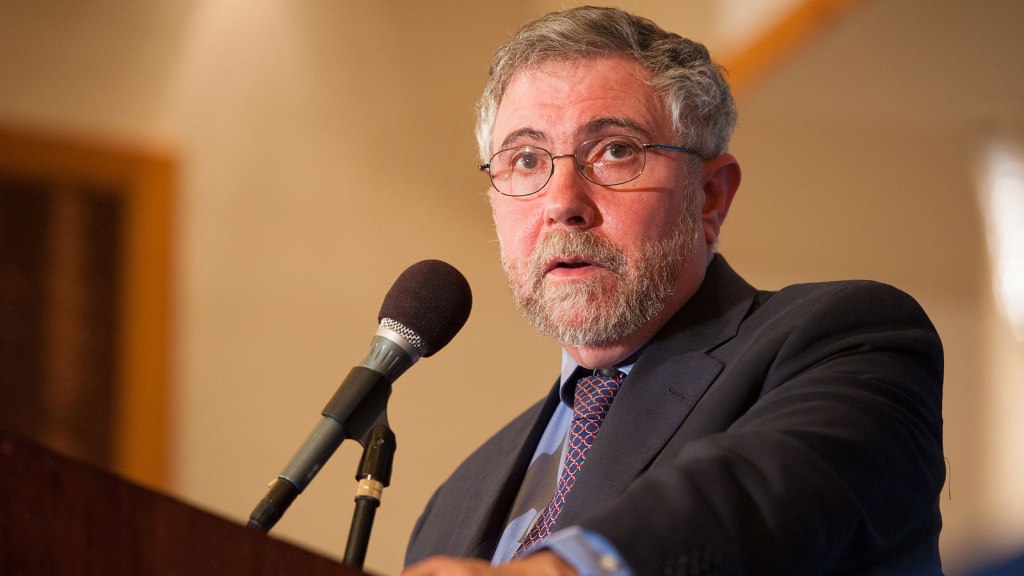 New York Times columnist Paul Krugman is irritated. He sees “anti-environmentalist conservatives, anti-capitalist people on the left, and hard scientists who think they are smarter than economists” coming together to claim that solving climate change will mean economic contraction or “degrowth.” It seems to be the “limits to growth” people who really bug him, and in a recent post he set out to rebut them.

I find myself vigorously ambivalent about the question of limits, so I don’t really have a dog in this hunt, but I thought Krugman’s post was unusually weak. He says that we can substitute other inputs for energy while still growing. In support, he offers a case of limited substitution — instead of more fuel for fast ships, we use more ships, going slower and saving fuel — and then just blithely assumes that substitution can go on forever. But doesn’t it take energy to make those extra ships? And finite building materials? And can you substitute more and more ships all the way down to zero carbon? Because that’s what’s needed. The example is wildly inadequate to the argument.

Nobody argues that there are no opportunities for efficiency, for getting equal or greater GDP with less energy input. The question is whether substitution can happen at the scale and pace needed to meet the 2C climate goal. “Reducing emissions” and “reducing emissions enough, fast enough” are two very, very different things. We can certainly do the first while maintaining economic growth. It’s the second that’s at issue.

Krugman has claimed several times now that tackling climate change will be cheap. I would like to see him address what I think is the strongest case to the contrary — strongest because it doesn’t rely on broad theories about limits, just widely accepted numbers from climate science. Perhaps Krugman is not aware of the case in question, so I will lay it out here, briefly, in the hopes he’ll grapple with it.

The case has been laid out in detail by scientists Kevin Anderson and Alice Bows in their paper “Beyond ‘dangerous’ climate change: emission scenarios for a new world.” I summarized their study in my post “The brutal logic of climate change,” which you can read if you want the long, chart-filled version. I’ll review the argument here in highly abbreviated form.

1. We want to limit global average temperature rise to 2 degrees Celsius or less. This is key. We don’t just want to reduce emissions, we want to reduce them enough to avoid serious upheavals and suffering. This, 2C, is the number the world’s policymakers and scientists have agreed is the threshold of danger; it is enshrined in the Copenhagen Accord, signed by the U.S. and every other major emitter.

2. Our “carbon budget” — the amount of carbon we can dump into the atmosphere this century before hitting 2C — is somewhere between 1,320 and 2,200 gigatons. To stay within that budget, global emissions will need to peak by 2020 and decline rapidly after that; instead, they are rising at around 2.5 percent a year, up 61 percent from 1990. (Many of the IAM models used in climate economics assume unrealistically low rates of emission growth and early emission peaks, Anderson notes, making their conclusions unduly optimistic.)

3. The carbon budget should be divided fairly. That means developing countries — which have done much less to cause the problem and remain much poorer on a per-capita basis — should get a larger share of it. If we allow developing countries until 2025 to peak their emissions, that means developed countries need to peak theirs by 2015 (er, next year) and then reduce them around 10 percent a year, every year, for the rest of the century. That is faster emission reduction than has ever been achieved, even in economic depressions.

4. Emission reductions of more than 3 or 4 percent a year are incompatible with economic growth. This is something Anderson says is reflected in most big climate models, Nicholas Stern’s and others, implicitly or explicitly. I don’t know if anyone has ever written about this particular aspect of models in any depth, but it’s a key issue. I plan to look into it more.

5. Thus, to hit 2C, developed countries will have to go through at least a temporary period of what Anderson and Bows call “planned austerity.” Exactly what that would look like or how long it would last is not made clear. (I interviewed Anderson about it recently and will write about that soon.) And “austerity” might be a misleading word — there will be contraction in some sectors but massive growth in others. Tons and tons of jobs will be created. If we measure things other than GDP, we may find some indicators rising while others fall. But overall GDP is likely to be static or declining.

Anderson emphasizes that nothing in the case above depends on his personal economic and policy preferences. It’s just a matter of stripping out overly optimistic assumptions and running widely accepted IPCC numbers through established models — “the maths,” as the Brits say.

I don’t want this case to be true. Nor do I view it as a happy excuse to condemn capitalism. To the contrary, I view it as vivid evidence that we are unlikely to stay below 2C and thus unlikely succeed in avoiding severe climate danger. We are likely, as Ezra Klein said, to fail.

If you want to claim that we can succeed in limiting temperature rise to 2C while also maintaining economic growth, you need to explain which of the five steps above is mistaken. That is the task I’d like to see Krugman tackle.