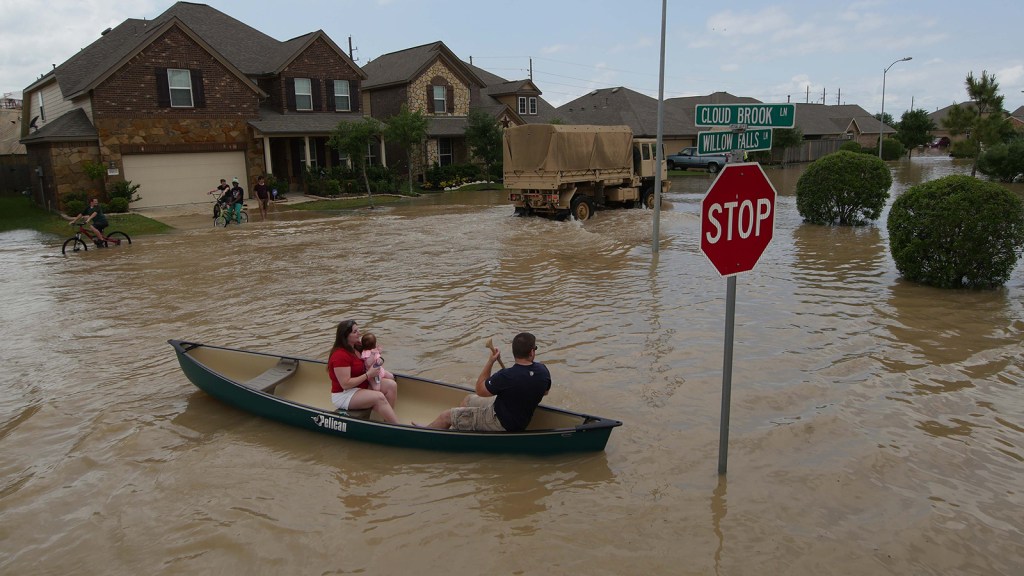 Flooding in Texas killed six over Memorial Day weekend, bringing the death toll from the state’s unprecedented floods this year to at least 14. The area surrounding Houston has been hit especially hard: On Sunday, about 2,600 inmates were evacuated from two southeastern Texas prisons endangered by high water, and evacuation orders were issued Monday for homes along the Brazos River.

Deluges like this aren’t exactly new to the area — downpours at this time last year brought a death toll of at least 30 — but as the climate warms, so does risk of flooding. In the past 30 years, reports the AP, the frequency of extreme downpours in the area has doubled.

“One likely cause,” Texas’ state climatologist John Nielsen-Gammon tells Grist, “is the increase in ocean temperatures from the Gulf of Mexico and tropical Atlantic. That determines how much moisture is in the atmosphere.” As temperatures increase, so does rainfall.

But it’s not just the rainfall that is endangering Houston’s citizens — it’s also ecologically irresponsible development.

Houston is the only major American city without formal zoning laws. As a result, developers have been free to pave over huge swaths of valuable wetlands that absorb runoff. Between 1996 and 2011, the amount of the Houston region covered in pavement increased by 25 percent, according to Samuel Brody, professor of urban planning at Texas A&M.

“Houston’s unique in that it’s a low-lying area barely above sea level,” Brody told Marketplace. “It’s originally made up of bayous and soils that don’t drain too well, and it’s a city that’s afflicted by flooding from both the sea, saltwater flooding, and rainfall-based flooding. The problem is not the environmental conditions, the problem is pavement.”

Beyond lives lost, there are financial costs to these disasters as well. Since 1998, FEMA has paid over $3 billion (adjusted for inflation) for flood losses in the area, according to the AP. And as floods worsen and paved areas expand, that’s a cost that promises to get worse.