It was only a year ago that Californians were marching into another relentless summer, having endured an almost water-free winter, and the entire western United States was stricken by drought. Even if you don’t live in this part of the world, you surely heard about it. Maybe you wondered how you would get avocados and almonds once California shriveled up. Who would make movies once the desert sands swallowed Hollywood? Who would fund Tinder for wombats when the last Silicon Valley venture capitalist succumbed to dehydration?

But then, the rain began to fall. Great big drops of water — thank you Jesus! — fell out of the sky. Texas flooded. Reservoirs in Northern California filled up.

Now the wet season is nearly finished in the West. So where do we stand? Is the drought over?

No, not by a long shot. California had pretty average precipitation this winter, a little above average in the north. Now there’s snow in the mountains and many of the reservoirs are full. But the state started out deep in water debt. To pay back that debt, California needs to refill its aquifers and replace all the groundwater we pumped out over the last few years.

Just to the east of California, in Arizona and New Mexico, it’s still very dry. After those storms in late summer and fall, “it just dried out completely, so our snowpack cratered,” said John Fleck, writer in residence at the University of New Mexico Water Resources Program. In the mountains of the Southwest, snow has been sublimating; that is, the snow simply disappears into the air instead of melting into the rivers.

Things improved in the Northwest — Washington, Oregon, and Idaho got the kind of precipitation that California and the Southwest needed. So the drought isn’t going away: It’s just slumping out of the Northwest and into the Southwest. 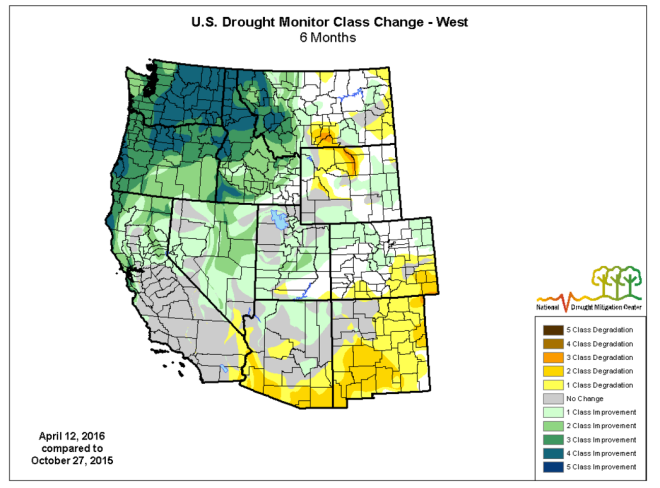 So how screwed is the West? Actually, not so screwed. Humans are just tremendously adaptive, Fleck points out. We’re darn good at figuring out tricks for getting by on less water. In the past, we’ve treated water the way we treat gigabytes today — as a cheap, plentiful resource. We’ve got a lot of room to make easy improvements.

So don’t worry. You’ll get your next Kevin Hart vehicle, and your Tinder for wombats, not to mention your avocados and almonds.

If you aren’t asking if humans are screwed, but instead inquiring about fish and forests, then … yeah. Those guys are hooped.

In California, record low river flows left 18 fish species wriggling on the brink of extinction. And thousands upon thousands of trees died, according to Ellen Hanak, director of the Water Policy Center at the Public Policy Institute of California. “We didn’t have a good game plan,” Hanak said. “We need to figure out where it is most important to really focus water.” If we better understood the low-water points that put various species in trouble, she said, governments could purchase water and increase flows at key places.

A little more than 2,000 wells went dry in California, primarily in Tulare County, where groundwater levels have been dropping for the last 50 years. People have been living off bottled water. But the real cause of these dry taps was inequality, not drought, as Laura Bliss showed in this excellent series. The houses that went dry are mostly in unincorporated communities that planners hoped would disappear if they cut off services; instead, these communities became refuges for the poor. Now California has better legal carrots and sticks to get local governments to push water out to those houses — and it’s happening now. Some 1,000 of the 2,000 dry taps are now flowing. 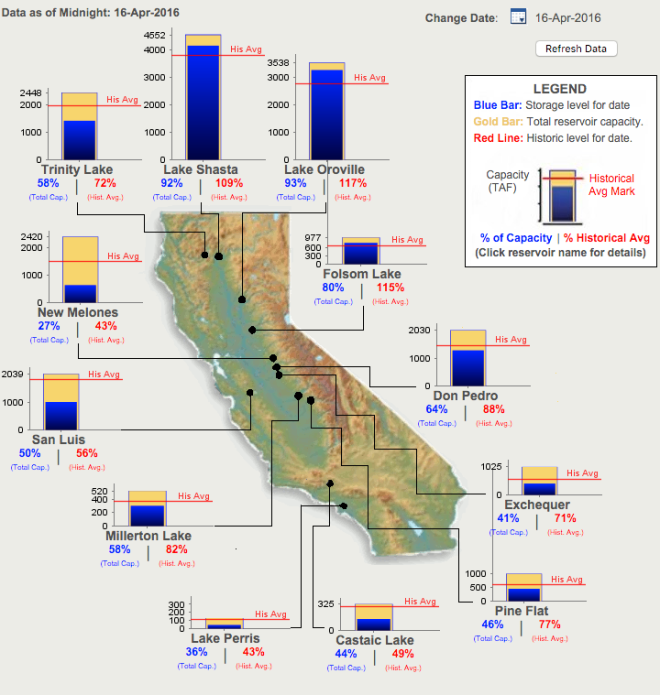 Reservoirs are full in Northern California, but still pretty empty in much of Southern California. In theory, water users in the south could buy water from the north, but that’s not going to happen. All water moving from north to south has to be pumped through the delta above the San Francisco Bay, and the pumps are already maxed out. There’s a plan underway to circumvent the delta bottleneck with pipes and tunnels — the Bay Delta Project — but it’s controversial, expensive, and mired in very tricky politics.

Low water years are nothing new in the West. But low precipitation combined with steadily rising temperatures are forcing people to cut down on wasteful practices. We’re adapting! Or at least rich and middle-class humans are adapting. The most vulnerable people, as well the most vulnerable ecosystems, will need help to adjust to the changing climate. We’ve started on that, but this drought has shown we’re still far behind.