“I write about science,” I said. “Mostly climate change.”

The performance artist let out a big sigh. “So, we really are fucked, aren’t we?”

I didn’t know how to respond. I write about climate change for a living. Still, I haven’t found any easy way to sum it all up. Yes, we are in trouble. But there’s still time to make things better for people in the future. Our descendants may well think we were the grossest, most debauched people who ever lived, especially if they find all those movies we made about cars.

What I do know is that we have to talk about climate change. A lot. So much so that it becomes a regular, matter-of-fact part of civic life. Boring, but the good kind of boring, where it’s something that people can talk about calmly without their brains shutting down.

America has a historical example that could prove useful: the remarkable shift that gayness made over 40 years from secret shame to next-door neighbor territory. Conversations made that happen, though they could get so awkward that gay rights organizations such as Parents and Friends of Gays and Lesbians (PFLAG) drew up rules for how to approach them.

Plenty of organizations have drawn up similar guides for talking about climate change. Grist has written a few, both about general climate conversation, and specifically about talking to climate skeptics. The climate communications consultancy Breakthrough Strategies & Solutions recently released an updated version of its own guide first published in 2012. Breakthrough’s guide was not designed to help you persuade climate skeptics. It’s aimed at motivating people who want to do something about climate change, but feel helpless about it. This new version also offers us a chance to see how messages about climate change mutate over time.

So, what’s changed? The 2012 version talked a lot about appealing to patriotism: America, for instance, can switch to a future with cleaner energy because America can do anything. Kathy Washienko, senior partner for climate strategies at Breakthrough, said that its researchers realized in 2014 that people were responding less enthusiastically to broad patriotic feeling than to appeals for local action. They liked the idea of communities taking control of their own energy production by putting solar panels on schools. Patriotism is still recommended, but something (Congress, mayhaps?) makes people think there’s more room for tackling climate change at the local level.

What stands out in this revised report is how much less rigid and specific it is compared to the average market research that crops up around political campaigns (“Here is your message. Say only this message”). It’s a script, sure, but a flexible one.

So how does Breakthrough recommend talking about climate change?

The group has broken a basic conversation into a triangle based on the top-performing messages. And because this is an environmental organization, someone had to make it look like the recycling symbol. The triangle is made of three concepts: The Threat, The Villain, and The Solution. 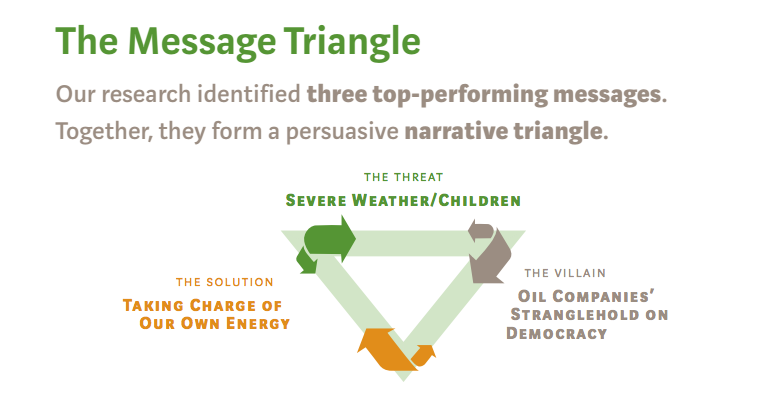 The guide encourages you to point out strange and severe weather conditions (“How ‘bout that drought/unseasonal ice storm/hurricane, fellas?”) then talk about how we have a moral obligation to keep our children safe from future events. Breakthrough has neatly summarized this section as “Severe Weather/Children.”

You may remember how, a decade ago, we all were the villain? Not anymore, because that was too depressing and also failed to acknowledge the real ways that oil companies have held back progress on clean energy and energy conservation. So now the villain is Big Oil, which is “spending billions of dollars to rig the system against clean energy solutions.” Don’t you forget it.

The solution is that we “take charge of our own energy.” That means we push to put more wind turbines on farms and solar panels on our roofs, instead of subsidizing oil companies, thereby “creating local jobs, stronger communities, and a more stable climate.” Focusing on local solutions also steers the conversation away from falling into the usual Democrat vs. Republican divide.

If you start the conversation, Breakthrough recommends going in this order: Threat –> Villain –> Solution. If someone else starts it, then you start at the most relevant point and make your way to the other two.

The report also offers sample responses to typical arguments. Say someone argues that renewable energy is more expensive than burning coal, and will therefore punish the poorest families. Tell them that the fossil-fuel industry isn’t exactly looking out for the poor right now, either. If someone argues that we need domestic coal and natural gas to be energy independent, you respond that real energy independence will be not having to use coal and gas at all.

All of these statements are vague, and Breakthrough describes that as a good thing. “Stay out of the weeds,” the report says. “Use a few supporting facts, but don’t battle over details (e.g. the number of jobs a given project may or may not create.) That’s not where we win. We win with shared values.”

Washienko said the latest suggestions were partly inspired by the early debate over the Keystone XL pipeline. “It would all come down to jobs,” she said. “Will this pipeline create 73 jobs? Or only 37? It would go back and forth and I remember thinking, ‘This is not where this conversation needs to be.’”

Instead, Breakthrough recommends only getting specific when it comes to personal experience. If you’re a firefighter, talk about how many more fires you have to put out compared to a decade ago. If you have a business that could be affected by climate change, talk about that. If you have kids of your own (or just kids in your life that you happen to be fond of), mention them as a motivation for doing something about climate change now, instead of leaving them to navigate a dystopian future ruled by menacing hordes of jellyfish.

But you should follow up any jellyfish dystopias with something positive, since the report advises ending any conversation on a high note.

There’s a fair amount of academic interest right now in conversation as a political tool. But we don’t need academics to explain the importance of conversation. What this report gives is a script for the kind of old-fashioned canvassing that was replaced by direct mail, email, and online clicktivism. Now that Obama’s two presidential campaigns have made canvassing a hot political organizing tool, the old ways are looking new again.

What’s in the new McNugget? No one will tell me.