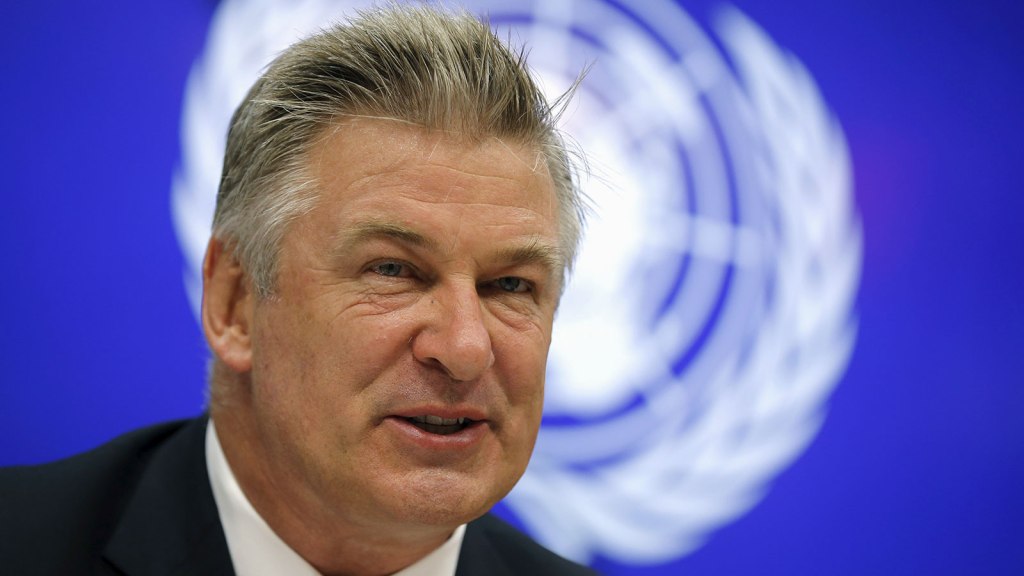 It wasn’t exactly the Oscars, but there was a star-studded award ceremony Monday night in Paris: the United Nations Development Program’s Equator Prize. Awarded this year to 21 indigenous and community groups and leaders from 19 countries, the Equator Prize recognizes the innovators making strides in poverty reduction and the protection of nature despite the manifold threats of climate change and extractive industries. One of this year’s prizes, for example, went to the South Central Peoples Development Association of Guyana, which has leveraged GPS units and drone technology to monitor and draw attention to deforestation in indigenous Wapichan communities.

The event was hosted in part by actor and environmental activist Alec Baldwin. Grist sat down with Baldwin before the event to get his take on the climate conference, American exceptionalism, and pouring vegetable oil into jet fighters.

Q.There are a lot of really wonderful people and initiatives being honored at the Equator Prize ceremony tonight, but at the same time, indigenous peoples continue to face myriad challenges with respect to climate change — and exclusion from these kinds of conversations. Do you come out of these kinds of events feeling more optimistic or more pessimistic?

A.I know that in terms of the issue of climate change, equipping and empowering indigenous peoples is a crucial component. Yes, energy conservation in the developed world, the way we deal with extractive industries in the developed and developing world — all of those things are important. But the Equator Prize, and my work here today, focuses on the role that indigenous peoples play as stewards of this land. Around the world, these people have been impacted by extractive industries — and their own governments, for that matter — and we’re here to recognize people that are changing that dynamic.

We’re in an era of “no place to hide.” There are drones and cell phones and computers, and all of this technology is finally beginning to be leveraged for empowerment and to show the rest of the world what’s happening out there. That’s a very good first step in protecting billions of acres in Indonesia, Central Africa, and South America. So I am hopeful. Because today is a day to recognize the progress of indigenous peoples in that component of the fight.

Q.You’ve written recently that you have faith in the COP21 process. Perhaps you’re speaking to a cynic, but I’m still curious about your optimism.

A.I think all of us, whenever we deal with a really difficult issue, project our own neuroses onto it. Which is fine: That’s what human beings do. In my case, that leads me to understand that the effects of climate change are going to be much more vivid in the next 15 to 20 years. Drought in Central Africa is going to exacerbate the migration issue beyond anyone’s conception. You think what’s happening now in Europe is significant? It’s going to triple.

I live in New York. I was there for [Hurricane Sandy]. I was there when all the power went off in Manhattan below 14th Street for a week. When the storm came, my wife was part of a team of people in my building that was walking the dogs of the elderly and bringing them food and prescription medicine because they couldn’t walk up and down 10 or 12 flights of stairs.

You hear people talk about islands slowly eroding and vanishing in the South Pacific. I live on an island. If we don’t act, it will vanish. That’s a fact.

So I lived with a small taste of the weather anomaly consequences of climate change in New York — but I witnessed a lot of positive community spirit come out of that experience.

A.I do, in that I think the pressure to bring energy to market, and the pressure to bring food to market — remember, in some parts of the world, clear-cutting is as much related to agriculture as it is to extractive industries — that pressure is unavoidable. People need to eat and they need to have power. But it’s the way we make adjustments for that now that counts. We will always be extracting petroleum products from the ground. That will never change. How much of it we use and how we use it can change.

I’ve been involved with the energy issue in the United States and abroad for over 20 years. What’s encouraging to me is that this one component of protecting indigenous peoples’ land and their stewardship of that land is truly important. And that it’s currently overlooked. In the United States, all we talk about is whether nuclear reactors are going to get extended licenses and whether or not coal-fired plants are causing acid rain and denuding land in the Northeast and whether the fact that gas is down to $2.35 a gallon means people are going to go buy a big car again. I’m an American, and Americans typically only see what’s happening in America.

The goal of this event today is to cast light on the people that are overlooked and ignored and cast light on their bravery and their wisdom. These people know these areas better than anyone. This is their land. There are absolutely similarities to the Native American experience in the United States. When we can give these people resources in this “no place to hide” time of ours, that’s a great accomplishment.

Q.Despite the American exceptionalism and the American horse-blinders you cite, you obviously have a deep sense of empathy. How can we expect other Americans to cultivate a similar sense?

A.I don’t expect the American people to jump up tomorrow and have the economy and terrorism bumped off their top 10 list by the concerns of indigenous peoples in Central Africa and Indonesia. What I’m saying is that for those of us that are concerned with this issue, we’re attempting to do some serious work in terms of climate change by casting the light we can — and I’m going to call that a victory.

Q.You seem to take a very realist approach. Saying that people are always going to burn fossil fuels as long as there’s oil in the ground — whether or not we’re adjusting that rate — runs counter to the idea that we need to set a red line: 100 percent renewables, no more fossil fuels, keep it in the ground. If you reject that argument, why do you reject it?

A.In that argument, there’s what I perceive as a best-case scenario bordering on fantasy. And then there’s one that I perceive as practical. They don’t have the technology now to fuel military operations with renewable fuel sources. You don’t see hybrid tanks. You’re not going to burn vegetable oil in jet fighters. You’re not going to go to the mess hall and take the grease from the french fries and pour it into your F-15 — that’s not going to happen. Knowing that there are certain quadrants of our society that will be burning petroleum products for many years to come, the question is elsewhere in energy production. With respect to utilities, to energy mix, to how much we extract and why and where and using what technology — that is something that will radically change in the next 20 years.

What gets hybridized and electrified and what doesn’t? I don’t know. But I do believe that reduction to specific targets is a very achievable goal. You will see massive drops in oil consumption. People are starting to get it.

In the meantime, casting this light with the Equator Prize is something I’m very drawn to. It’s not activist actors on David Letterman talking about what they think should happen. Here are real people on the ground living in an area that’s their home, fighting with governments and industry to defend their land. We’re here to recognize that contribution today.