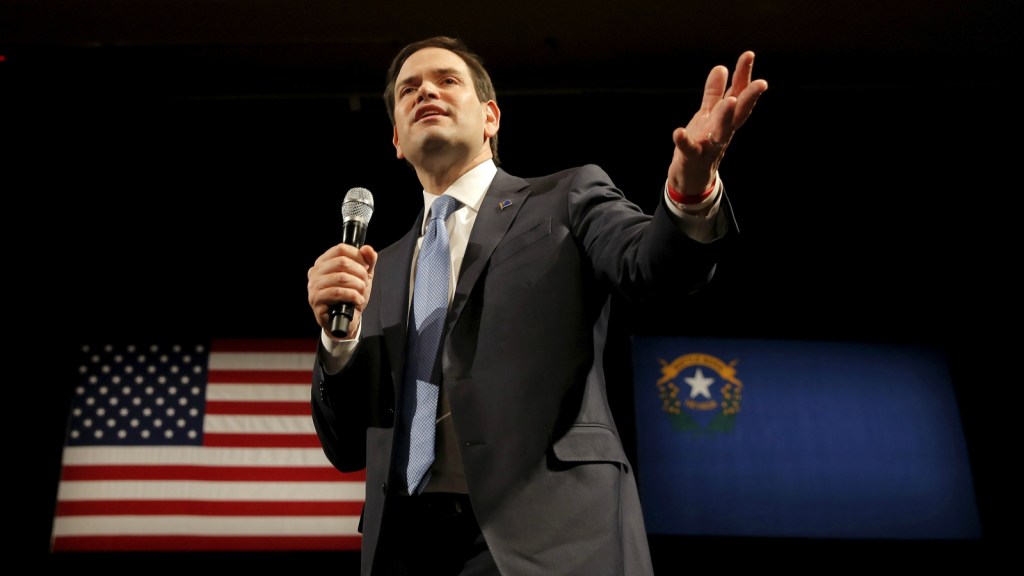 As political mega-donors all know, you get what you pay for. Still, the friendly policy treatment that rich individuals and their corporate interests receive in exchange for campaign donations is usually faintly disguised. The process is normally that Donor X gives to Candidate Y and, after winning, now-Officeholder Y makes decisions that are favorable to Donor X. But Officeholder Y can claim that he or she arrived at those decisions independently.

Marco Rubio is dispensing with the pretense of independence and turning his energy policy into a straight quid pro quo arrangement with fossil fuel interests.

The co-founder and former chief executive officer of Devon Energy Corp. has signed on to shape energy policy for Florida Senator Marco Rubio, who is running for the Republican presidential nomination.

Larry Nichols will lead Rubio’s energy steering committee. Nichols, who cut a $50,000 check to the super PAC supporting Rubio in December, also will host a Feb. 26 fundraiser for Rubio in Oklahoma, ahead of the state’s March 1 primary.

The oilman, who helped develop the combination of horizontal drilling and hydraulic fracturing along with developer George Mitchell a decade ago, says he is enticed by Rubio’s view that “the path to our energy future is not through regulation but through innovation.”

For a major donor to Rubio’s super PAC and fundraiser for Rubio’s campaign to oversee development of the candidate’s energy policy is little better than legal bribery. Give Rubio money and he will give you overt power over policy decisions that will affect your bottom line.

But shamelessness is on the rise in the GOP. Republicans have been breaking down any semblance of a barrier between the energy industry and their own policymaking. George W. Bush and Dick Cheney were oilmen themselves, but they were at least abashed by the fact — enough so that they tried for years to keep secret the records about Cheney’s energy task force meeting repeatedly with top oil industry executives By 2012, Mitt Romney saw no reason to be embarrassed about the fact that he was advised on energy policy by Harold Hamm, CEO of Continental Resources Inc., an oil and gas drilling company, and a donor to Romney’s campaign and the super PAC supporting Romney. Rubio is just following in Romney’s footsteps.

To be fair, Rubio already has a pro–fossil fuel, anti-environment agenda, because it’s what the GOP base and donor class want. Back in 2007, Rubio tacitly accepted the science of climate change, when the political winds were blowing in that direction, and he was kind of open to cap-and-trade, apparently because he thought it was inevitable, but he’s been a stalwart climate science denier in the years since then. In recent Republican presidential debates, he has repeatedly said nonsensical and dishonest things about climate change. He has already put out proposals to expand dirty energy production, such as approving the Keystone XL pipeline and expediting approval of liquefied natural gas export terminals. He also has pledged to undo Obama’s Clean Power Plan and undermine international climate negotiations.

How much worse could an oil baron make Rubio’s policy platform? We’ll find out.