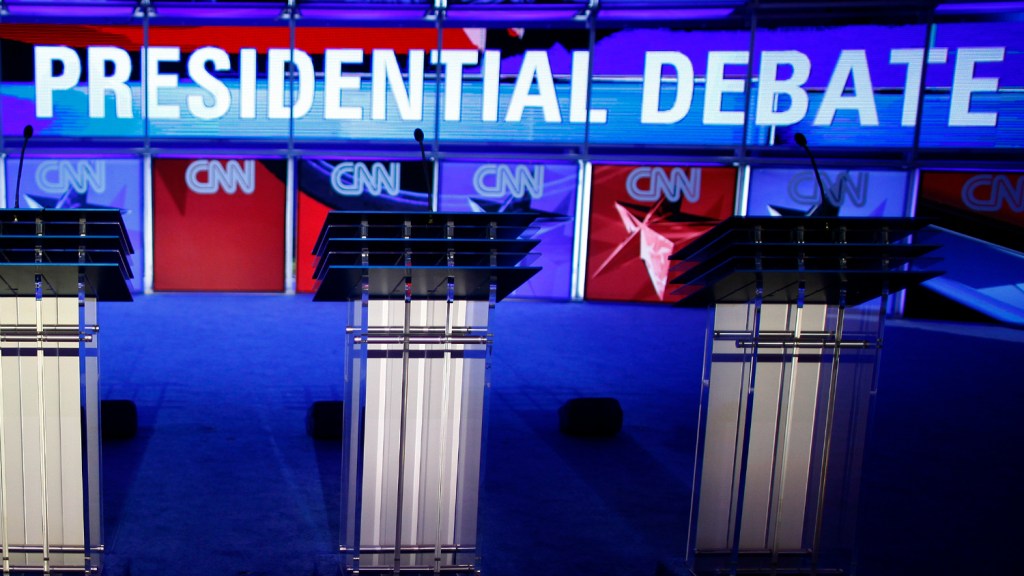 The pressure is on: Activists are pushing hard to make climate change a major topic in the Democratic presidential debates. The first of six planned debates will be hosted by CNN on Oct. 13.

Tom Steyer, the billionaire founder of NextGen Climate, sent a memo on Tuesday to CNN debate moderator Anderson Cooper arguing that he should devote significant time to the candidates’ climate plans. “To be a leader of the Democratic Party — and the country — you have to lead on climate change,” wrote Steyer. “During the first Democratic presidential primary debate, I urge you to push the candidates to articulate, defend, and refine their plans.” Steyer has previously called for the Democratic National Committee to add an entire debate devoted solely to climate change, a proposal that drew praise from 350.org founder Bill McKibben.

In the first Republican debate, climate change wasn’t discussed at all, and in the second it got just a few minutes out of three hours. Marco Rubio, echoed by Chris Christie, used the opportunity to argue against taking action to limit emissions using false talking points about the science, economics, and international politics of the issue. This is in keeping with the entire GOP field’s tilt toward climate science denial and aversion to doing anything to combat or even prepare for climate change.

The Democratic debates present an opportunity to address the issue more seriously. The leading three Democratic candidates have all staked out relatively strong positions on climate change, although Hillary Clinton and Bernie Sanders have yet to flesh out many crucial details. Clinton, also, has yet to convince many climate hawks that she will make a meaningful break from President Obama’s policy of increasing domestic fossil fuel production. Martin O’Malley, the former governor of Maryland, has released the most comprehensive and ambitious climate change policy agenda thus far. He is also calling for the DNC to add more debates.

Greg Sargent of The Washington Post concurs with Steyer that Democrats should talk in detail about climate change policy in their primary campaign even though hardly any voters list it as their No. 1 issue when asked by pollsters. Discussing climate change, Sargent argues, will have other benefits for the Democrats. He writes:

The more Democrats talk about this stuff, the more there is at least a chance that this contrast [with Republicans] will impress itself in some kind of meaningful way on voters. When candidates and/or elected officials talk about issues, it can make a difference, generating more media coverage that can help set the political agenda over time. And Dem primary voters do deserve to know more specifics about the contenders’ solutions: this would help further develop party doctrine on the issue; and promises made by candidates often are kept once in office.

Sargent also argues that “discussion of these issues in the high profile setting of a Dem debate would make for a compelling contrast with Republicans,” noting that the GOP candidates’ extreme positions on climate change might be hard to sustain in the general election. He’s certainly right about that. Most voters accept climate science and support some measures to limit carbon emissions.

But there’s a larger, deeper political dynamic in play here: The GOP’s commitment to an unpopular, outdated position on climate change isn’t some weird outlier but rather the epitome of its rejection of modernity and reason. And so by highlighting climate change, Democrats highlight Republicans’ backwardness more broadly.

As Jonathan Chait noted in New York magazine on Sunday, a new political science study looked at the platforms of political parties in nine major industrialized democracies and found that every one of the parties accepts climate science except for Republicans. But climate change is not the only issue on which the GOP stands apart from the rest of mainstream politics in advanced democracies. Republicans are also unique in their rejection of evolution and opposition to even modest gun control. None of these are issues that many voters list as their top priorities. The same goes for a number of lower-profile causes Republicans oppose and most voters support: embryonic stem cell research, funding for PBS and NPR, and so on.

Collectively, however, all of these issues contribute to the negative image of Republicans among some large, growing, and Democratic-leaning constituencies: young people, Latinos, and highly educated white voters. All of these groups were more evenly divided between the parties circa 2000 than they are today. In particular, George W. Bush’s emphasis on education reform was targeted at these voters. Bush lost these groups by smaller margins than John McCain and Mitt Romney later did. In the years since Bush first ran, the GOP has become more reactionary, more affirmatively ignorant, more contemptuous of expertise, more Foxified. Consequently GOP politicians are actually less likely to accept climate science than they were 10 years ago, even as the evidence grows only stronger.

The three current Republican presidential poll leaders, Donald Trump, Ben Carson, and Carly Fiorina, are the apotheosis of all these trends. Trump and Carson are climate science deniers. Fiorina opposes action to reduce greenhouse gas emissions and makes the same inaccurate claims — that the U.S. reducing emissions “can make no difference,” that shifting to clean energy is bad for the economy, and that China won’t do it even if we do — that Rubio does. She also incorrectly attributes the drought in California to environmentalists.

And, as you’d expect, all three make similarly stupid comments on other scientific topics and on social issues. Carson rejects the science of evolution and the Big Bang theory with nonsense arguments. He also says that a Muslim should not be president. Trump — in an expression of vulgar racism previously verboten among major Republican politicians — labels Mexican immigrants “rapists.” Fiorina goes around making demonstrably false claims about Planned Parenthood and reiterates her lies when confronted with the facts.

Taken together, these embarrassments reinforce an image of the GOP that threatens to condemn them to permanent minority status. Of all these issues, climate change looms largest. It threatens everyone, but it threatens the most vulnerable — the young, the poor, the disabled, the victims of structural racism — the most. To talk about climate change is to highlight the difference between the two parties, contrasting the Democratic focus on science and education, looking forward and outward, with the Republican tendency to be parochial, ignorant, and backward. Climate change is a stand-in for issues like gay rights, immigration, religious pluralism, funding for research and education, and traditional environmental issues like clean air and water.

Bringing attention to climate change should reinforce the Democratic advantage among groups like educated professionals, young people, and Latinos, all of whom helped form the Obama coalition. And if Democrats and climate hawks keep pushing the GOP on the issue, it could ultimately force Republicans to accept climate science and embrace climate action, just as years of successful Republican attacks on Democrats coerced them into supporting harsh anti-crime and welfare-reform laws. But to make that happen, Republicans had to talk incessantly about those issues. Now is the time for Democrats to talk incessantly about climate change.