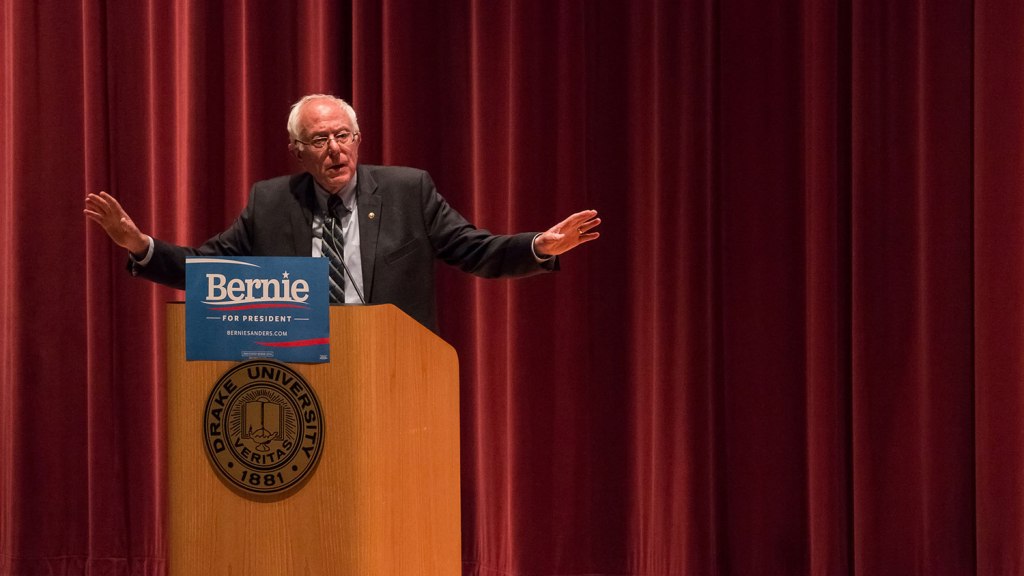 You might think that Bernie Sanders, a leading climate hawk in the Senate, would be talking a lot about climate change in his presidential campaign. You might expect that he’d see the potential to gain advantage over Hillary Clinton by pressing harder on environmental issues than she has. You might even think that when he speaks before conservative evangelical college students, he would bring up “Creation Care” and the biblical injunction to protect all of God’s creation, especially since he told Bill Maher that young voters are concerned about climate change.

You would be wrong. Sanders, who is leading the Democratic presidential polls in early-voting Iowa and New Hampshire, said earlier this summer that he would campaign on climate change, but so far he hasn’t.

Sanders has a strong record on climate change, one of the strongest in the Senate, according to the Climate Hawks Vote PAC’s scorecard. He has said, “climate change is the single greatest threat facing the planet.” He has been endorsed by Friends of the Earth. But he hasn’t embraced the issue on the campaign trail. Former Maryland Gov. Martin O’Malley has released a detailed agenda to combat climate change. Clinton has put out a set of renewable energy goals. Sanders hasn’t detailed any climate policy proposals other than announcing his opposition to Arctic drilling and reiterating his stance against approving the Keystone XL oil pipeline proposal. (O’Malley and Clinton both also oppose drilling in the Arctic, and O’Malley also opposes Keystone.) The climate change page on Sanders’ campaign website talks about very broad goals — “We must transform our energy system away from polluting fossil fuels” — and some of his past actions, but it offers no specifics as to what he would do as president.

Nor does Sanders typically emphasize clean air, environmental justice, or other green issues on the campaign trail, even when he is trying to reach strongly pro-environment constituencies like African-Americans.

When Sanders announced that he would be speaking at Liberty University in Lynchburg, Va., the conservative evangelical school founded by Jerry Falwell, it seemed like an ideal opportunity for him to roll out a climate action agenda, or at least to talk about the connections between economic equality and environmental justice. The promise of a strong pro-environment evangelical movement has never been fulfilled, but the media often hypes the possibility because there are good theological arguments as to why devout Christians should care for the Earth, and a handful of evangelical leaders are pushing the cause.

But speaking to Liberty U on Monday, Sanders didn’t mention climate change or any other environmental issues. His address stuck strictly to economic inequality. Evangelicals are mostly conservative on economic issues too, but while Sanders apparently believed it was worth trying to sway them to his side on inequality, he didn’t bother with climate.

Sanders quoted Pope Francis on economic equality, even though Pope Francis is head of the Roman Catholic Church and Liberty U is Protestant. And yet he didn’t mention the pope’s long encyclical from earlier this summer that focused specifically on climate change and tied the issue directly to inequality.

Here’s a key section of Sanders’ speech in which he argues that devout Christians can be progressive on economic regulation, with a biblical quotation:

In America today there is massive injustice in terms of income and wealth inequality. …

When we talk about morality and when we talk about justice we have to understand that there is no justice when the top one-tenth of 1 percent own almost as much wealth as the bottom 90 percent. There is no justice when all over this country people are working long hours for abysmally low wages, $7.25 an hour, $8 an hour, while 58 percent of all new income being created today goes to the top 1 percent.

Sanders went on in that vein but never tied it to the way the fossil fuel economy enriches the few and endangers the many. Is there justice when the Koch brothers, fossil fuel barons who are together worth more than $100 billion, reap profits from polluting the air and water that the poor breathe and drink? Is there justice when the world’s richest countries burn fossil fuels to grow richer and live in comfort while climate change hits the world’s poorest countries most severely? Sanders knows as well as anyone that there is not. But he neglected to say so.

Sanders closed his address at Liberty U by highlighting Francis’ anti-poverty, anti-materialist ideology. “I agree with Pope Francis when he says, ‘The current financial crisis … originated in a profound human crisis: the denial of the primacy of the human person! We have created new idols. The worship of the ancient golden calf has returned in a new and ruthless guise in the idolatry of money and the dictatorship of an impersonal economy lacking a truly human purpose.’” The pope made that statement in 2013. Francis has far more recently weighed in against materialism and economic injustice: It was the central argument of his encyclical calling for action on climate change this June. The pope argues climate change and economic justice are inextricably entwined. Leading thinkers of the left — Naomi Klein, 350.org’s Bill McKibben, and The Nation’s Wen Stephenson — say the same. Shouldn’t Bernie Sanders?