In a city dotted with cranes and shiny high-rise residences, it’s easy to miss the Holiday Apartments.

Located on a busy street in the Capitol Hill neighborhood of Seattle, the blue-green building has a simple, rectangular design. It’s only three stories high and has a modest 30 units. A clock with a sunburst design, located on the building’s side, provides a touch of pop — and hints at the building’s cool secret: There’s a solar farm on its roof. 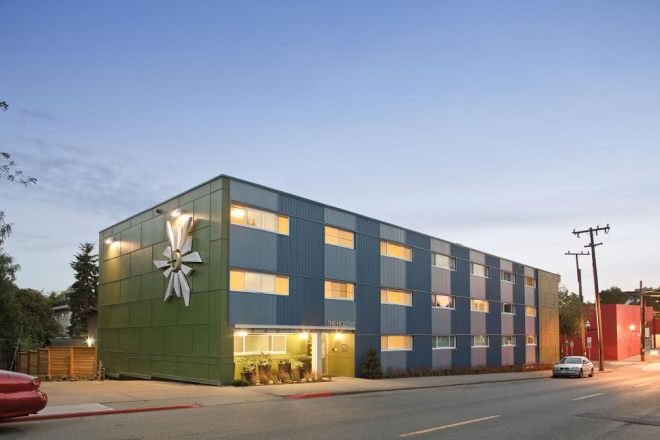 These days, a rooftop solar array may not sound like a big surprise, even in rainy Seattle. But here, there’s a twist: The array of photovoltaic panels may be the first of its kind to be built on the roof of an affordable housing complex — and its collaborative funding mechanism enables more people to contribute to, and benefit from, solar power. It’s a creative example of the real sharing economy: While participants don’t share tangible items like bike parts or strawberries, they do share in the wealth of the booming clean-energy economy.

All these projects turning sunlight into electricity will make money, by selling said electricity, collecting government incentives, or both. They wouldn’t be built otherwise (hello, capitalism). But solar panels require a large upfront investment and some property to put them on, resources that many people don’t have. Even as the price of rooftop solar falls precipitously, an entire residential system typically still amounts to $10,000 or more. A home to put the panels on, of course, costs hundreds of thousands in most of the United States.

Clean energy on the grid is good for everyone — because, you know, climate change — but the rewards are not evenly distributed. Solar power and the wealth it creates, it turns out, aren’t as simple to share as, say, underused tools or rides.

That’s a problem. After all, as the climate movement’s star author Naomi Klein says, “We’re fighting for the principle … that the people who got the worst deal in the old economy should be the first in line to benefit in the new economy.” How can the benefits of the solar boom reach those who can’t afford to buy or lease solar panels — or buy property to put them on?

The solar farm atop the Holiday Apartments is an attempt to address this very dilemma. Public utility Seattle City Light and community group Capitol Hill Housing teamed up to create the 25-kilowatt array, known as the Capitol Hill Community Solar Project.

Community solar projects allow people who don’t have sunny enough roofs, or who don’t own their own properties, to buy in to a solar farm that’s constructed elsewhere and save dough on electric bills based on the power that’s generated. These community clean-energy systems empower all participants to share financing, earnings, and risk. The minimum buy-in for a community solar program typically runs from $500 to $1,400: not cheap, but not tens of thousands of dollars, either.

Here’s how the Capitol Hill project works: For $150, any customer of Seattle City Light can buy “solar units” from the utility, which fronted the capital for the panels and installation. Each unit represents 28 watts of the array’s more-than 25,000 total. As the project produces electricity, it makes revenue by selling said electricity back to the grid, and more so by raking in some of Washington state’s super-generous incentives for producing solar power. Participants earn a share of that revenue, which is shaved off their electric bills. City Light customers that buy solar units will likely make back a little more than their original investment by the time the program ends in 2020, when the state stops giving away $1.08 per kilowatt-hour to community solar projects with Washington-assembled panels and components.

“What I really like a lot about the utility being the owner is that we can make that participation level so small,” says Suzanne DuRard of Seattle City Light. “One-hundred-fifty dollars is smaller than what you’re going to get in a community solar project elsewhere.” The utility started experimenting with community solar in 2011 and currently has four projects up and running.

Seattle City Light started selling units of the Capitol Hill Community Solar Project in October 2014. By Thanksgiving, the panels were up and producing power. As of April 2, about 85 percent of the 925 available solar units have been purchased by City Light customers, including seven local businesses that became “solar sponsors.”

Although that may seem like a smashing success, a recent Capitol Hill Seattle Blog post reported that sales are slower than for previous community solar investments offered by the municipal utility. And none of the Holiday Apartments residents have bought in to the project. In fact, not one tenant of Capitol Hill Housing’s 48 affordable housing properties participates in Seattle City Light’s community solar program, according to the utility.

What gives? Well, community solar projects, as capital investments, face some of the same difficulties as other energy ventures. In short, it takes money to make money.

The lack of participation from Holiday Apartments residents hints at what Grist’s Brentin Mock calls “environmental gentrification”: “Neighborhood improvements like upgraded sewage infrastructure, LEED-certified green buildings, and bike lanes are great, but, counterintuitively, they can freak out residents of under-resourced communities who fear that such projects might price them out.”

Still, Capitol Hill Housing hopes that putting a solar setup where low-income residents can actually see it will spark interest in cleaner energy. “It’s more useful as a conversation opener,” says Joel Sisolak, who directs the group’s neighborhood sustainability initiative. Adds Jason Coughlin, a solar specialist at the National Renewable Energy Laboratory, “Kudos to Seattle City Light for locating it on the premises.”

DuRard shared insights about City Light’s program on a call with utilities from all over the country a few weeks ago. Even though the rules for community solar differ substantially state by state, she says, “People still had a ton of questions about marketing, interest, and how to get to their customers, because they’re hearing it from their customers.”

A handful of organizations and initiatives elsewhere are working to bring solar to the masses, too. Crowdfunding platform Mosaic, based in Oakland, Calif., connects people going solar to investors who can lend them some money — as little as $25 — to make it happen. GRID Alternatives, also out of Oakland, doesn’t just hook up low-income folks with solar systems for little-to-no upfront cost — the nationwide nonprofit puts up those panels with volunteers and job trainees, providing education and hands-on experience. And Colorado’s community solar gardens legislation requires that at least 5 percent of each project is allocated to low-income residents.

John Farrell of the Institute for Local Self-Reliance, who’s written plenty for Grist about solar, says more shared solar power means more power to the people. “I see community solar — and solar installations in general — as not only a democratizing force in terms of economics, and sharing the wealth of energy production, but also in terms of the politics,” he says, “making people aware that we can make different energy choices than we’ve made in the past and the power doesn’t have to reside in the same utility.”

Hey, if notoriously sun-starved Seattle can bank on solar, places like Florida will soon be out of excuses.