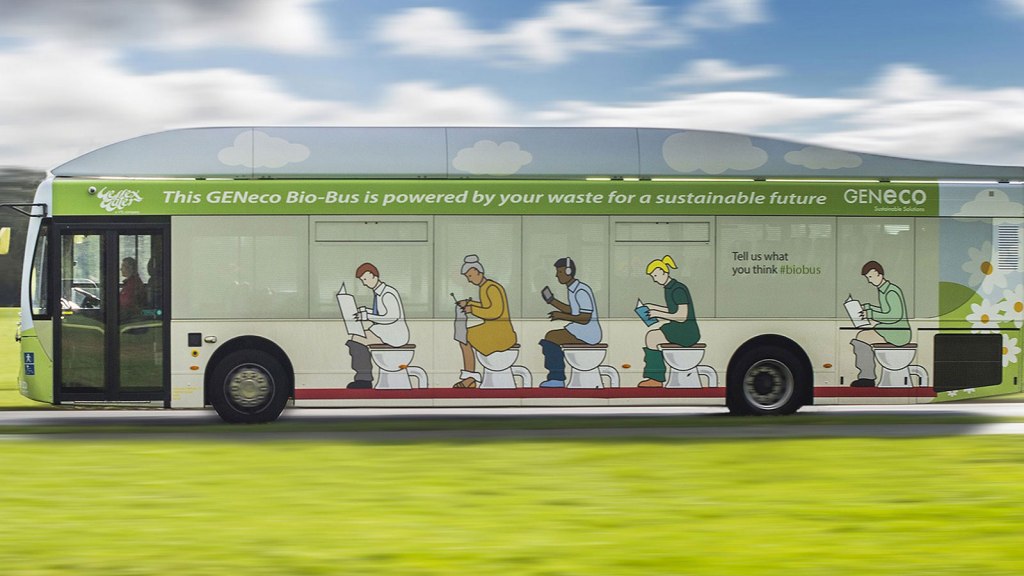 A bus that runs on gas made from feces and food scraps makes its maiden voyage today. Bath Bus Company’s new crapmobile delivers passengers along the No. 2 line between Bath and Bristol Airport.

Here’s The Guardian, on what it calls the U.K.’s first poo bus:

Hold up. Burning turds and rotting foodstuffs will improve air quality in cities?

The 40-seat “Bio-Bus” runs on biomethane gas, generated through the treatment of sewage and food waste. It can travel up to 186 miles on one tank of gas, which takes the annual waste of around five people to produce.

OK, so they’re not filling up the tank with actual turds.

The gas is generated at Bristol sewage treatment works, run by GENeco, a subsidiary of Wessex Water. It produces fewer emissions than traditional diesel engines and is both renewable and sustainable.

Sustainabuzzwords aside, the fact that shit fuel pollutes less than fossil fuel paints an unpleasant picture of just how dirty fossil energy really is.

GENeco’s biofuel plant not only gases up the airport shittle, I mean shuttle, but also supplies the national gas network with enough fuel for 8,500 households. That’s good news, since those homes, like most, otherwise meet heating and cooking needs with natural gas, one of those climate-warming fossil fuels.

Yesterday — World Toilet Day — came with a reminder that billions lack a Super Bowl to which to take the Browns, so to speak. (And access to sanitation is not only a poor-country problem; check out this map of San Francisco’s sidewalk stools.)

Today, the butt-mud bus gruntingly calls out supposedly modern waste systems for treating (toilet) treasures like trash. From fertilizer to fuel, the fruits of our feculence and food refuse are making “human waste and food waste” sound like quaint fogeyisms.