A North Carolina businessman is wading into the 2016 big-money slugfest, planning to spend $175 million to back action on climate change. But unlike Tom Steyer and the other big donors focused on the issue, this guy is a Republican. And though he hopes to influence the candidates, he also hopes, more generally, to change the conversation Republican voters are having.

“There’s a lot of good solutions, but we are not going to get there if we keep arguing about the problem,” the donor, Jay Faison, told Reuters.

With the exception of South Carolina Sen. Lindsey Graham, who is a long-shot candidate, and former New York Gov. George Pataki, who is a really long-shot candidate, the Republican presidential contenders all either dodge questions about or outright deny climate science. “Here’s a question you need to ask everybody running as a Republican: What is the environmental policy of the Republican party?” Graham said on CNN’s State of the Union this Sunday. “When I ask that question, I get a blank stare.”

Faison has contributed $25,000 to Graham’s campaign, and $50,000 to a PAC supporting Jeb Bush. Bush has at least said he’s “concerned” about climate change, though he continues to waffle. Faison told Politico that he has not yet decided which candidate to endorse.

Faison thinks a good chunk of Republican voters do care about global warming. He, for instance, came to his views because his love of hunting and fishing begat concerns about the environment. He’s launched a new organization, the ClearPath Foundation, that has a list of recommendations for what environmentally conscious conservatives can do to fight climate change — including rooftop solar installation and environmentally conscious investing. (True, they aren’t the kind of drastic measures we need to actually deal with climate change, but plenty of Democrats aren’t endorsing drastic measures either.)

And the polling — at least some of it — supports his position. According to a poll by the Yale Project on Climate Change Communication, 56 percent of all Republicans support regulating carbon dioxide as a pollutant: 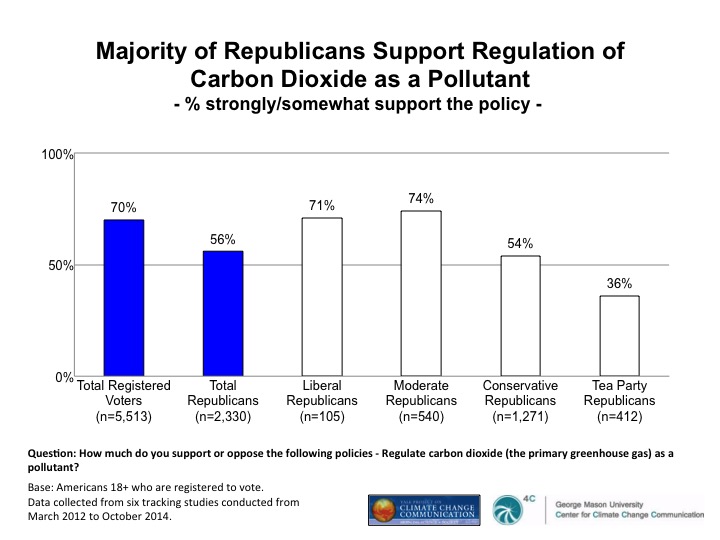 A separate poll by The New York Times, Stanford University, and research group Resources for the Future arrived at similar results, and a Washington Post-ABC News poll found that younger Republicans are particularly supportive of climate action.

Even if Republican politicians almost universally decry Obama’s executive actions on climate change, some policy-minded people on the right are trying to figure out an answer to Graham’s question: What should Republicans do instead? There’s some support among conservative wonks for a market-based solution — like a carbon tax — as an alternative to EPA regulation. And some Republicans on the front lines of climate change, like in Florida, are also increasingly admitting that a discussion needs to happen.