This was the climate debate we’ve been waiting for 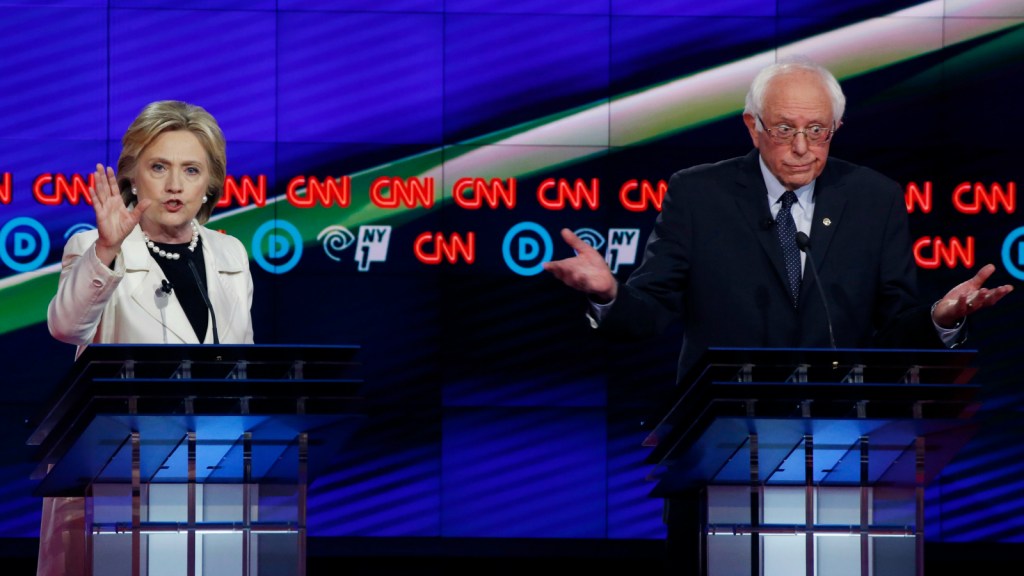 This was the climate debate we’ve been waiting for

Savor it, climate hawks. Global warming had its short and sweet 15 minutes of fame in the ninth — and likely final — Democratic primary debate on Thursday night.

Bernie Sanders and Hillary Clinton had an intense exchange at the CNN/NY1 debate that got to the heart of the two candidates’ different philosophies on climate action. Not only did they scuffle over a topic that has been in the headlines recently — Clinton’s donations from fossil fuel interests — but they also got into it over Clinton’s support for fracking as secretary of state, the merits of a carbon tax, the Paris climate agreement, and the role of nuclear energy.

Here are the highlights:

They agree climate change is a problem: Clinton’s first point on the topic was, “we should talk about it in terms of the extraordinary threats that climate change poses to our country and our world.” And Sanders said: “You know, if we, God forbid, were attacked tomorrow, the whole country would rise up and say we got an enemy out there and we got to do something about it. That was what 9/11 was about. We have an enemy out there, and that enemy is going to cause drought and floods and extreme weather disturbances.”

But they have different philosophies about how to address it: Clinton’s bottom line was that she’ll stay the course set by the Obama administration, particularly on the Paris climate agreement and power plant regulations. “President Obama moved forward on gas mileage; he moved forward on the Clean Power Plan,” she said. “He has moved forward on so many of the fronts that he could given the executive actions that he was able to take.”

These accomplishments deserve support, she argued, particularly as they’ve come in the face of hostility from a GOP-controlled Congress. She added, “It’s easy to diagnose the problem. It’s harder to do something about the problem.”

But Sanders wants to think bigger when it comes to climate politics. “This is a difference between understanding that we have a crisis of historical consequence here,” he said. “Incrementalism and those little steps are not enough. Not right now. Not on climate change.”

On a carbon tax: Sanders, who has cosponsored a carbon tax bill and called for it as part of his platform, kept pressing Clinton on whether she supports such a tax. His opponent never exactly answered. She pointed to her clean energy proposals to build on the Clean Power Plan, saying, “I don’t take a back seat to your legislation that you’ve introduced that you haven’t been able to get passed. I want to do what we can do to actually make progress in dealing with the crisis.”

On fossil fuel contributions: Moderator Wolf Blitzer asked Clinton about Sanders’ charge that she’s in the pocket of the fossil fuel industry. She responded, “we both have relatively small amounts of contributions from people who work for fossil fuel companies … But, that is not being supported by Big Oil, and I think it’s important to distinguish that.”

On fracking: Sanders opposes fracking, and called attention to Clinton’s record in the State Department of pushing fracking abroad and promoting natural gas as a climate change solution. Clinton called natural gas “one of the bridge fuels” to cleaner energy — a comment that’s sure to make fracking opponents cringe. “For both economic and environmental and strategic reasons, it was American policy to try to help countries get out from under the constant use of coal, building coal plants all the time, also to get out from under, especially if they were in Europe, the pressure from Russia, which has been incredibly intense,” she said. “So we did say natural gas is a bridge. We want to cross that bridge as quickly as possible, because in order to deal with climate change, we have got to move as rapidly as we can.”

On nuclear: Moderator Errol Louis asked Sanders how he expects to address climate change if he supports phasing out both natural gas and nuclear energy, considering that the latter provides 20 percent of U.S. power. Sanders admitted, “you certainly don’t phase nuclear out tomorrow,” and pointed to his 10 million solar roofs program.

This is probably the only time we’ll see climate change get so much attention in a presidential debate this year. Too bad it didn’t happen earlier in the campaign season, but better late than never.