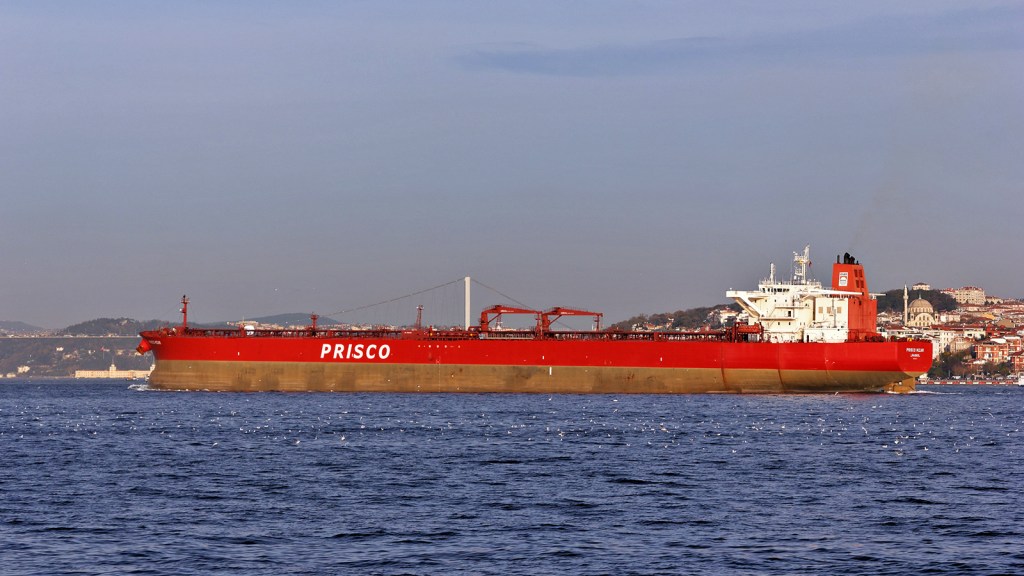 Sixty-three percent of the world’s oil travels around on giant sea-faring pollution machines that degrade air quality, interrupt local ecosystems, and have a nasty habit of leaching a heinous black sludge into the environment. And they do all this while traveling through a handful of tight passageways known as choke points.

According to Smithsonian, these choke points tend to lie in regions that are both politically unstable and especially vulnerable to environmental disruption. Check out this interactive map from the mapping company Esri to see where these choke points lie and how many millions of barrels of oil pass through each one every day — 17 million through the Strait of Hormuz in the Persian Gulf; 15.2 million through the Strait of Malacca between Sumatra and the Malay Peninsula; 3.8 million through Bab el-Mandeb near Yemen.

Here’s more from Smithsonian on why these choke points are a big problem:

The most obvious impacts are from oil spills, a particular risk at chokepoints where high traffic and tricky geography make safe navigation difficult for tanker ships, which average near the size of the Empire State Building. Chokepoints are also in close proximity to coastal ecosystems and sometimes to large human populations, such as in the Turkish Straits, which bisect Istanbul.

The Turkish Straits and surrounding waters have witnessed hundreds of maritime accidents and several significant spills over the decades. Their consequences, paired with onshore developments and other shipping-produced oil contamination like ballast and bilge water releases, have wreaked havoc with a fragile aquatic environment. Marine species have paid a heavy price, from tiny crustaceans to larger fish species that once filled increasingly empty nets.

Oil barges also have a nasty habit of transporting marine species from one habitat to another, where said species then wreak havoc on local ecosystems. And in some places, the giant ships can also dredge up metals from the seafloor, disrupt the acoustic communication of marine species, and emit harmful air pollution, Smithsonian reports:

Tankers and other cargo ships often burn high-sulfur bunker fuel, banned on land and in some coastal waters including those around the U.S. because it creates large amounts of air pollution. Crude oil takers also emit volatile organic compounds like methane and heptane into the atmosphere when crude is loaded, stored and transported. The Norway-based research organization SINTEF estimates that emissions from a typical 100,000-ton tanker load represent 2,200 barrels of oil.

But there is a silver lining to all of this. Sarah Ladislaw, director of the Energy and National Security Program at the Center for Strategic & International Studies, told Smithsonian that since the world loves oil so much, it’s in everyone’s best interest to play nice and keep these politically precarious choke points in working order.

Right. And the silver lining to my french fry addiction is that it keeps my hands moisturized. I’m guessing there’s a better way to do both.