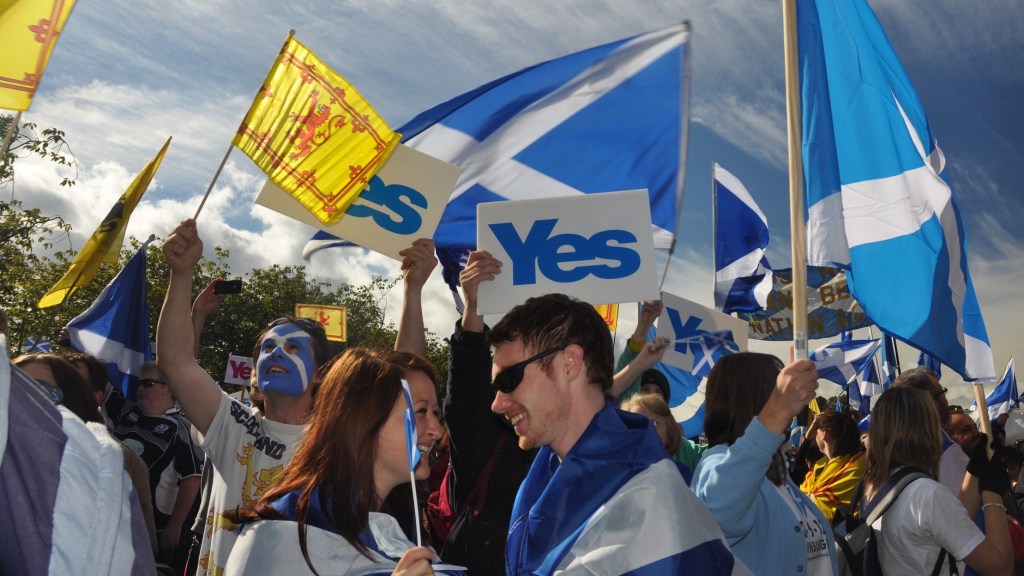 As you’ve no doubt seen by now, Scottish voters are heading to the polls to decide whether to break free from the United Kingdom and chart an independent course for the first time in 307 years. A record number of voters are expected to turn out — 97 percent of the adult population, or more than 4.2 million people, are registered. Rugged, remote and sparsely populated as the country is, the actual ballots will take some time to be trucked, boated, helicoptered, and fully counted: Results are likely to come in early Friday morning, U.S. time.

One of the big unknowns if Scotland votes “Yes” is what will happen to the U.K.’s climate and energy goals. The countries are interconnected and interdependent, relying on each other’s infrastructure (the wires, the interchanges, everything) and resources (oil, gas, and wind) to power their economies. How that pie gets carved up remains a source of debate and confusion.

Here’s what we know (and what we don’t know) about what will happen to Scotland and the U.K.’s energy mix and their ability to reach renewable energy targets and to combat climate change if the two go their separate ways.

Will the U.K. still be able to get 15 percent of its energy from renewables if Scotland leaves?

Scotland produces a lot of green energy. It generates over a third of the U.K.’s renewable electricity, according to the latest government numbers. Carbon Brief, a London group that tracks climate policy, says that Scotland provides 43 percent of the U.K.’s wind capacity and 92 percent of its hydroelectric power. So, in theory, losing Scottish energy sources would make the power supply for the rest of the U.K. “less green,” the group says. That could be especially problematic given that European Union rules will require the U.K. to get 15 percent of its energy from renewables by 2020.

“Without the windier onshore and offshore conditions in Scotland, the rest of the U.K.’s ability to meet the target might diminish significantly,” says Simon Moore, a senior research fellow at Policy Exchange, a think tank in London. But that may not actually happen. Moore thinks it’s likely that even if Scotland becomes independent, its energy market will remain tied to the U.K.’s. “Odds are that an independent Scotland and the remainder England and Wales would continue to operate an integrated electricity market — similar to the ‘Single Electricity Market’ that is shared by the Republic of Ireland and Northern Ireland,” he explains.

Still, Moore warns that it’s far too early to know how this issue will be ultimately decided. “No decision has been made — and I doubt any more than preliminary thinking has begun — on how the target might be divided up if Scotland leaves,” he says.

Who will pay for Scotland’s green energy sector if the U.K. stops subsidizing it?

Scotland’s renewable energy development is subsidized by the entire United Kingdom — to the tune of £560 million (nearly $913 million) in the most recent tax year, according to Bloomberg. If the U.K. puts a stop to those subsidies — as it appears to be threatening to do — Scotland would have to get that money from somewhere else.

According to the U.K. Department of Energy and Climate Change, Scotland would need to spend £1.8 billion (nearly $3 billion) to meet its goal of getting 100 percent of its electricity from renewables by 2020. Without the U.K. subsidies, the British government warns that the additional burden could be partly carried by Scottish rate payers. “Our analysis shows that Scottish consumers are up to £189 ($309) better off in the U.K. as the broad shoulders of the Union allow us to spread energy costs more evenly,” a department spokesperson said, as quoted by the BBC.

DECC Secretary Ed Davey said in April that the rest of the U.K. would not have to “support an independent Scottish state’s energy costs to ensure its own security of supply.”

The Scottish “Yes” campaign counters that they’ll be able to work out a deal that benefits both countries, with the U.K. continuing to fund renewable energy north of the border and, in return, importing some of that low-carbon electricity, according to Carbon Brief. Again, we’ll have to wait and see.

Is North Sea oil and gas really the key to Scotland’s economic independence?

The North Sea has been a source of oil and gas for the U.K. for four decades. The “Yes” movement argues that those resources will help ensure the financial security of an independent Scotland. According to Carbon Brief, the Scottish government says it would be entitled to 90 percent of future North Sea oil and gas tax revenue, and this has been a central feature of the “Yes” campaign.

“The reality is North Sea oil and gas will be with us way beyond 2050,” Alex Salmond, Scotland’s first minister and the face of the “Yes” campaign, said during a televised debate. “Every other country in Europe would give its eye teeth to have North Sea oil and gas. It cannot be regarded as anything other than a substantial asset for Scotland.”

But the amount of money Scotland can get from the sea is highly disputed. “The ‘Yes’ campaign estimates revenues from the North Sea in 2018 to be twice as large as the U.K. government does,” Moore said. And what’s more, he adds, the oil and gas field is in “sharp decline.”

“The U.K. has gone from 100 percent self-sufficient to around 50 percent domestic gas production in less than a decade,” Moore said. “There may be some scope to develop new fields or scrape a few more drops out of old ones here and there as technology improves, but the broad trend is one of declining production volumes.”