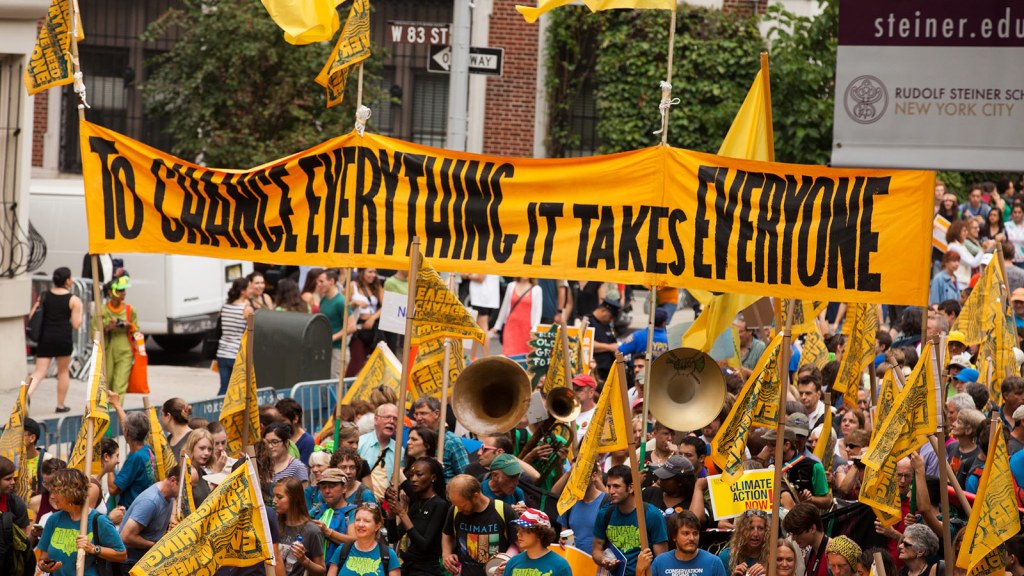 The climate march that took place in NYC (and elsewhere) on Sunday was fantastic. It was thrilling to see so many people gathered together for a cause. In the process of organizing and marching, tons of social capital was created — connections made, bonds strengthened, seeds planted. It was a signal to policymakers the world over that lots of Americans are taking this seriously. It was a shot of solidarity for people facing up to what can feel like an unsurmountable challenge. For those and many other reasons, the march was awesome, a real triumph for the movement, despite what all the ankle-biters have said.

Having gotten that out of the way, I’ll now resume saying depressing sh*t.

To be clear, this is no criticism of march organizers, who would have been over the moon to have more Republicans. They deliberately kept the march’s message broad, avoiding specific policy demands, to allow a wide range of people to participate. I’m not one of the many back-seat drivers who blames climate hawks for the right’s intransigence on this issue. The right is to blame for the right. And right now, the right is unreachable on climate change.

But the fact remains that the diversity on display was, broadly speaking, diversity within the left. That’s not a bad thing. The left contains multitudes and is stronger for it; it should be proud! There were many kinds of people represented in the march, many interests, many colors, many origins, but they all shared core beliefs — climate change is a serious problem and concerted government action is necessary — that are utterly rejected on the American right, for all intents and purposes unanimously.

Now, you’d think having a large, broad, vocal constituency would matter in democratic politics. But in America, you’d be wrong. To understand why, it helps to read Nate Cohn’s recent piece, “Why Democrats Can’t Win the House.”

In 2012, if you add up all the individual races for the House of Representatives, Democrats received more votes than Republicans. Some 55 million Americans cast their vote for a Republican, while 56 million voted for a Democrat. And yet, Republicans won a majority, by 33 seats. How can Democrats get more votes but win fewer seats?

Conventional wisdom says that the 2010 redistricting undertaken by John Boehner’s House massively tilted the playing field to the right by gerrymandering districts that would favor the GOP. There is undoubtedly truth to this — see Sam Wang for more.

Cohn’s point is that gerrymandering underdetermines the GOP victory. He says something else is going on too: Democrats are herding to cities. This gives Dem presidential candidates huge margins in big cities (Obama got 80 percent), which allows them to win states with big cities in them. That’s all fine and dandy for presidential elections. But for House elections, clumping in cities doesn’t help Dems, it hurts them. They decisively win urban districts while losing much more numerous suburban, rural, and Southern districts (some of which, at least, they used to compete in). Lots and lots of Democratic votes are “wasted,” creating supermajorities for Dems who don’t need supermajorities and leaving non-urban Dems stranded.

If these trends continue, Cohn concludes …

… Democrats might be forced to wait for demographic and generational change to spread beyond urban centers and suburbs, giving the party a chance to build a more decisive majority. Until that happens, the long-anticipated Democratic majority has little chance of enacting the most ambitious elements of its agenda.

Now, the precise role of gerrymandering vs. geographic sorting is a matter for political scientists, but the upshot is the same: Most Republican reps come from heavily Republican districts. They have much to fear from their right flank. Eric Cantor — House leader and soulless apparatchik Eric Cantor — was picked off in a primary challenge recently over some minor, possibly imagined heterodoxy, the latest in a long string of insufficiently groupthinky Republicans to be taken out by the Tea Party (or as it used to be known, the conservative base). Republicans in Washington live in terror of the right. By contrast, they have nothing whatsoever to fear from the left, which constitutes a rump minority where they’re from. All the incentives push one way.

As long as climate sanity is defined as heresy in the epistemologically vacuum-sealed Fox bubble, no conservative lawmaker will touch it with a 10-foot pole. It doesn’t matter if you get a million or 10 million people marching in the streets — as long as you don’t get any of the resentful white guys who vote Rs into office, Republican reps won’t care. To see all those unions and brown people and professors and feminists and queers gathered in one place, shouting for an international treaty, just confirms their worst fears. (Of course, to be a conservative in America today just means having your worst fears confirmed 24 hours a day.)

Democrats have a solid and growing majority in presidential elections. Absent some exogenous event like another depression or terrorist attack that activates people’s lizard brains, I expect Hillary Clinton to win, probably twice. But Republicans are almost certain to keep hold of their House majority for the duration of her administration. And because America is burdened with a stupid, outmoded presidential system — a House and president, both with a claim on political legitimacy, both able to utterly stymie the other — the result is likely to be gridlock. Marches and other protests won’t substantially change that dynamic.

Now, what marches and organizing can do is strengthen the resolve of the many Dem lawmakers who are notionally, but not really, on the side of climate action (which includes most of them). Agitate their constituents and you can move them from climate sparrows to climate hawks. Unify the entire left around climate action — one of the march’s explicit goals — and you’ll get much more of it in those places where Dems do have the power, often at the city or state level. Climate hawks are on the verge of making the Pacific Northwest a large, vibrant, wealthy area of the country that powers itself entirely without coal. That’s no small thing.

But the march won’t Change Everything. It won’t change Congress and it won’t change the polarization gripping America. That, as I argued yesterday, we’re stuck with.