Just a week into his term, President Joe Biden is already under pressure to act more swiftly on climate change. On Monday night, Senate Majority Leader Chuck Schumer told MSNBC’s Rachel Maddow that the newly inaugurated president should declare climate change a “national emergency,” unlocking over a hundred additional presidential powers to tackle the overheating planet. “If there ever was an emergency, the climate crisis is one,” Schumer said.

The push for a “climate emergency” has been building for some time. In December, more than 380 environmental groups sent a letter to Biden’s transition team, urging him to issue an executive order invoking the National Emergencies Act. That same month, António Guterres, the secretary-general of the United Nations, encouraged every country in the world to adopt emergency resolutions until carbon dioxide is no longer building up in the atmosphere. And although Biden has frequently spoken about the “climate emergency” — and referred to it that way on the White House priorities list — he has stopped short of issuing a formal declaration.

The U.S. wouldn’t be the first country to declare a climate emergency. Today, at least 38 countries around the world — including the whole of the European Union, Japan, and New Zealand — and thousands of towns, cities, and counties have issued some kind of resolution declaring climate change a crisis. According to an estimate from the Climate Mobilization, a U.S.-based advocacy group, 950 million people, or 12 percent of the world’s population, currently live under a “climate emergency.”

Proponents argue that calling climate change an “emergency” could pressure governments to take sweeping and immediate action on global warming. Treating the crisis like a war or a pandemic, the thinking goes, would focus governments on a single objective — and, in the U.S., could even mobilize billions of dollars in funding. But even after dozens of national declarations, there’s limited consensus on what the term means, or whether it actually leads to cutting CO2 emissions. “It can be quite useful to have people declare emergencies,” said Tom Burke, the co-founder of E3G, a European climate change think tank. “The downside is it also allows people to declare an emergency and then not do anything.”

The concept of a “climate emergency” is part of a broader trend in activism, one that attempts to accelerate the normally sluggish timeline of action. It’s what drives Greta Thunberg, the teenage Swedish climate activist, to tell the world’s economists that “our house is on fire,” or pushes Representative Alexandria Ocasio-Cortez from New York to say that if humanity doesn’t address climate change by 2030, “the world is going to end.” Some environmentalists have watched the governments of the world stand around and do nothing for decades — and they’ve run out of patience. 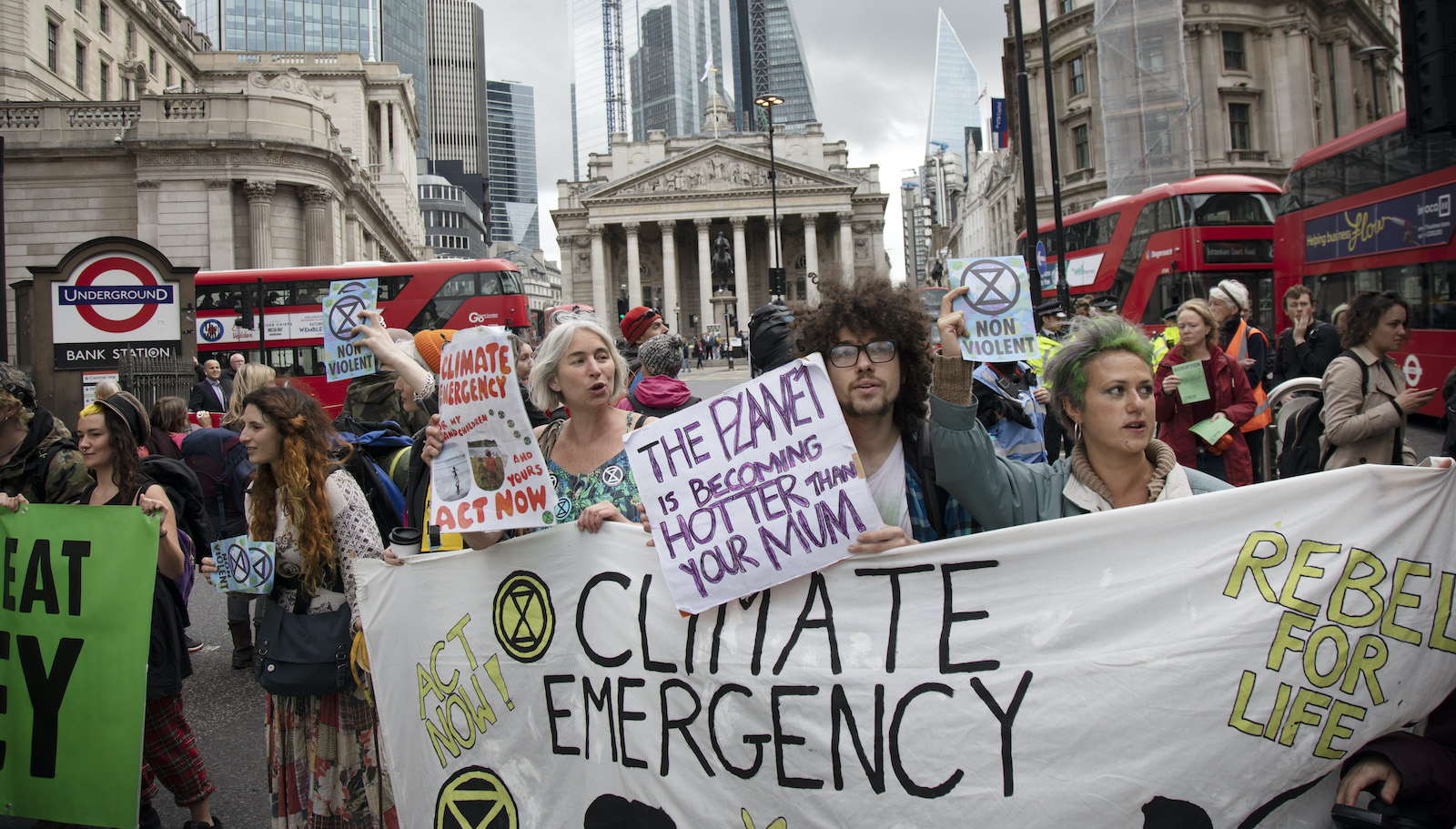 Protestors from the Extinction Rebellion called on the U.K. to declare a “climate emergency” in April 2019. Mike Kemp / Getty Images

“There’s this ongoing conversation within the climate community about how fast we need to move,” said Laura Berry, the research and policy director at the Climate Mobilization. “We see it as a way to shift how people conceptualize the climate crisis to an actual immediate emergency situation — something akin to a wildfire or an earthquake.”

The Climate Mobilization has been helping to organize an activist movement in the U.S. to push cities to declare climate emergencies of their own. To date, more than 100 cities and counties have done so, including San Francisco, New York City, and Boston. Berry says that the goal is to get local governments and members of the public committed to the idea that they can’t wait until 2050, or even 2030: Action needs to happen now.

For cities, declaring an emergency can be a gateway to addressing the climate problem; sometimes local governments pair the declaration with a promise to go carbon-neutral or to create special, global-warming focused task forces. But cities don’t have the technology or the money to decarbonize alone, and at the national level, the benefits of declaring an emergency are murkier.

Of the dozens of countries worldwide that have declared an emergency, only eight are on track to meet their commitments under the Paris Agreement. Sometimes, the cognitive dissonance between emergency rhetoric and actual policy is dizzying. In June of 2019, the day after Canada’s parliament declared a national climate emergency, Prime Minister Justin Trudeau approved an expansion of the Trans Mountain Pipeline that would triple the amount of crude oil transported from the Alberta tar sands to the West Coast and shipped around the world.

“There’s a potential for abuse” of the term, said Burke. “Both greenwashing abuse and political abuse.”

In the United States, however, declaring an emergency could be more than empty words. Unlike in most other countries — where emergencies have been invoked through largely symbolic parliamentary resolutions — U.S. law gives the president extra powers to use in a crisis. Under the National Emergencies Act, the president can simply proclaim an emergency and then tap into a suite of more than 100 additional powers. Such declarations aren’t uncommon, either: According to one count, presidents have declared 60 national emergencies since 1976. President Donald Trump famously used the act twice: once in an ill-fated attempt to get money to build a wall along the Mexican border in 2019, and again at the beginning of the coronavirus pandemic

“The specific powers are scattered through all these different laws,” said Dan Farber, a professor of law at the University of California, Berkeley. For climate change, “many of them are pretty irrelevant,” he said. “But there are some that could potentially be useful.” 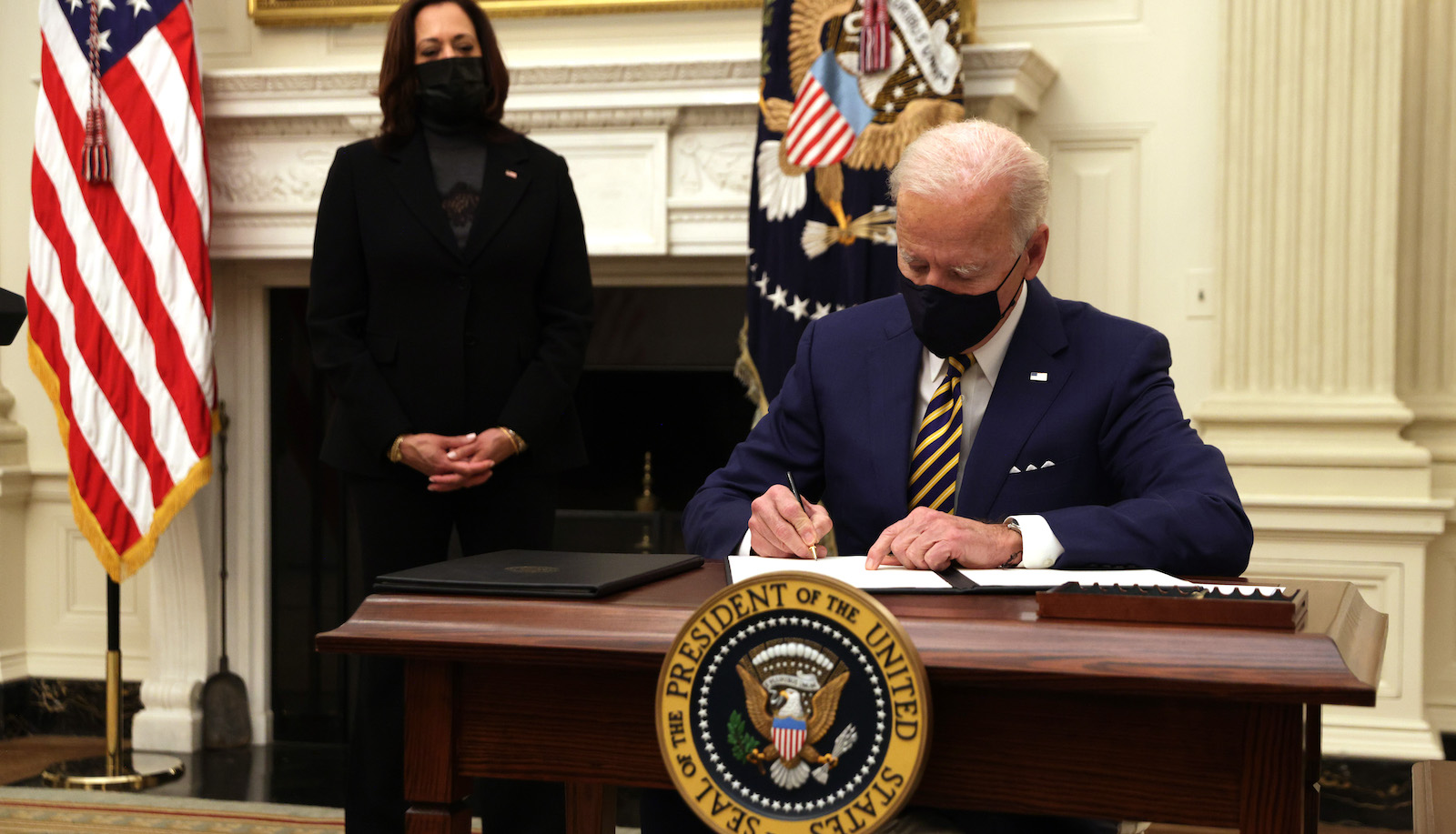 If Biden declared an emergency, he could theoretically redirect billions of dollars from the Pentagon toward construction of renewable energy (much as Trump tried to shift $3.6 billion from military construction projects to the border wall), impose sanctions against countries that overuse fossil fuels, like Russia or Saudi Arabia, or reinstitute a ban on U.S. exports of crude oil. He could also use the Stafford Act to send emergency aid packages to states, tribes, and local governments pummeled by climate-related weather events. But without the cooperation of Congress, which still sets the federal government’s budget, these actions would also come with significant limits — and maybe a backlash from the House and Senate. “The disadvantage would be that it could make it harder to do other things, by getting members of Congress riled up,” Farber said. And, he added, even these executive powers don’t add up giant action on climate change. “You’re not going to be able to say, ‘Oh, it’s a national emergency, we’re doing the Green New Deal.’”

Some also worry that emergency declarations could give governments a way to sidestep democracy. “They’re dangerous in a world where democratic norms are under challenge,” said Burke. Trump’s move to redirect funding toward his border wall was viewed as such a breach of normal politics that it resulted in open rebellion among fellow Republicans — and any truly significant use of emergency powers to fight climate change might fall into the same trap. Burke is concerned that, in the hands of the wrong government, the emergency framing could be used not to boost renewable energy or cut emissions, but to block immigrants fleeing climate-induced droughts and floods.

At the moment, however, many climate emergency declarations have a surprisingly democratic flavor. After the United Kingdom made its emergency announcement, the government also announced the creation of a “citizens’ assembly” on climate change, inviting over 100 people to advise the government on its response. The city of Oxford, England, has done the same.

Berry points out that just pushing local governments to make emergency declarations can get people engaged who wouldn’t otherwise have a foothold in politics. “Local governments tend to be the most accessible form of government,” she said. An older woman living in a small town in Maine, for instance, might not be able to push the president or Congress to pass laws limiting greenhouse gas emissions, but she could show up at a city council meeting and urge the members to declare a climate emergency, face-to-face.

Most calls for an emergency aren’t intended to create lasting policy; instead, they’re a way of building momentum for larger action. And even if they seem purely symbolic in the short term, activists can use them as ammunition in the long term. After Canada’s pipeline controversy, organizers fought back, using the Trudeau government’s own emergency declaration against it. (The pipeline, for now, is still under construction.) “What you have is a situation where activists are actually able to leverage those public statements made by political officials,” Berry said.

Burke, who is generally skeptical of declaring climate change an ‘emergency’, says that there is no doubt that the term has reshaped the conversation around climate change. “Declaring emergencies as a piece of symbolism has been quite important,” he said. “And anybody who doesn’t understand the importance of symbols in politics hasn’t been paying attention to Mr. Trump.”