Billie Eilish’s 'my future' isn’t ironic, and that’s the point 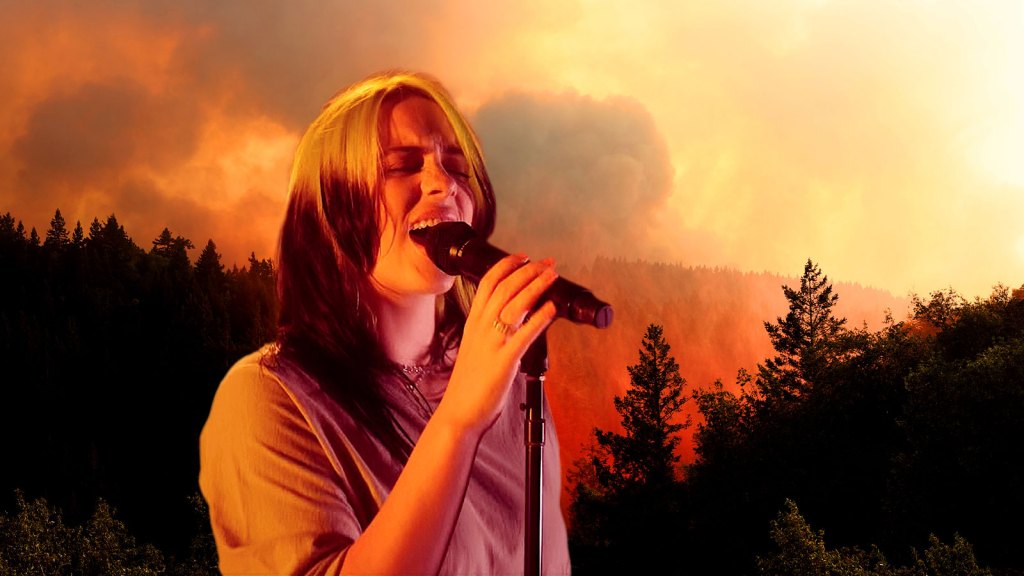 Billie Eilish’s ‘my future’ isn’t ironic, and that’s the point

I wouldn’t want to be a teenager again even for a billion dollars. Enduring that stage of life is enough of a trial under standard circumstances, but experiencing it in the current era seems like it would be truly unbearable. Having to figure out how you fit into the world as a constantly changing entity against the backdrop of COVID, climate change, and the last crumbling remnants of American democracy? I can almost hear the pens on the Lorazepam prescriptions!

You would hardly expect 18-year-old pop star Billie Eilish, a particularly laconic figurehead of Gen Z, to pop out with wide-eyed optimism. And yet! She has taken this particularly bleak moment to shed some of the goth-y ennui of her repertoire and reveal a bizarre little optimistic heart with her new COVID-era single, “my future.”

Eilish, best known for moody-yet-boppy hits like “bad guy” and “ocean eyes,” has ventured into the challenging realm of “Top 40 songs about climate change” before. Last September, my much-closer-to-teenage colleague Miyo McGinn wrote about Eilish’s climate predilections after the release of the very dark track “all good girls go to hell.” In the video, Eilish appears as an angel who grows wings via some violent injections (hate it), plummets to Earth, lands in a tar pit, and then drags her body out to wander the fiery streets of Los Angeles. It’s a song about a world destroyed, one that’s guaranteed to go from bad to worse.

That message is quite a contrast with “my future,” which she performed at last week’s Democratic National Convention immediately following her endorsement of Joe Biden. (Because “we need leaders who will solve problems like climate change and COVID, not deny them,” in her words.) The chorus repeats the line, “I’m in love with my future / Can’t wait to meet her” — a notable turnaround from “all good girls” refrain: “My god is gonna owe me / There’s nothing left to save now.”

Eilish’s lyrics echo the message from many of the (primarily female) Gen-Z climate activists who rose to prominence over the course of the past year, namely some variation on: “you, older generations, have stolen my future by refusing to do anything about climate change and now I’m stuck in your mess before I’m even old enough to vote.” Yet Eilish has said that there is nothing ironic about “my future” — it’s a genuine expression of optimism for her older, wiser, more self-assured self.

There’s something inherently kind of heartbreaking about that, of course; naturally a teenager can’t wait to get older, to be more confident and in charge of herself. That’s literally the foundational plot point of the classic romcom 13 Going On 30, to reference one of my own generation’s cultural touchpoints; anyone would want to fast forward through adolescence as quickly as possible! And yet for the currently-under-20 generation, it’s got to be such a heartbreak to contrast that eagerness with their sober evaluation of the world’s present trajectory.

I, who crossed the threshold from sullen teen to depressed-but-legal adult during the peak of ironic hipster culture, could not have imagined a heartfelt, wide-eyed sentiment like “my future” gaining anything but ridicule in, say, 2007. But even the most seemingly entrenched cultural aesthetic can turn on a dime. In 2012, Princeton professor Christy Walpole wrote what would be deemed a “takedown of irony” that echoes rather portentously today:

“The ironic life is certainly a provisional answer to the problems of too much comfort, too much history and too many choices, but it is my firm conviction that this mode of living is not viable and conceals within it many social and political risks … [T]his choice equals a surrender to commercial and political entities more than happy to act as parents for a self-infantilizing citizenry.”

My tired generation did little to defy that characterization by infamously failing to turn out for the 2014 midterm electionsthat ended up saddling us with a Congress that’s been stripping environmental protections and derailing climate legislation ever since. Now, the idea of “too much comfort” and “too many choices” is an almost laughable, unimaginable luxury as every day of this hellish summer brings thousands of additional COVID deaths, historic wildfires, and double doses of hurricane threats.

At the risk of sounding like Hannah Horvath, I do think that my generation is weary of the whole everything-is-subject-to-ridicule thing; it’s such an affected stance, and who has time for that kind of pretense these days? I don’t know whether irony died or simply became irrelevant in the face of genuine global disaster — and it might be perfectly encapsulated in a neon-rooted pop star imploring her peers to “vote as if our lives depended on it.”