It’s been a helluva year — so rather than just reflecting on all that went down in 2020, we’re going back a bit further and seeking comfort via nostalgia. But while revisiting “simpler times” may feel like temporary escapes from current disasters like climate change, a pandemic, and attempted coups, they also remind us of how we got here. Welcome to Grist’s Nostalgia Week.

When I was 9 years old, a reporter from Good Morning America visited Leavenworth, Washington, and declared it “the ultimate Christmas town.” It was 2007, and he was doing a spot on my hometown’s most popular winter event, the Christmas Lighting Festival, where thousands of people crowd around the Front Street gazebo to watch half a million red-and-green Christmas lights simultaneously turn on. Due to the East Coast time difference, he shot it live at 4 a.m. local time. Hundreds of people showed up anyway, many in costume and carrying signs, hoping to make it onto the program.

TUESDAY
Everything I learned from ‘The O.C.’ in 2020
You can never truly go “home” again — not even in reruns.

The postcard version of Leavenworth, Washington, is a winter wonderland — “one of the most Christmasy places in America,” according to the city’s official website. The charming town, home to 2,000 people, is filled with wooden balconies and A-line roofs with dark paneling, reflecting the architecture of an Old-World, alpine Bavarian village. We have year-round Christmas shops, a reindeer farm, and horse-drawn sleigh rides through what’s sold as “white and drifted snow.” According to the tourism board — which doesn’t hold back, when it comes to schmaltz — December weekends “end like a Dr. Seuss tale,” when the local “townsfolk” participate in the lighting festival, joining hands for some good old-fashioned Christmas caroling.

WEDNESDAY
Is climate change coming for the Christmas rom-com?
In this year’s festive romances, you can count on two things: true love and tons of snow.
By Shannon Osaka 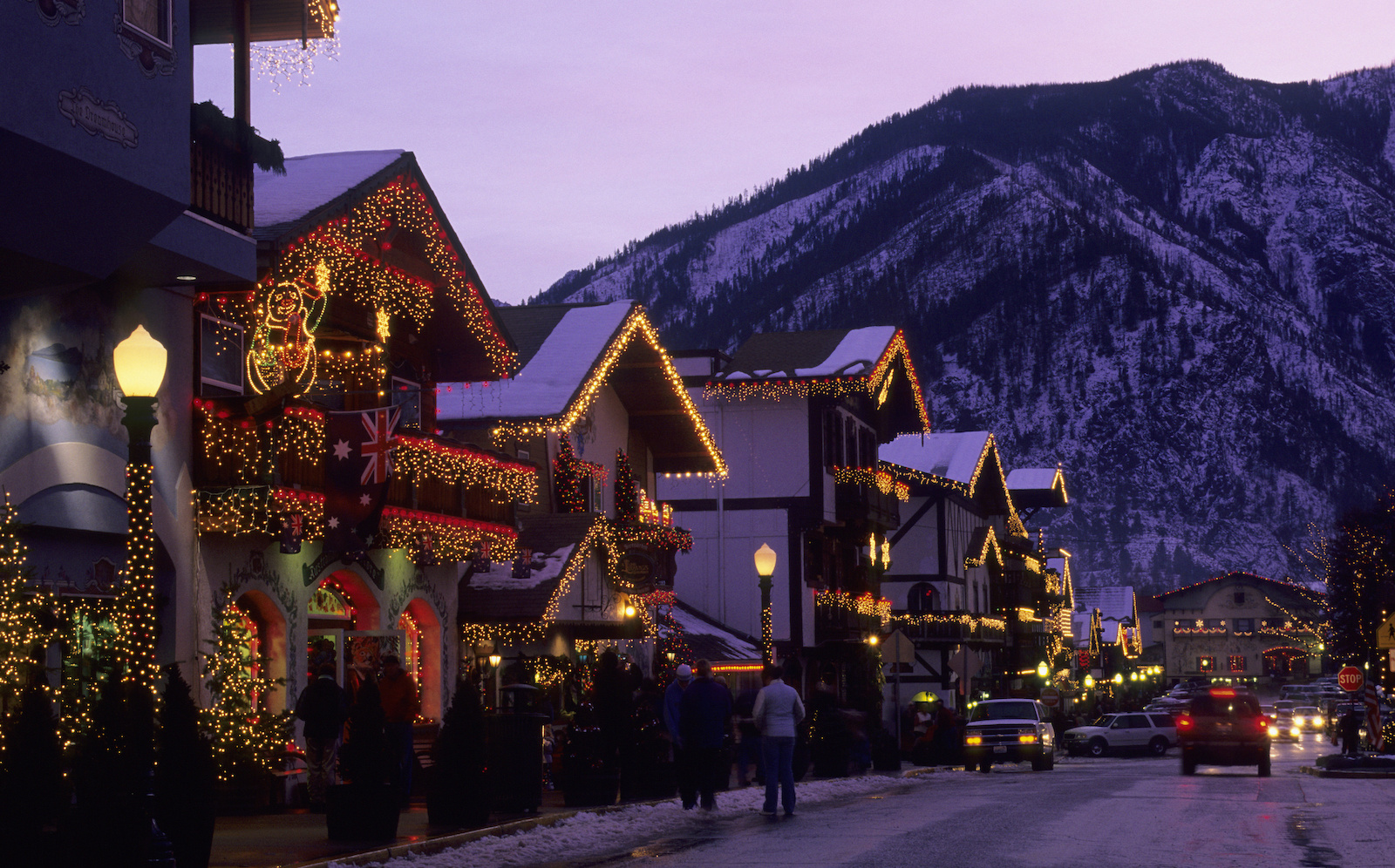 THURSDAY
Ask Umbra: Why do I love the mall when I hate consumerism?
You don’t have to change what comforts you; but you can control how you react to it.
By Eve Andrews

But the snow-blanketed, postcard-ready version of Leavenworth is in flux. According to the U.S. Global Change Research Program’s Fourth National Climate Assessment, winter is retreating across the Pacific Northwest — and it’s expected to recede even further in the coming decades. Thanks to climate change, towns like Leavenworth are slated to experience warmer temperatures and more rain. Notably, the snow season could shorten by a full month by the time I’m 50.

FRIDAY
For your consideration: Fruitcake
A callback to a pre-modern era, an exercise in delayed gratification, and lots of brandy.
By L.V. Anderson

In Leavenworth, we are already getting a glimpse into that future — and so far, the effects of global heating aren’t exactly amplifying our “Old-World Christmas spirit.” December feels rainier. There’s sleet in January. By February, slush replaces snow on the streets downtown.Of course, there are still some years when we get a lot of snow — but overall trends don’t seem promising for our winter wonderland. As climate change chips away at Leavenworth’s winters and brings the possibility of a season without “white and drifted snow” ever closer, the town is facing an identitycrisis.

The first time I remember seeing the city bring in snow machines was in 2011. I was 12 years old, and a team of filmmakers wanted to shoot a low-budget independent movie, Ira Finkelstein’s Christmas. (Its name was later changed to Switchmas, which is only slightly less cringey.) The storyline follows a Jewish tween from California, Ira, who desperately wanted to experience a Hallmark Christmas —one with Santa Claus, Christmas carols, and, of course, snow.

Vegetarianism used to be lonely. Now, it’s a family affair.
The early 1990s were a different era for “plant-based” eating.
By Teresa Chin

In the movie, Ira gets his way by swapping places with his doppelgänger in an airport. Ira goes to Leavenworth, while his lookalike visits Ira’s grandparents in Florida. I was slated to be an extra in the film, sledding down a hill on Front Street as a nameless resident of Leavenworth, or, as the movie rebranded us: Christmastown, USA.

As a stand-in for Christmastown, Leavenworth was an obvious choice except for one problem: When the film crew scouted the area, the ground was “brown and muddy.” That year hadn’t been great for snow, and it was late in the season — thus, the Mission Ridge snow machine had to be called in. If it hadn’t been for a belated Christmas miracle — a truly anomalous two-week-long stretch of late-season snow days that coincided with the film shoot — Ira Finkelstein’s magical Christmas would have been entirely human-made. 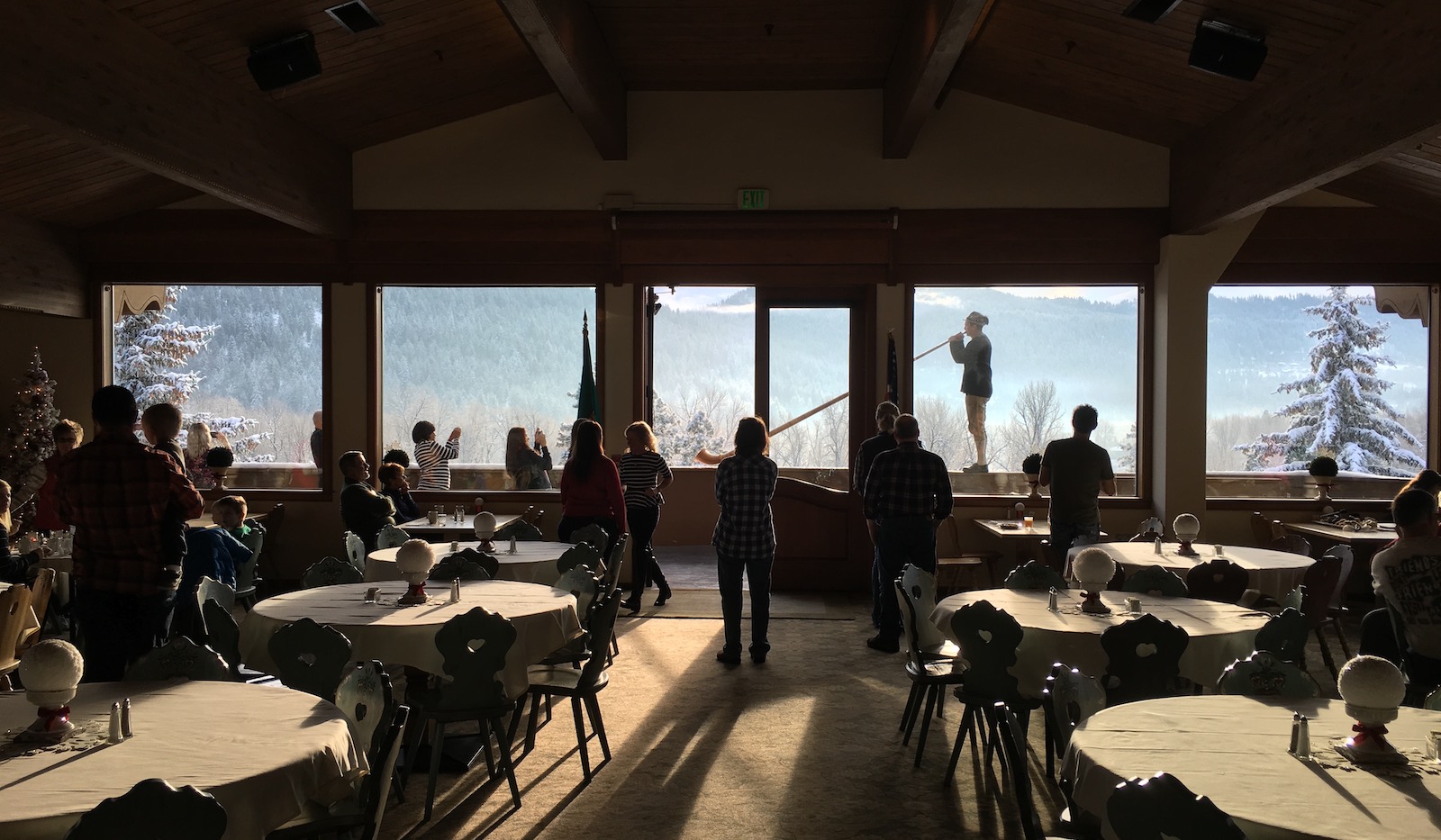 A man plays the alpenhorn — a wooden instrument common in Bavaria — at a Leavenworth hotel. Joseph Winters

Since that strange film, I’ve seen a lot more of those snow-making machines in Leavenworth — “snow guns,” as they’re officially called.Even when we aren’t using the city center to film cheesy Christmas movies, there’s a need to keep up wintry appearances, or at least, try to. In some cases, the snow guns can’t keep up with snow loss, especially in high-traffic areas like Leavenworth’s iconic Front Street sledding hill — the same place where I made my one-second Hollywood debut for Switchmas.

The hill has become an iconic downtown disaster zone, although it doesn’t start the winter that way. For a few days each December, it’s covered in powdery white snow, making it a sledding favorite for tourists visiting from Seattle. Growing up, my sister and I used to envy their impressive assortment of sleds —round ones, rectangular ones, plastic ones, foam ones.

But within days of the first flurries, overzealous sledders smush the snow down flat, and it mixes with the dirt underneath. The result is a black-and-brown slurry that colors the hill for weeks. It freezes and thaws until nighttime temperatures start to climb above freezing. But still, the kids come.

Snow holds more than symbolic significance to the people of Leavenworth; it helps support an entire tourism industry. Within a 10-minute radius of downtown, the city has three cross-country ski areas and a small alpine run, as well as two snowshoeing courses. The Leavenworth Winter Sports Club maintains much of this infrastructure, “grooming” the trails every night during peak season and holding races with Scandinavian-sounding names like the “Skirennen.”

When I was in middle school, I joined the Sports Club’s cross-country ski team. For some of my friends, ski team was their world — after weeks of practicing on Leavenworth’s trails, they’d take off for weekend races in Winthrop, Washington, or Bend, Oregon. Even after spring had come and the snow had all melted into the Wenatchee River, they would bust out roller skis, practicing on the pavement in anticipation of “Junior Nationals,” an end-of-the-season race in Wyoming, Vermont, or some other exotic and snowy destination. As I neared the end of high school, it seemed like they were spending more and more time on roller skis. 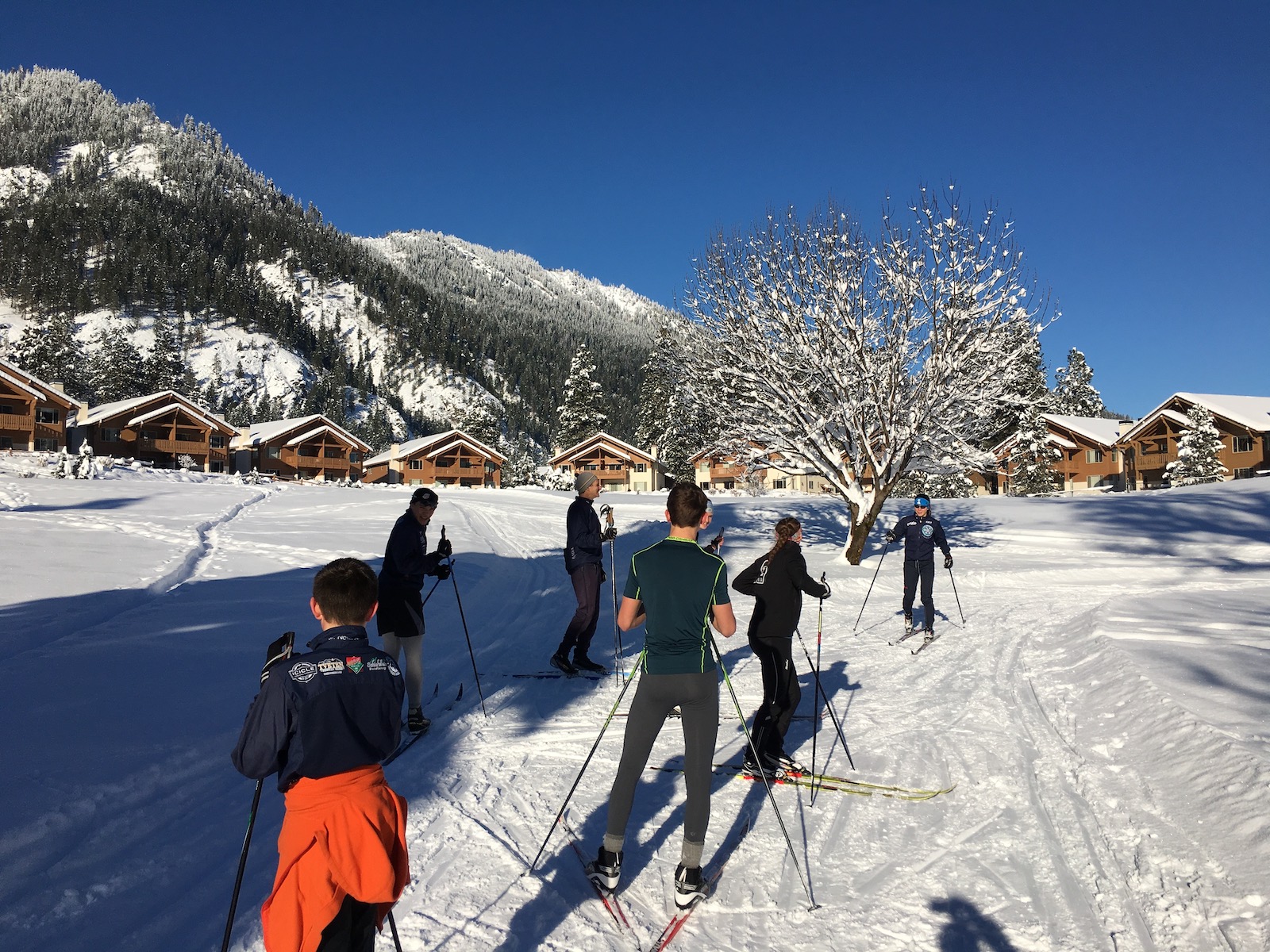 When I come back to Leavenworth now, on break from college, my friends and I often have to use “rock skis” — secondhand, inexpensive pairs of skis that you don’t mind scuffing on rocks, pine cones, and exposed branches lying beneath the thinning snow’s surface. Some years, the ski season doesn’t even begin until late January, when I’m about to fly back to school for the spring semester.

For people who work in the ski tourism industry, the lack of snow can be devastating. In the early 2000s, each low-snow year in the Northwest was associated with annual economic losses of $173 million and 2,100 fewer jobs, compared to high-snow years. And with climate change, things will only go downhill, with scientists already forecasting the demise of some of Washington’s most popular ski resorts by 2050. Some areas have been forced to purchase snow machines for the first time ever.

The winter of 2014-15 provided an alarming sneak preview, when the Northwest’s temperatures shot 6.2 degrees F above the 1970-99 average. Precipitation was down too — the first half of the year was the seventh driest ever recorded. Stevens Pass, a popular ski resort within driving distance of Leavenworth, got only 40 percent of its usual amount of snow, and made 43 percent less money than during the previous season.

I remember that time. It was my junior year of high school, and people were calling it our year without a winter. I also remember that it was the same year Kentucky Senator James Inhofe infamously brought a snowball onto the Senate floor, “disproving” climate change once and for all. “It’s very, very cold out,” he said before tossing the snowball. “Very unseasonal.”

Leavenworth has begun to remind me of a fast food ad —the food you get never looks quite as beautiful as the promo. In Time Magazine, we’re one of the top 10 places with the most holiday cheer. On HGTV, we’re an “exquisite Christmas town.” Our own promo materials claim that “Leavenworth in winter is just like living in a snowglobe,” before suggesting eight distinctly snow-dependent activities for visitors to do during a six-day “week of winter fun.”

Living in Leavenworth, you see the less-shiny reality firsthand. In 2020, I’ve spent more time here than in any year since before college. Other than a brief stint in a Seattle sublet and a couple of weeks in Portland, Oregon, I’ve been living with my parents on the outskirts of town since my university sent its students home in March. Right now, people are understandably focused on COVID-19, which has caused business closures and canceled all of our winter events. In a normal year, 25,000 visitors might pack into Leavenworth’s downtown plaza every weekend to watch the Christmas Lighting Festival. This year, no one will.

In both crises — COVID-19 and climate change — the urge to go on as normal can be overwhelming. Tourists continue to visit Leavenworth during lockdown, shivering on restaurant patios in cold, wet weather because of the restrictions on indoor dining. Many of Leavenworth’s downtown shops now sell Christmas face masks.

It’s a similar story with climate change. Folks visiting Leavenworth from Seattle expect a winter snowglobe. Driving over the pass, checking into hotel rooms, bundling up the kids, and purchasing newfangled sleds — it’s a ritual that had better end with a goddamn snowman, or at least a snowball or two. So as the winter hobbles on, when it’s January, it’s lightly raining, and the sledding hill is streaked with brown, bright-eyed kids will innocently put sleds to dirt, as if sheer willpower could change the painful reality: Christmastown isn’t what it used to be.

For your consideration: Fruitcake