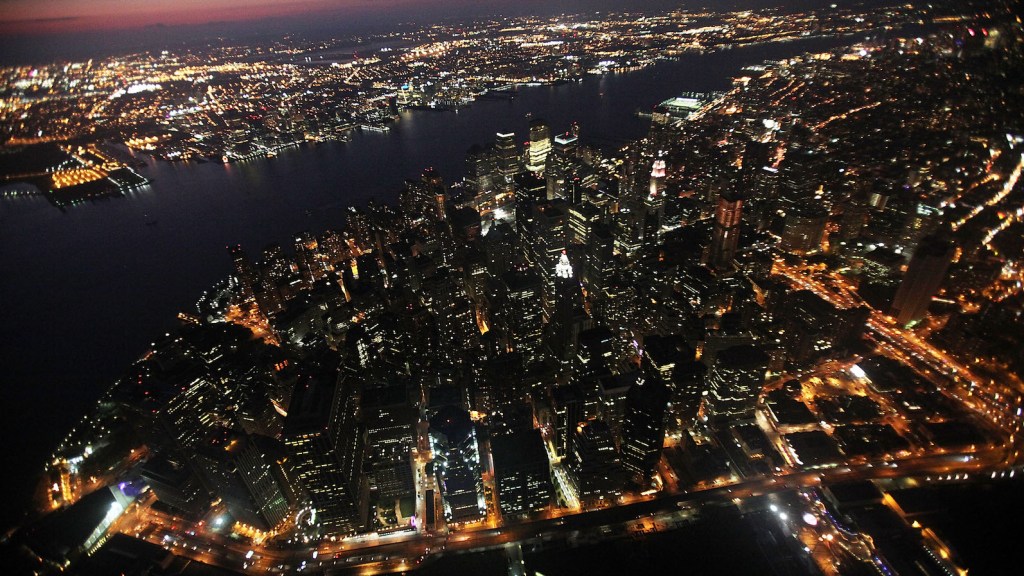 That fence is about to become a battle line in the fight over the city’s energy future.

One of the companies on the complex, NRG Energy, has quietly revived plans to replace its 50-year-old oil-burning generators with new gas-fired units, part of a $1.5 billion makeover the utility giant says will allow it to comply with state pollution rules while meeting electricity demand.

But the new cadre of climate-change hard-liners who unseated incumbents in this summer’s primary wants to upend that. The group of more than half a dozen campaigned for the New York State Legislature on platforms that included shutting down fossil fuel generation and bringing private utilities under government control.

“This is what it means to live out your belief in the Green New Deal,” said Zohran Mamdani as he squinted through the fence on a sunny recent Saturday morning. The 28-year-old democratic socialist unseated 10-year incumbent Assemblywoman Aravella Simotas in the Democratic primary for the 36th Assembly District last month.

New York City’s roughly 15 “peaker” plants — which produce extra generating capacity when the city’s demand eclipses the regular supply, like during a heatwave — are aging, and they run primarily on oil and gas. As the city looks to shrink its output of planet-heating gases, the plants seem like low-hanging fruit.

The peakers are used infrequently but are expensive. The stations run for an average of 6 percent of the year, or about 500 hours, the clean-energy research group Strategen Consulting estimated. The city paid the plants’ owners $4.5 billion from 2010 to 2019 just to keep the units on standby, according to another analysis, from the newly formed PEAK Coalition, an alliance of five clean-energy and environmental justice groups. The vast majority — $3.9 billion — went to three out-of-state companies: Houston-based NRG, the Boston-based private equity fund ArcLight Capital and New Jersey-based private equity firm LS Power Group.

Some of the peaker plants are more than 50 years old. State regulators estimate the older combustion turbines emit at least 30 times more nitrogen oxide, a smog-causing gas that causes respiratory problems, than do new units.

Air quality concerns are particularly acute in western Queens. The area, belted with highways and rimmed by power plants, already suffers higher rates of tiny but dangerous air pollution particles, known as particulate matter 2.5, that lodge in soft lung tissue and trigger asthma and cancer. The blocks that slope down toward the utility complex in Astoria have long been known as “Asthma Alley.”

The primary election added new political star power to that fight. State Senate nominee Jabari Brisport and Assembly hopeful Marcela Mitaynes — two democratic socialists and activists whose districts overlap with a separate project in Brooklyn’s Gowanus neighborhood — won stunning upsets, securing the Democratic slot on ballots that haven’t gone for Republicans in generations. Both candidates recently joined a rally outside the Gowanus plant to demand a stop to the gas repowering.

“We shouldn’t be building any new fossil fuel infrastructure,” Brisport said by phone. “The fact that these peakers are trying to expand their footprint just flies in the face of our attempts to decarbonize our economy.”

Brisport and other opponents say building new gas units guarantees their use for decades to come, making it harder and more expensive to end the city’s dependence on fossil fuels.

But renewables like wind and solar aren’t viable on their own. The sun doesn’t always shine, and wind is intermittent. And the city has limited space to build out the number of solar panels and turbines that would be needed to match the generating capacity of a fuel-burning peaker. That is what makes battery storage appealing. Last October, the state utility regulator approved construction of a 316-megawatt battery at the LS Power-owned Ravenswood Generating Station in Long Island City, the Queens neighborhood just south of Astoria. Once completed, the unit will be the largest utility battery in the state, and the first major foray into energy storage in the Northeast.

New York is aiming to build 1,500 megawatts of battery storage by 2025 as part of its efforts to adhere to a major new climate law passed last year. The legislation, known as the Climate Leadership and Community Protection Act, or CLCPA, mandated that New York generate 100 percent of its electricity from carbon-free sources by 2040. Meanwhile, battery technologies “have been proven and prices have come down,” said Dennis Wamsted, an analyst at the Institute for Energy Economics and Financial Analysis.

“You could make a very good argument that we should be replacing the oil-fired peakers and most of the gas ones with storage,” Wamsted said by phone. “It is totally within the realm of possibility to make it happen.”

But the law doesn’t bar new fossil fuel construction outright and remains open-ended about how to reach its targets. The New York Independent System Operator, the nonprofit that manages the state’s electrical grid, warned last year that a system devoid of fossil fuels is significantly more fragile. When a single fossil fuel plant goes down, its outage generally doesn’t impair the ability of other plants to burn fuels and produce electricity.

“On the contrary, individual wind and solar generators may be simultaneously affected by regional weather conditions, such as extended periods of low wind,” NYISO concluded in its 2020 Power Trends report.

Storage resources, meanwhile, “are currently limited in their ability to supply the grid for such durations on a daily basis due, in part, to the time needed for recharging,” it said.

“To ensure reliability, you need to have some kind of system that will turn on very quickly to meet those peak load hours in case the wind dies or clouds reduce the amount of solar output,” Casey Kopp, a regional power market analyst at the energy research firm Wood Mackenzie, said by phone. “Storage is such a new product that it’s hard to understand whether it can really serve that peaking capability.”

A growing body of research projects how the country could rapidly transition off fossil-fueled electricity production. One recent study from the group Rewiring America found that the United States could generate virtually all its electricity from wind, solar and nuclear by 2035 and keep global warming within the range the Paris Agreement hoped to set, even without drastically altering other facets of American life.

But that assumes a grand federal program on the scale of the World War II-era New Deal — something even a rich state like New York could not do on its own.

One solution would be to bring more renewables generated outside the city limits onto the grid, which is divided in the state. The upstate region generates 88 percent of its power from zero-emissions sources, primarily hydroelectric dams and nuclear reactors, according to NYISO data. Downstate in the city, Hudson Valley and Long Island, that figure is just 29 percent. And that percentage could decrease even more next year, when the Indian Point nuclear power plant shuts down.

Laying new transmission lines from the sparsely populated upstate region to the metropolitan downstate could balance out the problem and make the city less reliant on fossil fuels. But building transmission lines, like fossil fuel pipelines, is costly and difficult, as the projects cross multiple jurisdictions and offer property owners ample recourse to block construction.

Developers first pitched the Champlain Hudson Power Express, once described as “essentially a 333-mile extension cord down the Hudson River from Quebec to New York City,” in 2008. In 2020, a year before it was scheduled to come online, the proposal remains the subject of heated debate. Last November, Riverkeeper, a state environmental group, withdrew its support for the project. In June, the Sierra Club called for more reviews of the proposal.

Offshore wind turbines offer what some see as an easier route, since transmission lines would run under open waters. Last year, the state granted contracts to build two massive wind farms off Long Island, set to generate a combined 1,700 megawatts of electricity. The projects have vast potential to both transform the industrial waterfront in Brooklyn and Queens with thousands of wind service and maintenance jobs and to provide much of the city’s electricity needs. But the turbines aren’t expected to come online until 2024, and that assumes none of the hiccups and delays that notoriously dog infrastructure projects in the Empire State.

Peaker plant owners, meanwhile, are up against a deadline. New state regulations on nitrogen oxide emissions come into force in May 2023. The rules would require older, oil-fired units to shut down or obtain a waiver to continue operating.

“We need to reach the (CLCPA) goals, but we also need to keep the lights and air conditioning on as we work to get there,” said John Reese, the senior vice president of Astoria Generating Co., the ArcLight-owned firm that runs the peaker plant in Gowanus. “Electric reliability is critical — as everyone who lost power during the recent storm can attest to — and building new infrastructure in New York is difficult, expensive, and time-consuming.”

On its website, NRG said the repowering in Astoria would lower peak emissions by “up to 99 percent per hour” and “use technology that can be fully converted to zero-carbon fuel in the future.” That could mean the company plans to eventually run the gas turbines on hydrogen, a cleaner fuel that is increasingly popular in Europe but that the federal Department of Energy describes as “still in its infancy.”

In a letter urging state regulators to halt the project, four groups — 350.org Brooklyn, New York Communities for Change, Food & Water Watch, and the New York City chapter of the Democratic Socialists of America — accused NRG of promoting the potential of hydrogen “in an attempt to obfuscate” the near-term plans.

The groups asked the state Department of Environmental Conservation to submit the project to review under a provision of a 2011 law requiring power plants to study pollution effects and hold public hearings on repowering proposals.

But NRG received its initial approval for the project before that law was in place. At the time, there was strong support for the repowering project. Last year, the state Department of Public Service ruled that the project did not require additional review.

It’s unclear how much legal leverage Mamdani, Brisport, and others would have in the state Legislature. But they’re already considering potential approaches. Mamdani and Brisport said they’d consider bills to prohibit new fossil fuel infrastructure in the state. Both also support the Democratic Socialists of America’s campaign to bring New York City’s electric utility, Consolidated Edison, and gas provider, National Grid, under government control, a process that would likely mean buying out the local infrastructure.

Unlike other democratic socialists who unseated dynastic Assembly legislators entrenched in outer-borough political machines, Mamdani defeated Simotas, a telegenic 41-year-old with a liberal voting record. It marked perhaps the first major example of a democratic socialist triumphing over a mainline progressive — and, in his view, showed voters’ appetite for dramatic change.

“When you dig yourself into a hole, you just stop digging,” he said. “Yet what these people are saying is ‘dig slower.’”