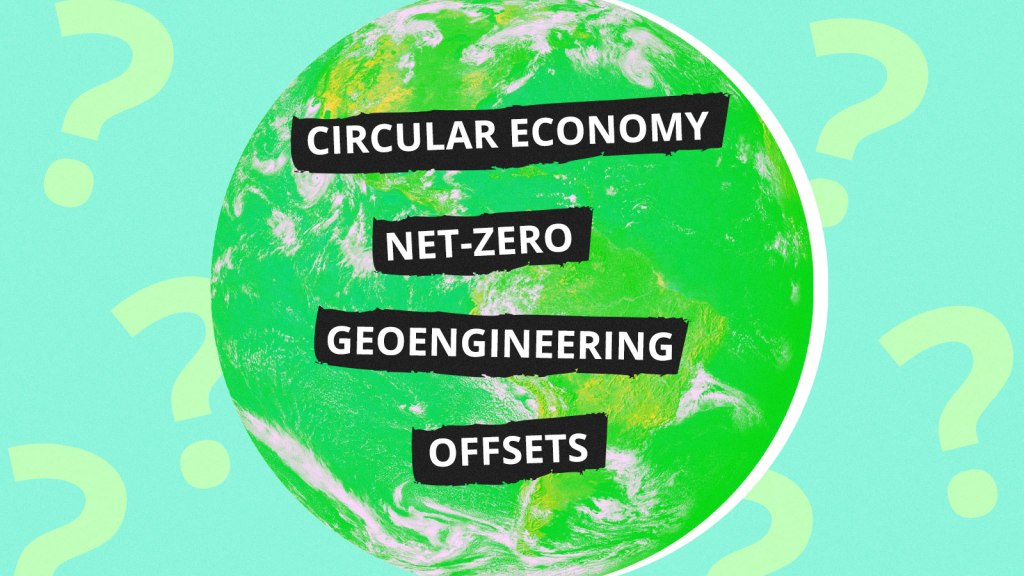 Grist
A TERM FOR THE WORSE

If you’re confused what the “circular economy” is, or what it means for a company to go “net-zero,” you’re far from alone. There’s a big mismatch between what scientists, journalists, and activists are saying and what the public understands. This is hardly a new problem, but it’s yet another obstacle to getting people to care about climate change: Obscure words in articles about rising sea levels and supercharged weather could discourage people from wanting to learn more about a planetary crisis.

The solution is to put jargon and buzzwords into simple language that anyone can understand. It takes some effort, of course. A good example is “Up Goer Five,” a diagram by Randall Monroe, the cartoonist behind the website xkcd. It explains how a rocket works using only the 1,000 most common words in the English language. Simplifying lingo related to climate change requires a similar process. Take a cold, clinical word like “biodiversity” and turn it into the more evocative “wildlife.” A real head-scratcher like “climate mitigation” becomes “reducing emissions.”

Forget “dumbing down.” Using more common language is “smartening up,” said Susan Joy Hassol, director of the nonprofit science outreach group Climate Communication in North Carolina, who coaches scientists and journalists to write and speak more conversationally. “The only thing that’s dumb,” Hassol said, “is speaking to people in language that they don’t understand.”

Jargon is good way to kill someone’s interest in a particular topic, according to research published this month in PLOS ONE, a science and medicine journal. Readers take it as a sign that the material isn’t for them. For the study at Ohio State University, 650 people read paragraphs about self-driving cars, surgical robots, and 3D bioprinting online. Half of them read paragraphs filled with cringe-worthy phrases (like “AI integration”), while the other half read phrases translated into plain English (make that “programming”). After they were finished, those subjected to obscure words said they felt less interested in science — even when those words were defined.

When something is easy to read, people find they want to learn more about the subject, said Hillary Shulman, lead author of the study and an assistant professor of communication at Ohio State. Her research has shown that people are more receptive to information written in plain old print instead of cursive, just because it’s easier to process. Avoiding jargon matters, she said, for anyone who wants to get their message to a broad audience.

“If you limit your work to the people who really work hard to read it, you’re probably missing out on the audience you actually need to be reading the work,” Shulman said. “You don’t need the people who are already bought in.”

Jargon doesn’t just leave people feeling disengaged — it can also fuel a head-in-the-sand response, according to one of Shulman’s previous studies. Encountering new things often feels difficult and risky, she said, and many people naturally respond by coming up with counterarguments.

Research shows that the best way to communicate about science might just be … to talk like a normal human being. One study published last week found that when scientists showed their human side and told personal stories, their audience was more receptive to what they were saying. Linguistics has shown something similar: You were probably taught to cut all filler words like uh, um, and like, but they can serve an important role in communication, helping listeners process complex information. And despite common wisdom that baby-talk is useless — just talk to them like adults, am I right? — recent studies suggest that over-enunciating words and using a sing-song voice actually helps babies acquire language. Good communication isn’t necessarily about sounding smart.

So how could scientists and journalists talk more like the average person? Hassol has assembled a list of about 150 terms that mean one thing to scientists and another to the general public. To most people, “positive feedback” means praise, but when scientists say the same phrase, they’re talking about a vicious cycle. Similarly, “aerosols” are not just cans of hair spray and sunscreen, but also tiny particles in the atmosphere.

Scientists use all this specialized terminology because for them, it’s efficient — one word gets across a complex concept. But then scientists pass these same esoteric words on to journalists, who then turn them on an unsuspecting public. And it’s not just academics complicating the climate lexicon: Politicians, companies, and activists use buzzwords that most people don’t understand, too.

I begged people on Twitter to tell me what words tripped them up the most while reading climate change articles, then asked Hassol to help me break down some of the most insidious terms. Here’s a short list of the jargon and buzzwords that came up, along with some plain-English translations to help make sense of them.

As they get picked up by companies and politicians, slippery buzzwords like “sustainability” and “resilience” are starting to lose their meaning. Deploying them now might even backfire. During testimony in the Senate last year, Frank Luntz — a messaging strategist who advises Republicans and advocates for climate action — said that “sustainability” rings of the “status quo.” He explained: “What American people really want is something that is cleaner, safer, healthier. What they’re asking for is improvement, not the status quo.”

Acronyms also get in the way of making sense. A recent study in the Proceedings of the National Academies of Sciences considered how to transform society to take action on climate change. In the paper, scientists coined the phrase “social tipping interventions,” which they went on to call STIs. That means something, uh, totally different to the rest of the population.

Hassol, who was the senior science writer on three U.S. National Climate Assessments, remembers one instance in which some scientists wanted to abbreviate the spruce bark beetle that’s destroying forests across the American West as “SBB.” Hassol thought that was nuts. Why not just use its full name once, she suggested, and then refer to it as “the beetle” after that? She also thinks it’s better to call the Arctic National Wildlife Refuge in Alaska, where oil companies have been angling to drill for decades, by its full name — not ANWR, pronounced an-whar. The acronym doesn’t exactly make caribou or indigenous culture spring to mind.

“When you put an acronym on something, it loses its power,” Hassol said.