When I gave up my car nearly four years ago, I anticipated it would come with certain challenges: hauling groceries by hand, navigating bus transfers, squeezing into crowded subway cars. But one I did not anticipate was not being able to get tested for a highly contagious virus that had covered the world in a pandemic — I mean, I wasn’t really anticipating that scenario at all in the summer of 2016, but here we are.

And when I did get sick — a swift collapse into unbearable body aches and violently protruding lymph nodes — I sort of refused to consider the possibility that it could be COVID-19. But a text message (!) from the sole person I had spent any time with in the last couple of months upended my denial — I had been exposed.

I had read the news and knew that tests are precious and limited, so I was assuming that I’d never get a diagnosis more satisfying than “eh, probably.” As someone who is young and generally healthy, I knew my lesser vulnerability might not merit a test. So I called my doctor’s office describing my situation and asking for advice, and received an email a few hours later:

For various reasons, they said I didn’t qualify; but the strangest one mentioned was that I didn’t have access to a vehicle. 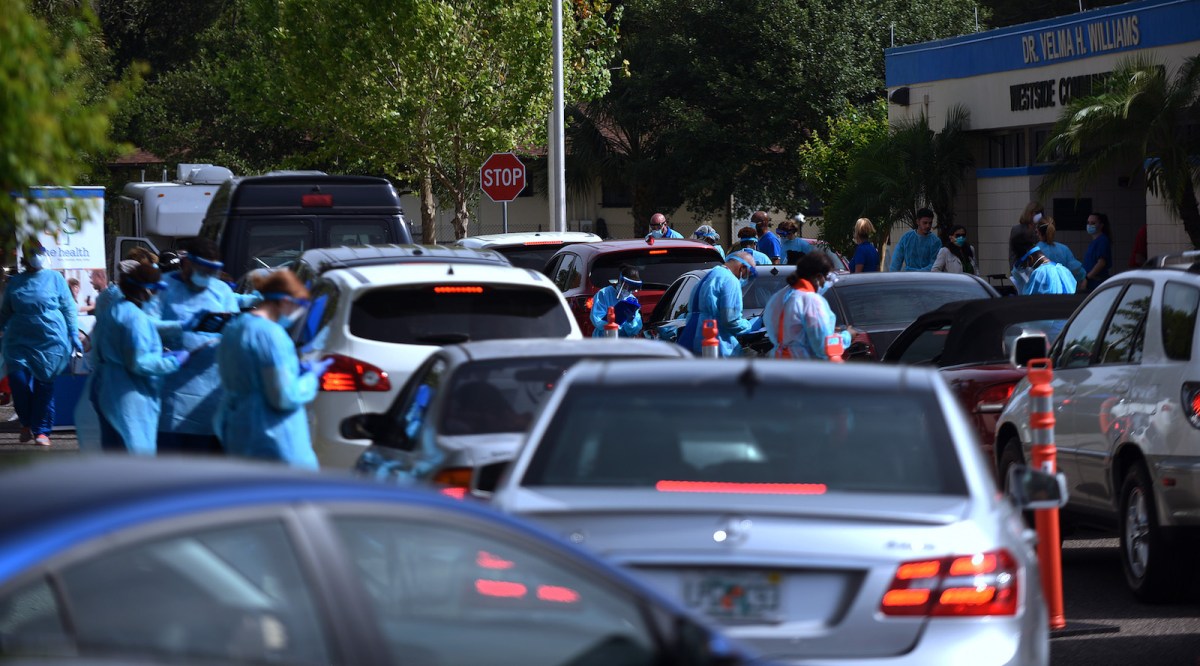 Health workers greet people as they arrive in cars at a mobile COVID-19 testing site at the Westside Community Center in Sanford, Florida Paul Hennessy / NurPhoto via Getty Images

Drive-thru COVID-19 testing was devised as a safer way to get people the medical assessments that they need while limiting other patients’ potential exposure to the disease. You could get probed by a mask-clad medical professional within the protective pod of your private vehicle and be on your way to await the results by phone. The idea got President Trump’s endorsement as early as March 13, when during a Rose Garden briefing he announced a website (that did not yet exist) that would direct people to an (again, nonexistent at the time) national network of drive-thru testing sites. In the two months that followed, business chains such as CVS, Walgreens, Target, and Walmart have started offering drive-thru COVID-19 tests at select locations with “thousands” more sites slated to open by the end of May.

But a necessary prerequisite for such a test is, of course, owning a car — or knowing someone who is willing to lend their car to a person who has at least some reason to believe they are infected. I, of course, did not have the former (and asking for the latter felt like it would be an unfair burden on any friend).

I’m hardly alone in living car-free — according to the latest U.S. census, nearly 9 percent of households do not have any available vehicles. In larger cities, the proportion tends to be much higher. It will likely come as no surprise that race and income also play a role. The rate of carlessness among households of color is about double that of white households, and households with incomes below $25,000 a year are nine times more likely to be carless.

There are many reasons people end up not owning cars. For some, the choice is made for them — cars can be prohibitively expensive to purchase and maintain. Some cannot bear to sit in traffic, or their public transit options render personal cars irrelevant. Still others decide to shed their vehicles because of environmental concerns. Car use has been tied, to a greater and greater extent, to climate change–causing carbon emissions. It’s extremely inefficient to heave a couple of tons of metal around at great speed for the transportation of one single person. Dense downtown neighborhoods have become more desirable due in part to their facilitation of short, car-free commutes. Recent years have seen the development of fairly successful campaigns to get people out of cars and onto public transit, bikes, and simply sidewalks.

My decision to get rid of my car was voluntary and largely financially motivated — but it quickly became a lifestyle ethos. Yes, there was the tiniest degree of smugness about the environmental aspect of it; but more than anything it was freeing. I had liberated myself from hundreds of pounds of metal, thousands of dollars in annual repair bills from the mechanic who was surely ripping me off, and any combustion engine-related climate guilt!

Unburdened by concerns like parking availability or car expenses, I was more easily able to afford apartments in dense, desirable areas. When I needed to run a particularly burdensome errand or take a long weekend trip, I could use a car share or a rental.

Car manufacturers have been peddling their wares using the promise of independence for a long, long time, and were eventually able to shape cities to make independence actually unattainable without a car. But at some point, as city populations grew and streets couldn’t expand anymore to accommodate so many single-occupant vehicles, the freedom afforded by car ownership got whittled down by traffic. And gas prices, and car loan interest, and parking and registration fees.

The effort to get urban planners to prioritize those people and the vitality of their daily lives over vehicles in their design of streets and communities goes at least as far back as urban studies icon Jane Jacobs’ The Death and Life of Great American Cities, which was published in 1961. “The Great Blight of Dullness,” she writes, “is allied with the blight of traffic congestion … A strategy of erosion by automobiles is thus not only destructive to such city intensity as already exists; it also conflicts with nurturing new or additional intensity of use where that is needed.”

As we barreled into 2020, it almost looked like American cities were starting to trend, ever so slowly, toward less car-dependent cities — if you squinted, at least. “There’s been slow progress made toward tangible change,” said Geeti Silwal, principal urban designer with the firm Perkins & Will in San Francisco, noting that it took a full decade to bring the car-free design of Market Street that she worked on to fruition.

And then came coronavirus, a swift wrecking ball for that tentative, incremental driving-optional progress. Any force that demands a bubble of at least 6 feet of personal space is a direct threat to the dense, “lively” city life for which Jacobs and most climate-focused planners have pushed. It has transformed sidewalks into too-narrow thruways, public transit options into probable Petri dishes.

The impact of these shifts is still unclear. For the moment, most people are still driving a lot less, because most cities have some sort of shelter-in-place order. And due to that lack of traffic, some streets are getting converted to safe thoroughfares for bikes and pedestrians. But people will have to leave their homes eventually. In an interview with Streetsblog, San Francisco Municipal Transportation Agency Director Jeff Tumlin declared: “If San Francisco retreats in a fear-based way to private cars, the city dies with that, including the economy. Why? Because we can’t move more cars. That’s a fundamental geometrical limit.”

“There’s still just the strategy of trying to get people to understand that everyone can’t own cars and drive in a city,” noted Katie Wilson, director of the Seattle Transit Riders’ Union, in an interview. “It feels challenging to get people back on public transit, but that needs to happen. There’s just not a realistic scenario where [everyone] can just go back to driving.” 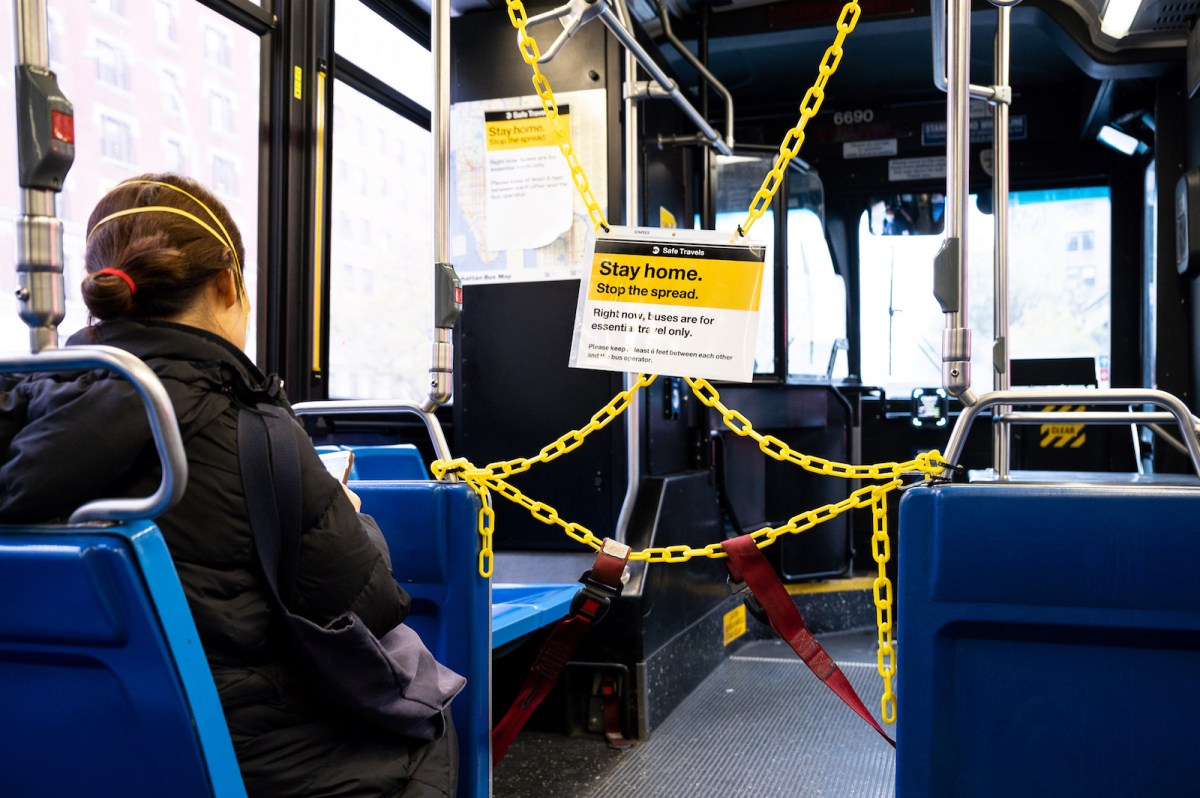 A public bus in New York City is updated with signs and chains keeping passengers away from the driver amid coronavirus crisis. Barcroft Media / Getty Images

The great awakening that the coronavirus pandemic has dealt to city-dwellers, in particular, is that true independence was always a myth. You cannot really protect yourself from coronavirus without measures that protect everyone. You cannot retreat to your car because if everyone does the same, the streets will be filled with a million completely immobile vehicles, trapped by a mass panic of self-protection.

And yet, in the past two months, I have longed for a car. My bike is broken — I took a bus once (to get the bike fixed) and someone got on and immediately took his pants off, which I found, as a lifelong transit rider well accustomed to that sort of thing, strangely comforting — and I am tired of walking the same few blocks of my neighborhood over and over with no real destination in mind. I crave nothing more than real escape; as I have admitted before, I actually love to drive. My deep, dark environmentalist secret is that I find unmatched peace in long highway trips at 80 miles an hour, with drive-thru french fries and an iced coffee the size of my torso in the console. And of course, if I had had a car when I got sick, I might now have some answers about my own past coronavirus status.

But I have craved things that are bad for me before, and I have known better than to make them a permanent fixture in my life. (Most of the time.) I have watched cities like my own make slow, careful progress toward a more car-free future, and I do not want to see that progress destroyed by the illusion that we can turn inward and take care of ourselves just fine.

Almost 60 years ago, Jacobs wrote: “What if we fail to stop the erosion of cities by automobiles? … In that case we Americans will hardly need to ponder a mystery that has troubled men for millennia: What is the purpose of life? For us, the answer will be clear, established, and for all practical purposes indisputable: The purpose of life is to produce and consume automobiles.”

I don’t know what my life will be once this pandemic is over, but what will drive me, philosophically speaking, will not be gas-powered.