Newsom wasn’t the only one connecting the devastating wildfires to our overheating planet. Democratic presidential nominee Joe Biden also chimed in, writing: “Make no mistake: Climate change is already here — and we’re witnessing its devastating effects every single day.” Scientists have long warned that rising temperatures could make wildfires more severe; in California, the area torched by fires each year has quintupled since the 1970s.

But, according to polling, only about three-quarters of Americans believe that global warming is happening — and less than two-thirds understand that it is human-caused. Will the horrific wildfires and choking smoke finally convince the country that it’s time to take action?

Researchers have long suspected that if people can see — or, in the case of acrid smoke from wildfires, even feel — climate change happening, they will be more likely to take the threat seriously. “Theoretically and anecdotally, there is absolutely reason to believe that the wildfires are changing people’s minds,” said Jennifer Marlon, a research scientist at the Yale Program on Climate Change Communication.

But there are some caveats. According to Marlon, the big catch is that people have to know there’s a link between wildfires and climate change — and that jump isn’t necessarily intuitive. Most people focus on what sparked the flames in the first place: Some of the recent infernos were started by lightning strikes or, in one bizarre case, a gender-reveal party gone wrong. And climate change isn’t the only factor making these blazes bigger: Western states have been overzealously suppressing fires for decades and skipping controlled burns, leading to an enormous load of extra fuel. But climate change still contributes hugely, creating the hot, dry, tinderbox conditions that make those fires go from bad to worse. The fire season is now two or three months longer than it used to be, regularly extending well into November.

Many Californians are already connecting the dots. According to Yale researchers, 69 percent of the state’s inhabitants believe that global warming is increasing the severity of wildfires.

Nathan Perkins, a 33-year-old software engineer from Mountain View, California, sees a link between global warming, intense wildfires, and the smoky skies he’s seen recently. “As far as I know, California is one of those areas where it’s going to get drier and hotter — and that just increases the risk of fire,” he said. “In this case, I wouldn’t be surprised if climate change is severely affecting the amount of fires.”

For Perkins, the fires were an unexpected wake-up call. At first he thought the orange skies looked cool — he took photos on his phone and sent them to his girlfriend in New York City. But, after hearing that a summer camp where he volunteered had been devastated by fire, his feelings changed. “The orange glow took on a really different meaning to me,” he said. “It was really oppressive and depressing … a reminder that people and animals and homes are being destroyed.” 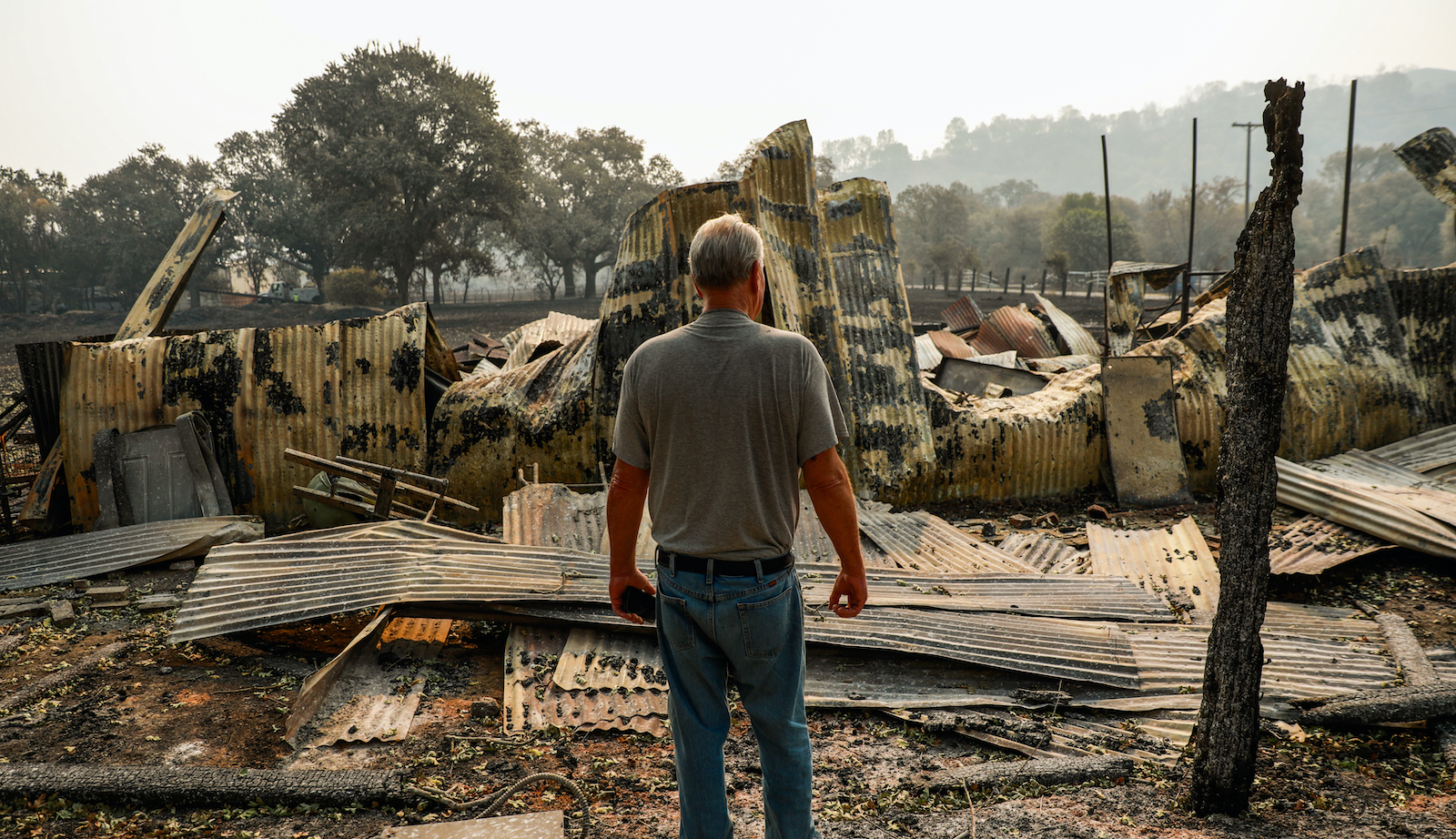 A man looks over the charred remains of his property after the LNU Lightning Complex fire tore through Vacaville, California on Aug. 24, 2020. Gabrielle Lurie / The San Francisco Chronicle via Getty Images

Karina Huft, a 23-year-old hotel front desk worker in San Francisco, felt similarly. Last Tuesday, Huft also woke up to a sky so dark she thought it was nighttime; by mid-morning, the sky had turned a thick, dark orange. “I think about [climate change] all the time, especially as I’ve gotten older,” she said. Her social media has been filled with people connecting the fires to global warming: “People have been a lot more vocal about it, now that they see it with their own eyes.”

But for residents outside of California, that link might not be so clear. Only 52 percent of people across the country make the link between climate change and the Western blazes, according to Yale’s polling. And Marlon warns that people who dismiss the issue are unlikely to be convinced so easily. “If you’re predisposed to not even believe in climate change, then even if you do experience a wildfire, you’re not going to suddenly say, ‘Oh, global warming is here, it’s happening!’” Marlon said.

Some Americans have more pressing concerns on their minds. In Salem, Oregon, where nearby blazes caused sky-high air pollution, local fitness store owner Susan Gallagher said she didn’t really think about climate change in relation to the wildfires, even as thick ash coated the air and the roofs of cars. Instead, she was focused on her business and the health of her community. “We just hope and pray for rain, and an end to it,” she said. “And we pray for all the people who have been directly affected.”

Still, there’s reason to think that the steady drumbeat of disasters is changing minds. According to Yale data, around 8 percent of Americans report that they recently “changed their opinions” on global warming, with most becoming more concerned about the issue. Many say that their change of heart was due to experiencing the dangers of climate change firsthand, or witnessing disasters from afar.

There’s even some evidence that living through an extreme event can lead people to adopt climate-friendly behaviors. In one 2011 study in the journal Nature Climate Change, researchers found that people who directly experienced flooding in the U.K. were more willing to greatly reduce their energy use to cut carbon emissions. But small-scale, individual actions won’t be enough to stem the crisis; that’s part of why some politicians, including former President Barack Obama, have used the wildfires as a chance to encourage people to vote.

Huft, the hotel worker, hopes that other people will recognize the fires as a sign of a changing climate. “If this doesn’t open people’s eyes,” she said, “I don’t know what will.”