Trump shows us what happens to a climate denier in denial 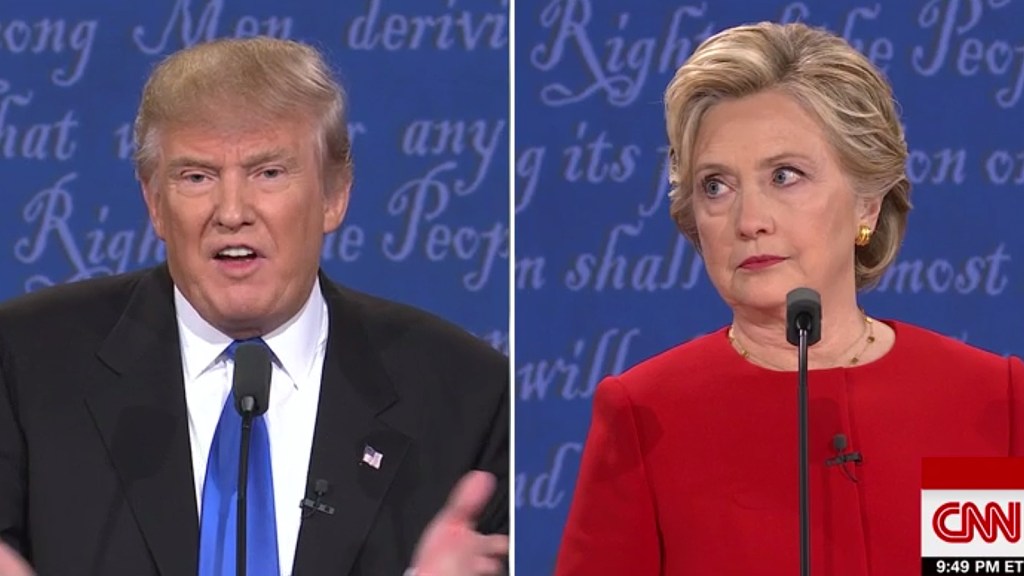 Trump shows us what happens to a climate denier in denial

If Donald Trump is trying to run away from his well-known position as a climate change denier, he’s doing a terrible job at it.

Less than 12 hours after a debate against Hillary Clinton in which he personally denied calling climate change a hoax, Trump’s campaign manager and running mate offered different versions of what the candidate supposedly believes: He thinks it exists but isn’t human-made, or he thinks it is human-made but doesn’t want to do anything about it.

Regardless of what his surrogates are saying on TV this morning, there’s a long Twitter record of Trump’s unscientific statements about climate to fall back on. His position is clear: It’s a hoax. What’s less clear is what he hopes to gain by changing that position now. Could it be that even the Trump campaign recognizes that climate denial in the face of clear evidence is a losing position in a general election?

Certainly Clinton seems to think it’s a strong avenue of attack: Unprompted by moderator Lester Holt during the debate last night on Long Island, Clinton said: “Donald thinks that climate change is a hoax perpetuated by the Chinese.”

Because he couldn’t help himself, Trump only managed to emphasize her point by interjecting, “I did not,” sending all the fact checkers to Twitter, where his four-year-old tweet saying exactly that became the top retweeted tweet during the debate:

The lying doesn’t stop there, though. Tuesday morning, Trump campaign manager Kellyanne Conway was asked on CNN if her candidate thinks global warming is a hoax. Conway insisted, no, he doesn’t believe it’s a hoax, but he does believe “that climate change is naturally occurring, that there are shifts naturally occurring.”

Then, on the very same show, Trump’s vice presidential pick took an abruptly different tone on climate change. Indiana Gov. Mike Pence, who himself once called global warming “a myth,” suggested that greenhouse gases have “some impact” on the climate.

“There’s no question that the activities that take place in this country and in countries around the world have some impact on the environment and some impact on climate,” Pence said. “But Donald Trump and I say: Let’s follow the science, but for heaven’s sakes, let’s not go rushing into the kind of restrictions on our economy that are putting Americans out of work.”

When it isn’t Trump himself talking, his campaign has sometimes tried to soften his position on the climate issue. “Perhaps we should be focused on developing energy sources and power production that alleviates the need for dependence on fossil fuels,” Trump (or his campaign) wrote to ScienceDebate earlier this month.

It’s clear why Clinton wants to emphasize Trump’s inconsistent and unscientific climate positions. In light of recent polls, her campaign has zeroed in on more millennial-friendly messaging, in hopes of winning over young voters looking to third-party candidates like Green Jill Stein or Libertarian Gary Johnson.

Clinton largely sidelined climate change in her speeches after Bernie Sanders conceded in the primary contest, but she’s now turning to the issue again as part of a strong messaging strategy. The differences between her and Trump are more stark on climate change than on nearly any other issue — one accepts scientific consensus, the other doesn’t.

So while Clinton’s plan was clear, what the hell was Trump doing?

Clearly, calling a respected field of science a “hoax” on the national stage is not the image his campaign wants to put forward. Trump’s position on climate and energy isn’t that different from the rest of the GOP, but in a normal presidential year, he might have at this point recast his climate denial as mere reluctance to act, to make the position more palatable to the general election voter.

Yet Trump’s not running a normal campaign in any sense, so climate change gets the same brash treatment as every other issue the candidate touches on.

There were plenty of other positions that the candidates skirmished over last night, and Clinton implored the “factcheckers, get to work” a few times. Trump once again said he never supported the Iraq war, which was a lie; he did.

Conway, Trump’s spokesperson, in fact tried to pivot to the Iraq war this morning on CNN when asked about Trump’s climate answer. The Trump campaign clearly isn’t eager to answer questions on the subject.

But in denying his denial, what’s the logic? He’s been fine with it for years. His 2012 China tweet wasn’t just a poorly considered slip, but one of many:

NBC News just called it the great freeze – coldest weather in years. Is our country still spending money on the GLOBAL WARMING HOAX?

Snowing in Texas and Louisiana, record setting freezing temperatures throughout the country and beyond. Global warming is an expensive hoax!

Was Trump joking all those times he called it a hoax?

Hard to believe. And his voters sure don’t.

Other than Trump’s unexpected backtrack (or not) on climate, we didn’t learn anything new about either candidate’s energy positions in this debate. The themes of “prosperity” and “securing America” might have lended themselves to discussing both climate, which the military calls a significant threat, and clean energy, which has overtaken the fossil fuel industry as a job creator. But as is usual in presidential debates, the moderator didn’t see fit to steer the candidates in those directions.

Clinton, however, did cite two of her climate and energy proposals: deploying a half-billion solar panels and rebuilding the electric grid. Trump never once mentioned his energy proposals, even forgetting his promises to wave a wand and restore coal country, despite the debate’s focus on American industry in the first 15 minutes.

In the end, though, Clinton didn’t need to go on at length about her climate solutions, because it’s enough for her to draw out the contrast with Trump. He has no position on climate, except for his plan to appoint a climate change denier to lead the Environmental Protection Agency transition.

Clinton for now is content to use Trump’s words against him and let his position speak for itself. Their little exchange on Trump’s tweet did more to help put climate change on the map for future debates than any of Clinton’s policy positions.