Coronavirus pumps the brakes on the electric vehicle revolution 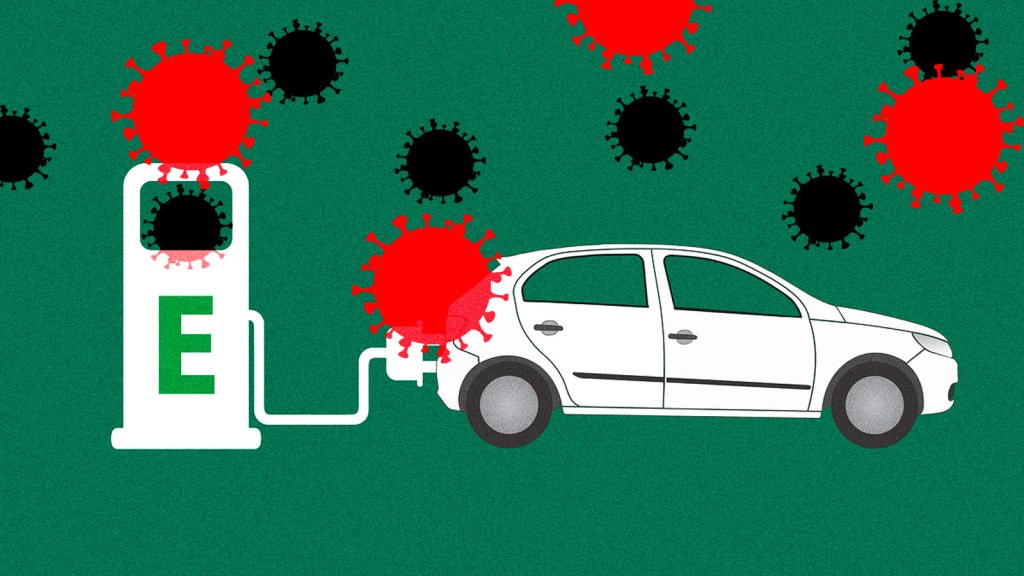 Coronavirus pumps the brakes on the electric vehicle revolution

One of the starkest ways the coronavirus pandemic has upended daily life is its impact on transit: Simply put, we’ve stopped moving around. Flights and cruises are being canceled en masse, subways are losing riders, and highways have become eerily empty as commuter traffic peters out.

Far from just impacting transportation today, the pandemic and ensuing economic fallout could have big implications for the transit systems of tomorrow. Early signs suggest that the electric vehicle market, like the rest of the auto market, is taking a serious hit from COVID-19. For now, it appears to be a short-term stallout. But with the economy headed for recession and the price of oil reaching historic lows, bigger challenges could lie ahead for the EV industry unless governments take proactive measures to ensure a clean transit future.

“Without this effect we’d probably be heading for a record year in global EV sales,” said Colin McKerracher, head of advanced transport at BloombergNEF, a clean energy research firm. In January, McKerracher predicted the world would surpass 10 million EVs on the road in 2020.

Indeed, if early data from China, the world’s largest EV market, is any indicator, clean cars are in for a rough ride. In January, passenger EV sales were down 52 percent compared with 2019 as China scrambled to shut down its manufacturing sector and quarantine tens of millions of citizens. In February, the fallout was even worse: passenger EV sales fell 77 percent while production fell more than 80 percent, compared with 2019, according to data from the China Association of Automobile Manufacturers.

It was an exaggerated version of what was happening to the auto industry at large. For January and February, sales of all vehicles were down 44 percent across China, according to a BloombergNEF research memo shared with Grist.

Electric vehicles “remain particularly exposed due to a nascent supply chain and being largely a premium consumer purchase,” analysts at consulting firm Woods Mackenzie wrote last Tuesday in a memo shared with Grist. “The outsized decline in EV sales compared to ICE [internal combustion engine] in China … highlight[s] this impact.”

With China’s COVID-19 outbreak now largely contained, the industrial powerhouse is working hard to restart its economy, and these dismal numbers should start looking better soon, McKerracher said. But the European EV market, which saw incredibly strong growth at the start of the year, is now bracing for famine. Ditto for the United States.

“It’s going to get really ugly in Europe and North America,” he said. “Basically the whole auto market is in trouble, and EVs are not immune to that.”

Last week, General Motors, Ford, Fiat Chrysler, and Honda all agreed to close their North American factories through the end of the month, Axios reported. On Thursday, Tesla announced it would “temporarily suspend” production at its main factory in Fremont, California, beginning this week, according to the Washington Post. The manufacturing freeze comes after Tesla’s new Shanghai Gigafactory was forced to close its doors earlier this year as part of China’s efforts to contain the COVID-19 outbreak. Tesla did not respond to a request for comment on how it expects these recent events to affect business.

David Hart, a professor of technology, science, and innovation policy at George Mason University, thinks the blow to the EV sector will be temporary. “I think the long-term trend toward EVs is pretty powerful,” he told Grist. “My hunch is this will be a passing phase.”

China, in particular, is well positioned to weather the storm, Hart said, citing strong incentives to reduce local air pollution and national industrial policies. McKerracher agreed, pointing out that the Chinese government has played a big role in growing its electric transit sector by setting production quotas and purchasing massive fleets of made-in-China electric taxis and buses to service its cities, trends he doesn’t expect to change anytime soon. (Last week, however, news reports indicated that China was considering relaxing some emissions standards to help automakers sell older car models in wake of the economic downturn.)

Hart and McKerracher are also optimistic about the future of the European EV market, given that the EU just started phasing in new fleet-wide emissions targets for automakers. If there’s economic stimulus for the car industry in Europe, “it’ll be all about EVs,” Hart said.

The United States is more of a wild card. In 2018, the Trump administration proposed freezing Obama-era fuel economy standards and revoking California’s authority to set stricter tailpipe standards on its own, although that proposal has been stymied by industry opposition and legal challenges. Still, it seems unlikely this administration will clamor to make clean transit a priority in future economic stimulus packages.

But there are already signs that Democrats in the House and Senate may attempt to do just that. And if a Democrat wins the White House in 2020, priorities could shift radically.

One way that future government stimulus packages could help EV markets pull through an economic crisis brought on by COVID-19 is by investing big in charging infrastructure. McKerracher said he expects China to make such an investment to help stimulate its auto industry, and while he’s less certain about the US, there would be precedent.

“There was a big push after the last financial crisis on smart grid spending and modernizing overall electrical infrastructure,” McKerracher said, referring to the American Reinvestment and Recovery Act of 2009. With COVID-19, there’s once again “going to be a big surge for shovel-ready infrastructure projects. I think charging infrastructure is a great one.” Indeed, even before COVID-19 Democratic frontrunner Joe Biden was calling for half a million new EV charging stations to be built by the end of 2030.

Another way that the U.S. government could support clean transit would be to make any auto industry-wide bailouts contingent on new fuel economy standards, Hart said. This, too, would have echoes of the last financial crisis, when the Obama administration leveraged auto industry bailouts to get car companies to agree to move toward greater fuel efficiency.

Emergency aid legislation “must focus on helping workers immediately while ensuring the sustained strength of the American economy,” Florida Congresswoman Kathy Castor, Chair of the House Select Committee on the Climate Crisis, told Grist in an emailed statement. Castor said that extending tax credits for electric vehicles “would help families, workers and businesses in the short term, while also paving the way for a healthier America for decades to come. It’s also important to maintain and strengthen emissions standards for the auto industry, in order to protect our clean air and drive innovation in reducing pollution.”

Absent a proactive stimulus package, America’s EV revolution could fall behind China’s and Europe’s — especially if oil prices remain very low. To consumers on the fence, cheap oil might make EVs seem like a less financially attractive purchase by lengthening the car’s “payback period.” However, both Hart and McKerracher said that for individual consumers, the price of oil is likely secondary to the up-front cost of electric cars, which is dropping as battery prices continue to fall.

One area where low oil prices could create additional headwinds is for businesses like Amazon that have committed to purchasing fleets of electric vehicles to meet climate targets, McKerracher said. “If oil prices stay really low, the total cost-of-ownership calculation is quite different,” he said. “Overall, everyone’s going to be less risk averse for the next 12 months.”

As with many other industries, the EV market’s best hope may be that government measures to limit the immediate spread of the pandemic and ensuing economic devastation are successful. Beyond that, placing clean energy front-and-center in recovery plans will be key to ensuring that the dip in carbon emissions the world is now seeing at great expense to human livelihoods is not for nothing, but rather a starting point toward building a better future for everyone.