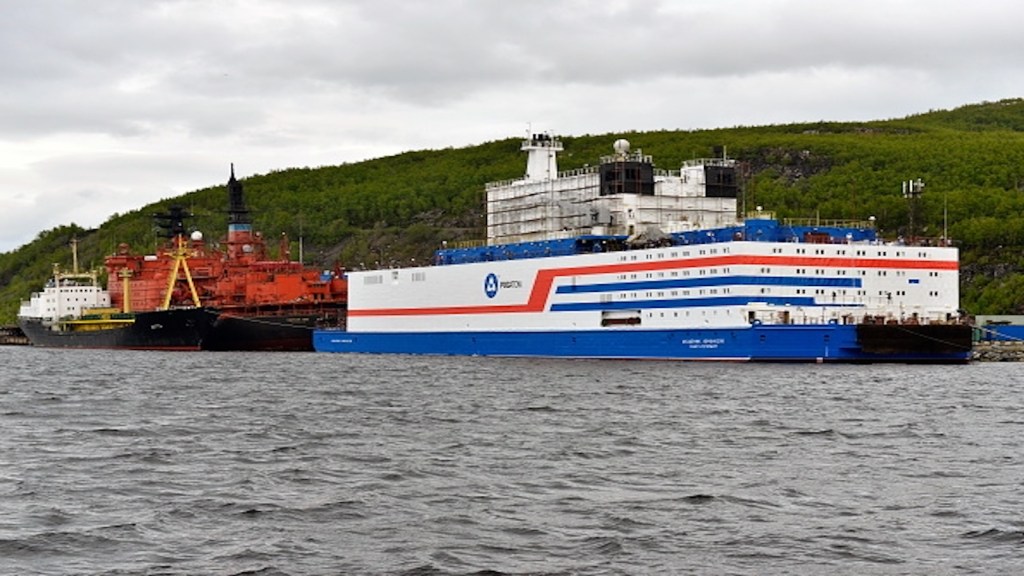 The first floating nuclear power unit in 40 years, the Akademik Lomonosov. Photo by Lev FedoseyevTASS via Getty Images
out to sea

Floating barges fitted with advanced nuclear reactors could begin powering developing nations by the mid-2020s, according to a Danish startup company.

Seaborg Technologies believes it can make cheap nuclear electricity a viable alternative to fossil fuels across the developing world as soon as 2025.

Its seaborne “mini-nukes” have been designed for countries that lack the energy grid infrastructure to develop utility-scale renewable energy projects, many of which go on to use gas, diesel, and coal plants instead.

The ships are fitted with one or more small nuclear reactors, which can generate electricity and transmit the power to the mainland. The first ship of this kind began supplying heat and electricity to the Russian port of Pevek on the East Siberian Sea in December 2019.

Troels Schönfeldt, the chief executive of Seaborg, said the company’s 100-megawatt compact molten salt reactor would take two years to build and would generate electricity that would be cheaper than coal-fired power.

Seaborg has raised about €20 million ($24 million) from private investors, including the Danish retail billionaire Anders Holch Povlsen, and received the first of the necessary regulatory approvals within a four-phase process from the American Bureau of Shipping this week.

Most developing nations have been unable to pursue nuclear energy because it requires a carefully managed regulatory regime to prevent nuclear accidents or proliferation of materials that could be used to create nuclear weapons.

Seaborg hopes to begin taking orders by the end of 2022 for the nuclear barges, which would be built in South Korean shipyards and towed to coastlines where they could be anchored for up to 24 years, he said.

The “turn-key solution” is important to fast-growing developing economies to power their nascent industries, purify drinking water, and produce clean-burning hydrogen as demand for energy access rockets in the years ahead.

“The scale of the developing world’s energy demand growth is mind-boggling,” Schönfeldt said. “If we can’t find an energy solution for these countries, they will turn to fossil fuels and we surely won’t meet our climate targets.”

The International Energy Agency has found that the accelerating demand for electricity — due to a growing global population and rising levels of affluence — is on course to outpace the growth of renewable energy and increase reliance on fossil fuels.

Although nuclear energy has been used onboard seaborne vessels for decades to power submarines and “icebreaker” tankers, Seaborg’s design would be one of the first examples of a commercially available nuclear barge used to provide electricity to the mainland.

Chris Gadomski, a nuclear analyst at Bloomberg New Energy Finance, said: “The concept of a floating nuclear power plant has been around for a long time, and makes a lot of sense. But there are concerns.” There was inherent risk involved with nuclear reactor technologies and floating power plants, so combining two could raise serious questions for investors and governments, he said.

“In places like the Philippines and Indonesia it makes a lot of sense. But it wasn’t so long ago that the Philippines was the site of a major tsunami, and I don’t know how you would hedge against a risk like that,” he added.

Jan Haverkamp, from Greenpeace, said floating reactors were “a recipe for disaster” including “all of the flaws and risks of larger land-based nuclear power stations.” “On top of that, they face extra risks from the unpredictability of operation in coastal areas and transport — particularly in a loaded state — over the high seas. Think storms, think tsunamis,” he said.

Schönfeldt said the advanced reactor was designed to be as safe as possible in a worst-case scenario accident, with a system causing the radioactive material to form a solid rock outside of the reactor core so it cannot disperse into the air or sea as a catastrophically harmful gas or liquid.