Which country has the highest percentage of hungry people? I’ll put the answer at the bottom. (Hint: it’s not located in Africa.)

The United Nations’ annual report on hunger has arrived bearing sobering factoids like this one, along with some remarkably good news: There are now 100 million fewer chronically hungry people than there were 10 years ago.

The improvements vary dramatically. In southeast Asia, 30 percent of people were undernourished in 1992; now it’s down to 10 percent, a stunning accomplishment. But in the Middle East (here labeled western Asia), the percentage of undernourished people has actually gone up. Worldwide, 11 percent of people still go through most of their lives hungry. 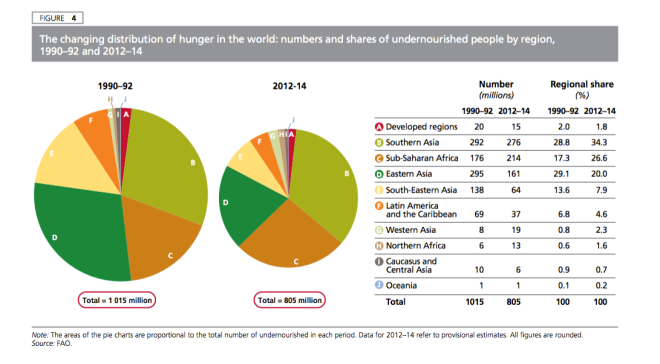 The UN’s Food and Agriculture Organization says that the Millennium Development Goals on hunger are within reach “if appropriate and immediate efforts are stepped up.”

What form should those efforts take? The UN urges everyone to remember that hunger is a fundamentally political problem:

Lack of food, as we’ve said, is not the problem. The world produces enough food for everyone to be properly nourished and lead a healthy and productive life. Hunger exists because of poverty, natural disasters, earthquakes, floods and droughts. Women are particularly affected. In many countries they do most of the farming, but do not have the same access as men to training, credit or land.

Hunger exists because of conflict and war, which destroy the chance to earn a decent living. It exists because poor people don’t have access to land to grow viable crops or keep livestock, or to steady work that would give them an income to buy food. It exists because people sometimes use natural resources in ways that are not sustainable. It exists because there is not enough investment in the rural sector in many countries to support agricultural development. Hunger exists because financial and economic crises affect the poor most of all by reducing or eliminating the sources of income they depend on to survive.

And finally it exists because there is not yet the political will and commitment to make the changes needed to end hunger, once and for all.

But how do you go about fixing those problems and mustering the political will? The new report suggests:

Hunger reduction requires an integrated approach, which would include: public and private investments to raise agricultural productivity; better access to inputs, land, services, technologies and markets; measures to promote rural development; social protection for the most vulnerable, including strengthening their resilience to conflicts and natural disasters; and specific nutrition programmes, especially to address micronutrient deficiencies in mothers and children under five.

In other words, the technical solutions can help with the political solutions and vice versa. This is a bit of a chicken and egg problem: Which do you do first: stop the war, or help farmers grow more food? If people are hungry, perhaps it’s better to send grain rather than soldiers. But if militants grab and sell the grain, we’re back to square one. The answer to the chicken and egg question seems to be: both.

As for the answer to the question I began with: Haiti is the nation with the highest percentage of hungry citizens. An astonishing 52 percent of people there are undernourished.