The GMO debate is a tar pit of the mind: Partisans repeat the same talking points for decades on end, and nothing ever seems to change. If you’ve been holding out any hope that there is an objective reality and that evidence of this reality might change minds and shape policy, then the National Academies of Sciences is here for you. Abraham Lincoln set up this organization to provide independent scientific guidance, and it has been the gold standard ever since. So, it’s worth paying attention to its latest report assessing all the science on genetically engineered crops.

The National Academies released this report on Tuesday. It’s really good. If you want to know what the deal is with GMO crops — whether you are interested in food safety, environmental effects, or social consequences — go read it. It’s clear and accessible. And it’s just 400 pages.

What’s that you say? You just want to know if GMOs are good or bad? The team of researchers that assembled the report knew you would say that.

“We received impassioned requests to give the public a simple, general, authoritative answer about GE crops,” they wrote. But instead of drawing sweeping conclusions, the report keeps coming back to the fact that every crop is different. The main generalization we can take from it is that we shouldn’t make generalizations about GMOs.

This sounds like a cop out, but it’s potentially revolutionary. The National Academies wants us to stop obsessing over whether something is a GMO, and ask instead if a given crop makes the world better or worse.

If we took this “stop generalizing” exhortation seriously, it would profoundly change the way we regulated GMOs. Instead of applying special scrutiny to how crops are bred, regulators would focus on which new foods pose the greatest risks. The researchers recommended regulation “that is based not on the breeding process but on considerations of novelty, potential hazard, and exposure as criteria.”

The report reprises this anti-generalization theme throughout. A few examples:

We can’t rope off GMOs and make a generalization about them being more safe or less safe overall. The researchers identified “no differences that would implicate a higher risk to human health” from eating GMOs. And they noted that their previous reports have found “no strict dichotomy between genetic engineering and other forms of plant breeding with respect to risk.”

Are GMOs behind rising yields?

The evidence doesn’t support a broad assertion that GMOs have bumped up crop production. As the graph below illustrates, yields were rising before the introduction of GMOs, and continued rising afterward. There are specific instances where GMO crops have increased yields, but in general: “The nation-wide data on maize, cotton, or soybean in the United States do not show a significant signature of genetic-engineering technology on the rate of yield increase.” 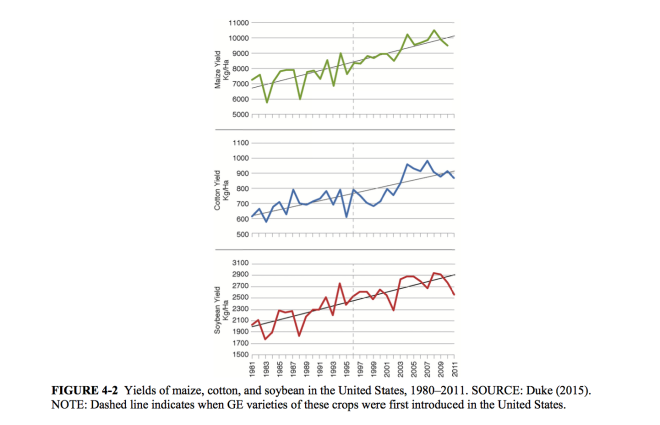 Food production is the single biggest cause of environmental degradation. That much is clear. But when researchers tried to find evidence to pin some of these problems on GMOs specifically, they found “no evidence of cause-and-effect relationships between GE crops and environmental problems.” In other words, they’re no more guilty than regular crops.

Do we need GMOs to feed the world?

To feed the world’s growing population, we need to increase food production and decrease food waste. The researchers noted that some GMOs would help with both challenges, but cautioned against generalizing. “Treating genetic engineering and conventional breeding as competing approaches is a false dichotomy; more progress in crop improvement could be brought about by using both conventional breeding and genetic engineering than by using either alone.”

And of course what the researchers call crop improvement is one part of the solution. We shouldn’t let that research into breeding better crops suck money away from other proven ways to boost yields, like “agroecologically sustainable farming, irrigation, and fertilizer use,” researchers said.

To read about the researchers’ politics and claims of bias against the National Academies of Science, see this by NPR’s Dan Charles.

The best straight news summary of this report I’ve seen comes from Andrew Pollack at the New York Times.

But I really do urge readers to look at the report itself. It’s free to download and full of useful details. You don’t have to read the whole thing: You can search for terms you are interested in — monarchs, women, patents — and get an all-inclusive summary of the state of the science. It’s a valuable document, and I hope that journalists and advocates will use it as a resource.