If there was some stock index fund that covered organic food businesses, I’d want to invest my savings in it. In the United States organic food sales have grown steadily at around 10 percent a year since the Great Recession (and at higher rates before that), which puts the stock market to shame.

In 2015 organic product sales revenue grew 11 percent, while the rest of the food market grew at a rate of 3 percent, according to the Organic Trade Association’s annual survey of the industry. Total sales reached $43.3 billion, which makes the organic industry a force to be reckoned with. For comparison, Monsanto brought in just under $15 billion in revenue last year, and Whole Foods brought a little over $15 billion. 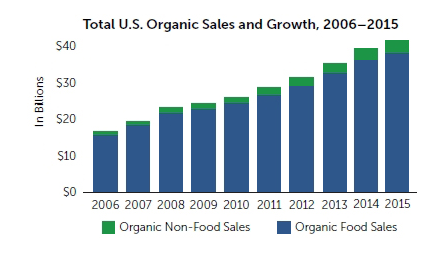 When people have the disposable income they’re pretty quick to take a step up the price ladder from commodity food. Organic food still only amounts to five percent of the U.S. market, which suggests that there’s room for more growth.

The term organic doesn’t automatically mean the food is produced with the best environmental practices, or that it’s healthier and tastier, but it often is: The higher prices provide farmers with bigger margins, and that gives them a greater ability to attend to quality and stewardship.

Here’s our explainer on what organic signifies.