Tough times for Chipotle, but McDonald's is doing just fine 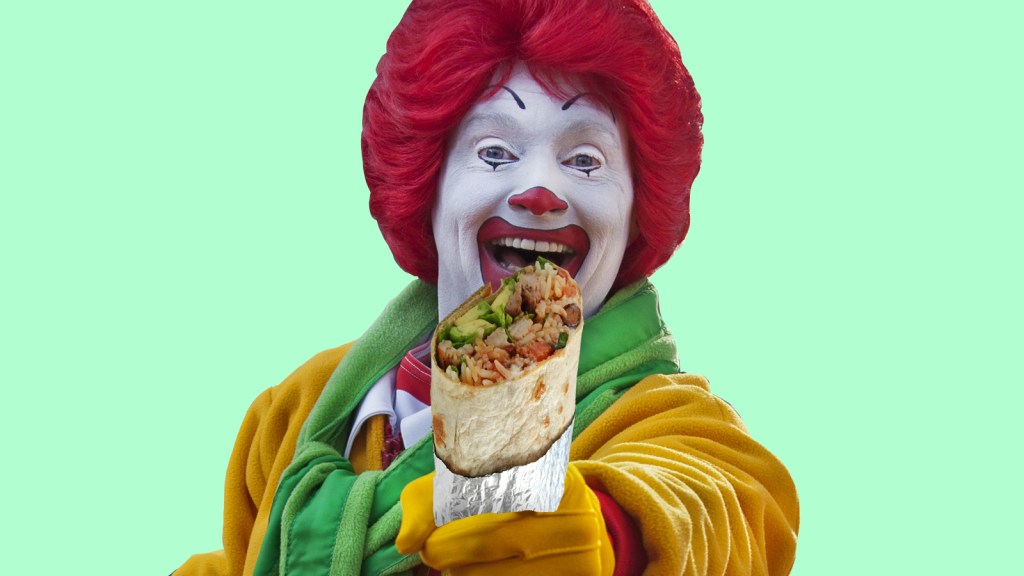 Tough times for Chipotle, but McDonald’s is doing just fine

Below is an excerpt from the Grist original production, Waiting for Customers. The play takes place in January 2016, as Chipotle begrudgingly cedes the hearts of the American fast food-eating public to its ex-boyfriend, McDonald’s.

Scene: A strip mall in suburban America, about 2 p.m — just after the lunch rush. A smug, be-Yeezy’ed Ronald McDonald crosses over from beneath his Golden Arches, sipping a 32-ounce suicide (Dr. Pepper, Hi-C Orange Lava Burst, and Sprite — the usual). Making his way across the parking lot, he saunters up to a gaunt, desperately chipper Steve Ells, hovering by the door of Chipotle and thanking every customer for their business as they exit the restaurant.

RM: Hey — we all hit rough patches. It’s the nature of the biz! Trust me, I’ve been there. Here, you look hungry. (Pulls a now-available-all-day Egg McMuffin out of his pocket and hands it to Ells).

SE: Please, like I’d ever eat that “food.” And there’s no we, you clown — Chipotle isn’t fast food, it’s Food With Integrity. We care about animals, and we care about our workers. We even care about the damn planet! And we don’t use creepy characters to peddle our food; we use earnest cartoons and ingredients that are fresh and healt–

(Silence. Ells smiles big for the last two customers walking out, who are mumbling something about the onset time for food poisoning.)

RM: Listen, this’ll all blow over. If there’s anything that I’ve learned in my decades of experience, it’s that the American public will eat anything if it’s cheap and delicious enough, even if it could kill them. You’ll see. And hey — if you ever wanna talk, you know where to find me. (McDonald leaves the McMuffin on a bench next to Ells, winks, and walks back across the parking lot.)

SE: (Grabbing the McMuffin and launching it into the sea of parked sedans, Ells screams back at McDonald). You’re loving this! Aren’t you, McDonald? YOU’RE LOVIN’ IT!

Yes, 2015 was a rough year for the poster child of fast casual dining. First, Chipotle announced that it was going GMO-free, to which a jaded public responded: “Nice try with your pseudoscience, you corporate panderers!” Then, serious contamination issues in Chipotle restaurants sickened nearly 500 people around the country. As a result, same-restaurant sales were down 14.6 percent in the last quarter, and the chain is now facing criminal charges in California, where one of its restaurants caused a norovirus outbreak that affected more than 200 people.

At the same, McDonald’s dusts itself off after seven straight quarters of declining sales. The chain is still a long way from its heyday as America’s most wholesome eatery — and knowing what we do now about its operations, that day will likely never come again. But here’s more from Quartz on how these two chains are looking at 2016 from swapped positions:

Let’s start with Chipotle. The outstanding comparable store sales that buoyed Chipotle’s stock in 2014 became a drag in 2015. Despite the company’s repeated warnings that double-digit growth would be hard to maintain long term, Wall Street was still disappointed last year with Chipotle’s increasingly tepid results. Then, in the final months of 2015, the health scares began. E. coli. Norovirus. A restaurant closed for temperature violations. The stock plummeted. For the latest quarter—which Chipotle is expected to report results for in early February—the company has projected a sales drop of 8 percent to 11 percent. In a report released Tuesday (Jan. 5), Credit Suisse said it expects Chipotle’s same-store sales to continue falling through Q3 2016, “barring a heroic promotional/marketing effort to win back customers.”

Now for McDonald’s. Early in 2015, Steve Easterbrook, a 20-plus-year company veteran, took over as chief executive and outlined his vision for McDonald’s to become a “modern, progressive burger company.” It was the closest McDonald’s had come to admitting outright that it needed to become more like fast-casual competitors Chipotle, Shake Shack, and Five Guys. Over the next several months, McDonald’s pushed out a slew of initiatives. It committed to cage-free eggs and reduced antibiotics in chicken. It began testing customized burgers, debuted all-day breakfast, and even gave some workers a raise. Analysts aren’t bullish on any one item, but the combination seems to be working. In October, McDonald’s reported its first great quarter in two years. Its stock is at an all-time high.

Stay tuned for the final act of Waiting for Customers, in which a downtrodden Mark Bittman shows up to lament his misguided attempt to save the planet — and America’s diets — with a billion pounds of packaging.