Environmental injustice and police violence are a dangerous combo 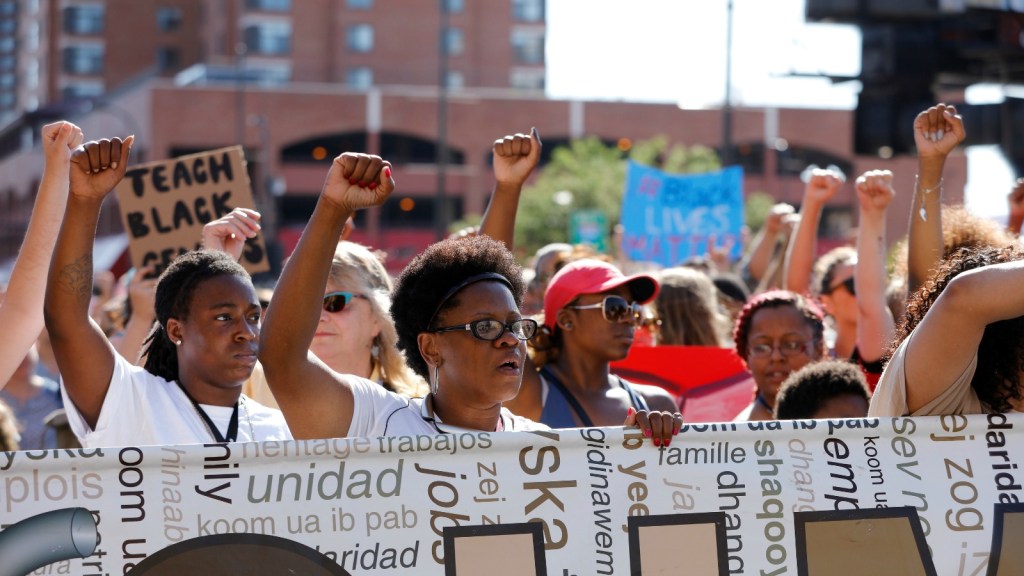 Environmental injustice and police violence are a dangerous combo

As the nation continues to process the deaths of Alton Sterling, Philando Castile, and police officers in Dallas and Baton Rouge, it’s worth keeping in mind that the circumstances of those killings were not all the same. And demonstrators across the country aren’t only protesting police violence against black citizens. They’re also venting grievances about their own stifling living conditions, under which it’s often difficult to ride, walk, or even breathe without police suffocating black lives further.

Place and environment matters when discussing police violence: This is the crux of the University of California, Davis professors Lindsey Dillon’s and Julie Sze’s argument in a forthcoming article for the academic journal English Language Notes.

“We suggest in this paper that the Black Lives Matter movement addresses racism in the U.S. as an embodied experience of structural, environmental insecurity,” they write in an article they’ve been circulating in advance of its publication. “We explore this embodied insecurity through the everyday act of breathing and, specifically, the conditions through which breath is constricted or denied.”

Dillon and Sze point to the death of Eric Garner, an African American killed by New York City police officers in the summer of 2014, as a case study for their argument. Before his death, Garner suffered from asthma, a respiratory disorder that stands as “a specific embodiment of racial and gender inequalities in the U.S.,” write the professors. This bears out across New York City, where asthma rates and deaths are more common among African Americans than among white residents.

In Staten Island, where Garner lived, a black teen with asthma died in May of this year after getting chased by a group of white teens. Investigators have declared the teen’s death only asthma-related, not racism-related. Garner’s death has also been pinned solely on his asthma, which led a grand jury to decline bringing charges against the police officers who put him in a chokehold that lasted for minutes. This despite the fact a medical examiner later called Garner’s death a homicide, from “compressing of the chest” by police.

Moreover, the physical chokehold on Garner — the direct, overt violence by the police — was not recognized as a factor in his premature death. In a sense, then, the state criminalized Garner’s own body: his chronic illnesses and his socially-produced difficulties in breathing became the causes of his death. We find this criminalization of embodiment similar to the ways Michael Brown’s body, in Ferguson, Missouri, was described as a “demon” and like “Hulk Hogan” by the police officer who killed him — racist stereotypes that deprived Brown of his humanity. Whereas Brown’s body was too dangerous, Garner’s body was too sick (though the officer also feared him as large and menacing). In other words, the state individualized and blamed them for their own deaths, rather than situating them within a broader political geography of race and racism in the U.S.

This dangerous combo — environmental injustice and police brutality — goes beyond Staten Island: Think of how toxic lead levels in Baltimore echo the violence Freddie Gray experienced at the hands of police. Or how the petrochemicals from factories along ”Cancer Alley” near Baton Rouge created a deadly living environment for Alton Sterling far before he lost his life to an officer’s bullet.

“We weren’t seeking to bring the traditional environmental angle to understand Eric Garner’s death, and we certainly weren’t trying to detract from the police as an institution and their role in killing him,” Dillon tells CityLab. “We are trying to broaden the notion of what’s meant by the environment — not just this idea of bringing our cities into harmony with “nature.” But also the everyday environment of U.S. city streets, which are formed through … racial segregation such that in some places, life expectancy is higher than others, and are racially structured in ways that contribute to premature deaths.”

In many ways, this is the approach the U.S. Department of Justice took in investigating the Ferguson police department after the unarmed, African-American teenager Michael Brown was killed by a police officer in 2014. The federal investigators didn’t look at the shooting in isolation. Rather, they took account of the myriad ways that the Ferguson police department criminalized black life in Ferguson, Missouri.

Last week, President Barack Obama hosted a town hall on race and policing, which Garner’s daughter Erica Garner called a “farce.” She was present for the forum, but wasn’t able to get a question in about the ongoing DOJ investigation into her father’s death, which happened almost exactly two years ago. She’s still looking for answers, and no police officer has been criminally charged for killing her father. Perhaps the wider view taken by DOJ in the Ferguson case should be adopted to scrutinize the toxic environment Garner was living in — worsened by police, as well.

“In my mind, as someone who has focused on anti-toxics, toxic exposure is also a form of slow violence and slow death,” says Dillon. “So, for many people, the lived experience of police violence and toxic exposure — these different forms of physical vulnerability both live together. We have to think of them together instead of thinking of them separately.”