Philadelphia's oil refinery is dead, but the fight for accountability continues 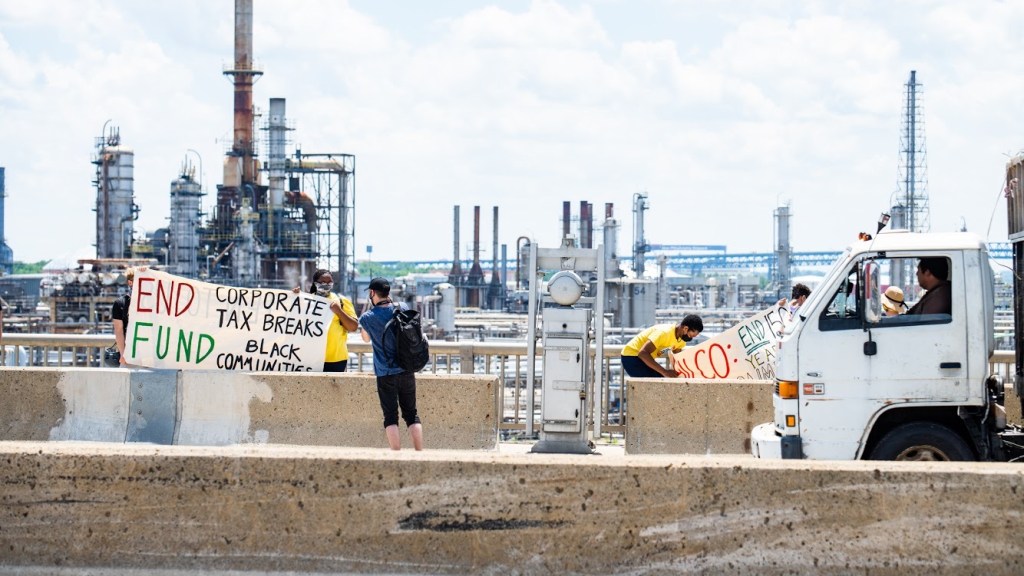 Philadelphia’s oil refinery is dead, but the fight for accountability continues

South Philadelphia residents organized by the grassroots environmental justice group Philly Thrive marched to the site of the former Philadelphia Energy Solutions oil refinery on Monday morning, announcing a set of demands for the new owners of the site. After fighting for cleaner air while the refinery was in operation, and then fighting for it to be put to a cleaner use after it was forced to close, the group is now laser-focused on making sure neighbors to the former refinery are not shut out of plans to remediate and redevelop the property. Their sustained action shines a light on how hard it is for communities with legacies of environmental injustice to win a say in decisions that affect their neighborhoods and their health.

The protest took place one year after a series of explosions and a fire tore through the facility, which had been the oldest and largest oil refinery on the East Coast. Within days of the incident, Philadelphia Energy Solutions announced that damage from the fire made it impossible to keep it open. The company ultimately laid off more than 1,000 refinery workers, filed for bankruptcy, and put the 1,300 acres of prime waterfront real estate up for sale.

Philly Thrive saw the closure as a victory. The group had been raising awareness about the refinery’s public health costs since 2015 through a campaign called “Right to Breathe.” While in operation, the refinery was the largest single source of particulate pollution in Philadelphia. An investigation by NBC News found that it was also leaking benzene, a cancer-causing gas, at levels that were, on average, five times the EPA limit for a year and half prior to the explosion. On top of pollution from the refinery, the predominantly Black communities living on the fenceline of the site in Grays Ferry and across the Schuylkill River from it in Southwest Philadelphia are burdened by exhaust from two major highways and from the Philadelphia International Airport. According to city data, these neighborhoods suffer from higher rates of asthma, cancer, low birth weights, and other diseases than the city on the whole.

At the demonstration on Monday, protestors connected their fight to the larger movement against systemic racism that has swept the country in recent weeks after the killing of George Floyd by a Minneapolis police officer. “People all over the world are standing up against police brutality and calling for radical change,” said Carol Hemingway, Philly Thrive’s membership coordinator and a longtime Grays Ferry resident. “Our fight for climate justice is a part of the same fight: Black lives matter everywhere.”

During a series of meetings hosted by the city last fall, Philly Thrive lobbied to close the site to fossil fuels forever and devote the land to a more sustainable use. When the refinery sold to Hilco Redevelopment Partners in January, they got their wish. Hilco plans to develop the site into a logistics park, promising 10,000 permanent jobs and climate-friendly flourishes like solar panels on the roof and electric vehicle chargers. But while Philly Thrive sees the sale to Hilco as a positive development, the group is concerned about the cleanup and construction to come. The site is heavily contaminated with lead, benzene, and other toxic chemicals from its more than 150 years of use as a petroleum refinery.

At the protest on Monday, Philly Thrive announced two demands for Hilco and the Philadelphia City Council. The first is for the company to commit to involving community members living near the site in planning and decision-making regarding clean-up and redevelopment of the site, and to set clear terms for that relationship. The company has faced criticism from community groups in other cities over a perceived lack of transparency and accountability around similar projects. In the process of redeveloping the site of an old coal plant in the largely Mexican-American Little Village neighborhood in Chicago, Hilco went forward in April with the demolition of a smokestack despite objections from a local environmental justice group and residents. The implosion blanketed the neighborhood in dust, which could have exacerbated respiratory conditions that put residents at higher risk of complications from COVID-19. Prior to the demolition, activists were already disappointed that the new warehouse the company intended to build would bring increased diesel truck traffic, and the pollution that comes with it, to the neighborhood.

Philly Thrive’s second demand is for the city council to cancel its plans to offer tax breaks to Hilco through a state program called “Keystone Opportunity Zones.” “Tax breaks for corporations are unjust, especially while we are in an economic depression and the city cuts social services to save on its budget,” Philly Thrive said in a press release.

A city council bill that would extend the refinery site’s status as a Keystone Opportunity Zone, however, was put forward with the express purpose of “facilitating economic recovery from the COVID-19 pandemic.” According to the legislation, Hilco’s proposed redevelopment was predicated on receiving the tax breaks, and the city would still earn millions in tax revenues from the company.

At the time of publication, the sale to Hilco is not even finalized. In early June, the company asked Philadelphia Energy Solutions to reduce the sale price by $27.5 million from its original $252 million offer, citing the high costs of cleaning up the land and economic uncertainty due to the COVID-19 pandemic. A hearing on the price cut has been scheduled in U.S. bankruptcy court for Thursday.

“We look forward to engaging more fully with the community, as we have on previous projects, once we have closed the transaction,” Hilco said in a statement provided to Grist, in response to Philly Thrive’s demands.