Ask Umbra: Can I feed feral pigs to Fido? Should I? 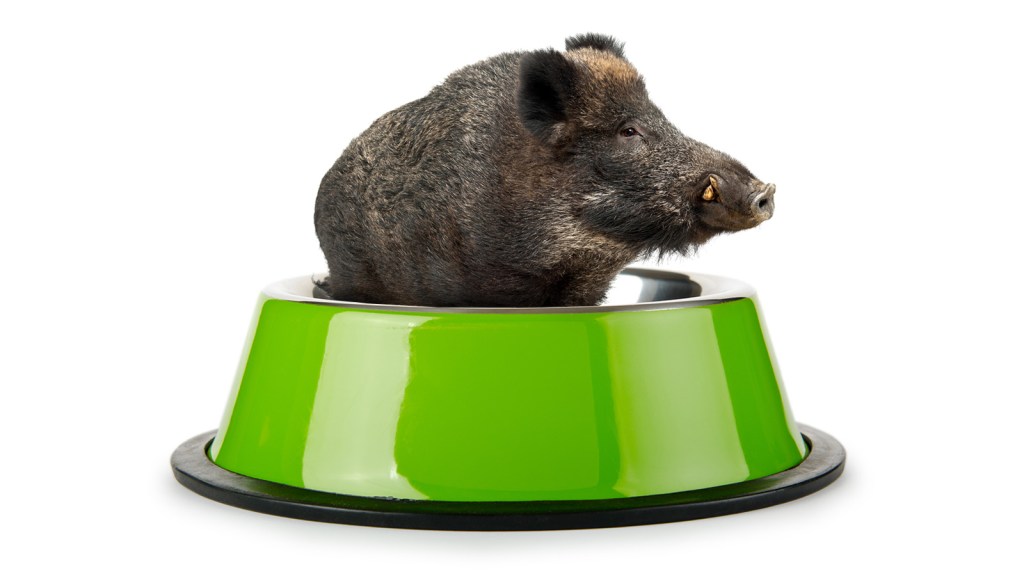 Ask Umbra: Can I feed feral pigs to Fido? Should I?

Q. Wild/feral pigs/boars: I see their overpopulation is a problem in Texas, New York, Missouri, California, and Florida, to name a few. Are these the same animals in my chi-chi dog food featuring “Wild Boar”? Are there other companies taking advantage of this invasive species to make dog food that I can support?

I love the twofer problem-solving you display in your note. Problem: Wild hogs are overrunning sensitive ecosystems all over the country. Problem: Our dogs are hungry. It’s win-win!

The solution sounds perfect, but can we really join the battle against invasive species by … feeding them to our pets?

From what I can tell, the answer is a qualified yes. I’m not sure which brand of puppy chow you’re scooping, Michele, but I could only find a few companies advertising wild boar as a main ingredient. One of them, Taste of the Wild, reports that the boar in Fido’s bowl was indeed a wild-caught, invasive hog from a Texas supplier. A spokesperson at the other one, Natural Balance, also confirmed their boar is wild-caught in the U.S. (There’s also a Canadian manufacturer that offers boar dog treats, but those come from farmed hogs.)

Beyond feral pigs, treat manufacturer Marsh Dog offers canine goodies made from Louisiana nutria, an invasive aquatic rodent that’s gobbling up coastal wetlands in our Gulf Coast states at an astonishing rate. The company sources the treats from nutria trapped or hunted through the state’s population control program, so they may also be worth a taste test.

The idea of eating our way to an invasive species-free world isn’t a new one: Campaigns such as Eradication by Mastication and Eat the Invaders have been advocating just that for years. Non-native fauna such as wild boars, Asian carp, lionfish, green crab, and other unwelcome guests often outcompete our native species, harming biodiversity; pass on diseases; cost us lots of money in damage; and generally muck up ecosystems. If they need to be eliminated anyway, why let a potentially tasty morsel go to waste? And after all, our appetites have a proven record of making quick work of an entire species (see: passenger pigeon, Atlantic cod). Putting invaders in the doggie dish is a natural extension.

So why aren’t all of our pets feasting on wild boar run amok? Put simply, cost. According to Jackson Landers, author of Eating Aliens: One Man’s Adventures Hunting Invasive Animal Species, most dog food is affordable because “it piggybacks on the leftovers from feeding humans. There’s no system where a food source is only feeding into dog food.” That means that any parts of a chicken, cow, or fish from our processing plants that are deemed unfit for human consumption, plus many other somewhat disturbing sources of animal protein, often get shipped to a central rendering plant and processed into pet food ingredients.

So until wild hogs become a regular player on our dinner tables — which would require an organized way of trapping them, slaughtering them in USDA-regulated facilities, and marketing both boar cutlets for us and boar leftovers for pet food companies — we won’t have a systematic source for the stuff. Now, that’s not impossible: I found several outfitters in Texas, including this one and this one, that do just that to supply wild boar to fancy restaurants across the country. But for now at least, these processors remain a niche business.

If you’re not sure about the source of the wild boar in Buster’s chow of choice, I’d contact the company to find out. And while you’re at it, you might also consider gobbling up a few invasive species yourself. If you happen to hunt (and are prepared to deal with a notoriously nasty and dangerous game species), you’ll be interested to know that wild boars have reached problem status in New Hampshire, too.

Of course, that’s a tall order for most of us. You can also buy wild boar from some specialty stores and online distributors (five minutes of searching found me sources for medallions, sausages, ribs, bacon, and burgers). I haven’t tried much boar myself, but advocates swear it’s delicious. But as Jackson Landers points out, much of that wild hog originates somewhere other than New Hampshire. His picks for locally destructive invasives for your plate: shore crabs and common carp. If you’re game to try a few unusual dishes (and if your pooch is anything like the canines I know, he’ll be more than willing), you may find invasive species eradication a surprisingly tasty affair.