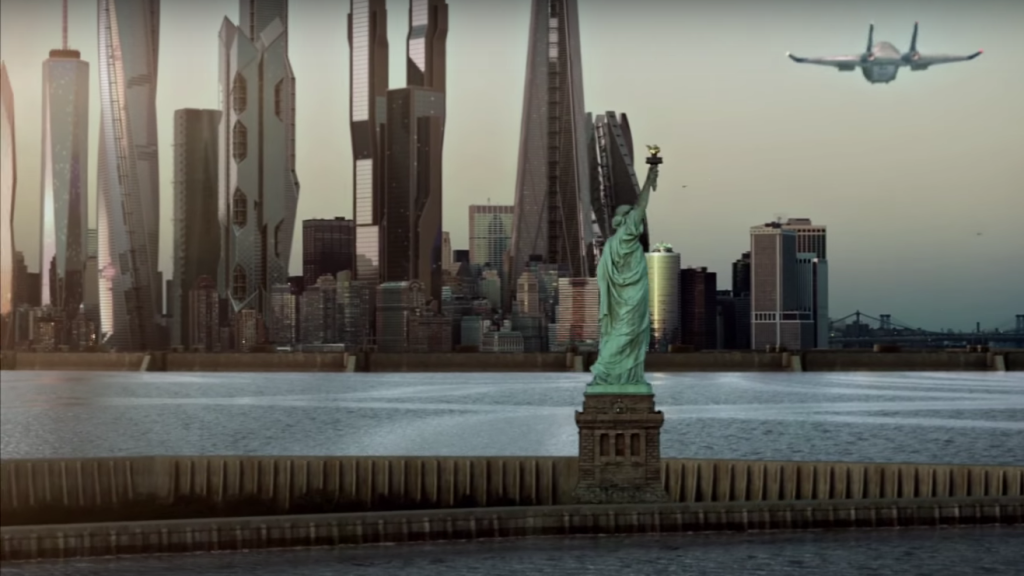 Climate change is showing up in blockbusters and binge watches. So what?

At one point midway through the first episode, the camera pans past the skyline of New York. It’s both familiar and uncanny: There’s One World Trade Center, standing in a thicket of shinier, spindlier towers that announce we are now in The Future. And standing sentinel outside the city is the Statue of Liberty — except now she is ringed by a reinforced seawall, set in ten feet of angry surf.

That’s it. That’s all the reference to climate change we get in the 45 minute-long pilot of The Expanse, SyFy’s new space drama. In fact, only a handful of those minutes are spent on Earth at all.

We’ve talked about cli-fi before; this is something different.

The Expanse joins a small group of recent movies and shows that are definitely NOT about climate change. They have plots and characters with their own urgency — not unlike us, including those of us who spend every day with the words “climate change” at the front of mind, these fictional people have other problems to deal with.

Here are some of the things The Expanse is about, instead of the accumulation of CO2 in Earth’s atmosphere: space colonization, asteroid mining, economic and social inequality, the role of government, human ambition and corruption, the existential dread of being alone in the universe.

In the four episodes aired so far, Earth itself is a bit player, a U.N.-governed colony bidding for control over a cluster of asteroid outposts. But even without top billing, climate change is there, too: Unannounced, unaddressed, lurking in the background like an extra in a crowd scene.

We’ve tried to shine the spotlight on environmental issues when we see them make these sneaky appearances elsewhere in popular culture, from the slowly degrading landscape in last-year’s space psychodrama, Interstellar, to the lovable, self-sacrificing tree who brings Guardians of the Galaxy back down to Earth.

This year, we had Mad Max: Fury Road, a blood-boiling action film that barely decelerated long enough to take in the view, let alone ask why everything ended up so parched and hellish. And that’s OK. As one of us pointed out in our take: “Was I thinking about climate when the opening 45-minute chase culminated with a traffic jam of death getting its shit tossed in an acid trip haboob? Hell, no.”

That’s how you know it’s working, this subtle kind of — I hesitate to even call it commentary. Climate change is just another fact in these movies, along with the fact that the sun burns, the planet spins on its axis, and humans generally try not to die. The environment is an afterthought, an undertone, a faint wash across the backdrop, coloring everything and highlighting nothing.

Where else? On the smaller screen, there’s The Leftovers, an oblique apocalypse tale that is both understated and earth-shaking. There’s True Detective, where the disorder of the world can be seen in everything from how we treat each other to how we treat our environment.

Books like this are even easier to spot. Novels like Ben Lerner’s 10:04 and Peter Heller’s The Dog Stars explore versions of the present and the future where a changing climate leaves its mark on the landscape. That fact serves as a thematic point, and is then dropped in favor of, respectively, some hilarity about artificial insemination and beautiful scenes of friendship at the end of the world.

Hell, there’s even an argument to be made for climate change backgrounding this Justin Bieber video.

Don’t get me wrong. I’m not saying these environmental hints are everywhere. If you look at the most popular film and TV from this year, you’d be hard pressed to put your finger on anything overtly or implicitly addressing the state of our climate. The Return of the Star Wars? Evocative, totally worth discussing, but really rooted in issues of stellar diplomacy. The Mad Men finale? Busy with smoking and the patriarchy. Broad City? I love it, but no. Game of Thrones? Those ice zombies are terrifying, but they’re not what we’re really worried about outside of Westeros.

There are a couple of reasons these kinds of understated references — what should we call them, by the way? “cli sly”? — could be cropping up more and more often, especially in science fiction. For one thing, as we saw a surge in public awareness of climate change this year, it’s becoming harder and harder to build a credible world without it, especially when that world is set in the future. It’s just another quality of evolving life on this planet, taken for granted the same way we assume buildings will get shinier and more forms of transportation will involve flying.

There’s another reason, however. As we are increasingly submitted to natural disaster after natural disaster, the growing frequency of “unseasonable” weather and uncomfortable temperature extremes, perhaps our collective imagination is becoming steeped in the uneasy awareness that there’s something bigger than us, threatening to upset the fabric of our daily lives. It’s no bogeyman under the bed, but it’s just scary enough to add menace in the already shadowy gray areas of the modern world, from the increasing prevalence of technology we cannot control to the interconnectedness of cultures we don’t understand.

We started writing the Grist “Green Screen” pieces because we had a hunch that this was the case. The turmoil in our climate — and broader feelings of nostalgia and fear about how we’ve changed our natural environment — was starting to make its way into popular culture by osmosis. And while that process has been slow, it’s starting to leave its mark on the familiar set pieces of the modern blockbuster or binge watch.

And this is important, because climate change can’t stay in its cozy little corner where it is a specialty issue discussed only by people who consider it their specialty (hello!). Climate change has to move into the mainstream. When it does, it’s never going to be a plot of its own, because we all deal with things that are more important and more personal than climate change all the time. No one wins if the specialists keep insisting that people care about climate change more than their family, or their dog, or food, or sex, or whatever dramas occupy our lives. We all win if we can integrate climate change and the environment into our complete worldview and address it accordingly. And that’s starting to happen — at least at the movies.

Granted, The Expanse is not a mainstream network affair, though it has aspirations to be. (It’s been heralded by a few vocal advocates as the next Battlestar Galactica.) And with Star Wars closing the year with record-breaking box office success, it doesn’t seem so unlikely that SyFy could succeed with their own — albeit grittier, less heartwarming — space opera.

Perhaps it’s no surprise that a sci-fi show has given the clearest form to the sneaking climate appearances we’ve been tracking elsewhere. (I repeat: Still not cli-fi.) In science fiction, travels in outer space are always pointed in relation to Earth: either toward or away, with the planet either a lost paradise or a ruined monument, a utopian pinnacle, or a dystopic hellhole.

In The Expanse, Earth is a little bit of both — one character even refers to Earth as a paved garden, distant and broken but demonstrably better than anywhere else in the solar system. That version of a flawed and rich world, I can recognize. Maybe it’s not such a stretch to see a future, like the present, in which we get the shiny metropolis and human accomplishment — but we get climate change, too.

And maybe outer space is just the perspective we need to see that clearly right now.