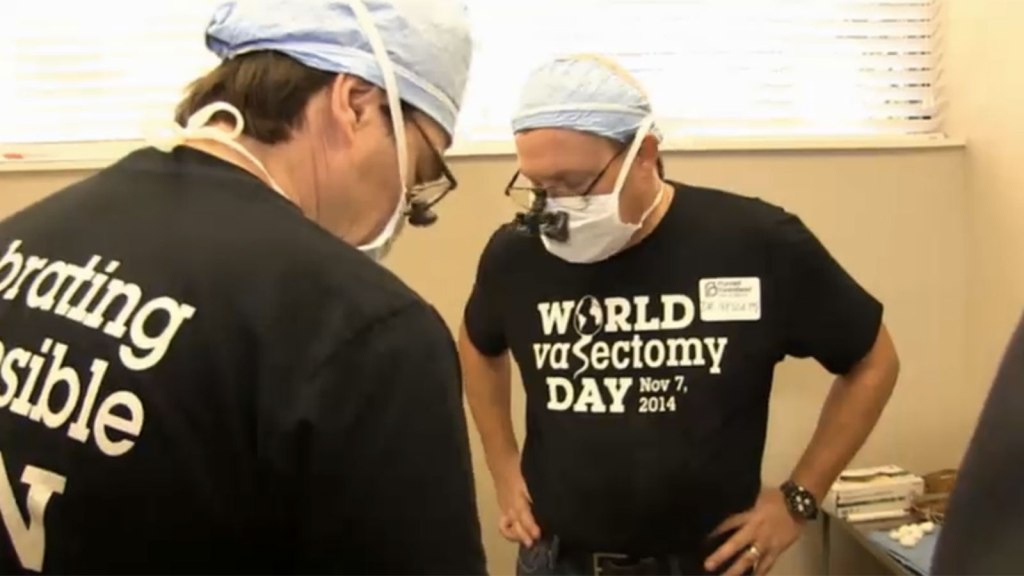 When people talk about contraception, it’s almost always discussed as a woman’s issue. Hell, even when I pitched this series on safe sex and how it relates to climate, I framed it as coverage of women’s issues and really didn’t think twice about it. This makes exactly zero sense, because it takes the equal participation of both sexes to create a child. That’s biology!

And yet, the opportunities to equally share the responsibilities of birth control are few and far between. An anecdote from my own real life experience: When attempting to buy Plan B at a drugstore with the guy who had necessitated the purchase, the cashier refused to split the charge on both of our cards. “I can’t do it,” she said. “Not possible,” the manager reiterated, as the line to the register rapidly grew behind us. And then, gravely: “Only one can pay.” The metaphor was a bit too real.

Men have two favors to distribute at the family planning party, basically: Condoms and vasectomies. Condoms are great for a lot of reasons — they protect against STDs, first and foremost, and they require almost no advance planning. But as far as preventing pregnancy goes, their effectiveness rate is not great. In fact, if a woman depends on condoms as her primary form of contraception over a period of 10 years, with typical use, there’s an 86 percent chance that she will have an unintended pregnancy during that time. (Re: Failure with “typical use” — please see Plan B story above.)

Vasectomies, admittedly, are a pretty extreme option. They’re surgical and permanent — although they are reversible, albeit only by undergoing a second surgery — and a lot of men are fairly apprehensive about someone going in and snipping things in their scrotum. (That’s the technical medical description of the operation, FYI.)*

But in the words of Greg Hanscom, Grist Senior Editor and Designated Office Dad — so he has experience in this matter! — “dudes need to step the fuck up.”

Dr. Doug Stein co-founded World Vasectomy Day — which falls on November 7 — to encourage men to consider stepping the fuck up, so to speak. How exactly does one commemorate World Vasectomy Day? By performing some strategic snips live at a Planned Parenthood in Kissimmee, Fla., in front of an audience, broadcast to the world.

“But not more than I normally would on a Friday,” Stein clarifies. “What’s different in what I’m doing on World Vasectomy Day is opening up conversations about men’s role in family planning. What we’ve done is offer to do vasectomies for free for any man who is willing to go public.”

Why the emphasis on vasectomies as opposed to other forms of birth control? Well, ladies, raise your hand if you’ve ever experienced some shitty side effects of birth control. (At 17, I spent my first three months on the pill waking up and curling into the fetal position on the bathroom floor from nausea and dizziness. Not to mention the worst skin of my life! Hooray!) The beauty (or injustice, depending on your perspective) of the human anatomy is that man parts are more easily accessible than lady parts, which makes long-acting or permanent contraception methods for men both less risky and easier-to-perform than options for women.

“A vasectomy draws a man into the realm of reproductive responsibility, something which has traditionally been the role of women,” says Stein. “[But] the contraceptives that women use all have a set of risks … [And] tubal ligation for women is a more difficult procedure, it has a higher failure rate, it has a greater complication rate, and when it fails it often results in a tubal pregnancy rather than a healthy pregnancy. So it really behooves men to step up to the plate.”

I’m a feminist, and also just a decent human, so I figured: If I’m going to advocate for men to take some reproductive responsibility, I’d like to confirm that their options don’t suck. I took it upon myself to watch the livestreaming of three (3) vasectomies, performed by Dr. Stein, on World Vasectomy Day.

Here is what I can report: It appears to be significantly more comfortable than getting, say, a Pap smear. Or, for a comparison both sexes can appreciate, a teeth cleaning.

okay. we're getting a little spray anesthetic appetizer because of "the anxiety that needles near the scrotum generate." fair!

oh boy… here we go. erin, patient #1, is giving an interview by skype WHILE undergoing vasectomy. this is magnificent multitasking.

"honestly, i'm having fun talking to you now on camera. it's barely registering that i'm having a surgical procedure at the moment." – erin

wait. erin is already standing. either dude is a top contender for the chillest vasectomy patient of all time or it's really not a big deal

ok! this is moving so fast! it's alfredo's turn!!

WOW ok full shot of scrotum. there is smoke!! alfredo is not even breaking a sweat

shockingly i do not feel faint but do kind of wish i weren't eating yogurt right now. SORRY sorry.

"do you want to watch any of it, luis?" "no, that's fine." FAIR. it really seems like this is harder for the audience than the patient

ok, dizziness is setting in with each subsequent shot of surgical scissors. FOR ME!! NOT LUIS!! luis is a champ.

"the vas deferens is about the width and length of a piece of cooked spaghetti. it takes a while to empty those guys out." YOOOOOO

luis is up! for the record i have just watched three vasectomies happen in the time it took me to have breakfast. #worldvasday

In conclusion: If you’re a dude, and you’ve decided that your child-having years are over — or you’ve thought long and hard about it and you don’t want any children at all — the physical procedure of locking your sperm in the garage is actually not such a big deal. And if safe sex is going to be easy and hassle-free for everyone involved — well, it just makes sense that both parties should be willing to participate equally in making it so.

So, men, I can tell you with some certainty: Your options are fine. Great, even. And your one trip to the urologist would mean far fewer to the gynecologist for us. If you happen to get a chance to watch a live-stream of a speculum in action**, you might understand why that’s a pretty fair deal.

**For the record, I am not volunteering for this.