In the wild and wonderful world of birth control, the male condom tends to get a bad (w)rap. They can be conspicuous — there is no better way to inadvertently scream to a roomful of people, “HELLO, LADIES AND SIRS, I’M HAVING SEX!!!” than to have a couple of shiny foil squares explode out of your purse while trying to pay for a coffee.

But here’s the thing: Say you don’t like how hormonal forms of birth control make you feel, and you’re not ready to commit to something like an IUD. If you’re trying to keep a VACANT sign hanging over your uterus, condoms are an excellent, excellent option – and the only one that effectively protects against STDs. They also require almost zero commitment — all you have to do is keep them handy.

Which is where, as I talked about with Meika Hollender, co-founder of Sustain Condoms, prophylactic usage can start to suffer. Hollender and her father, Jeffrey — the founder of Seventh Generation — have launched Sustain, a line of sustainable condoms. They’re the only Fair-Trade certified condom sold in the United States, sourced from a single rubber plantation in southern India that uses eco-friendly practices, and are free of nitrosamines, a carcinogenic chemical.

All that is great! But I’ll be totally honest — for all of my green(ish) inclinations and consciousness, it has never once occurred to me to consider the environmental impact of a condom. What was way more interesting to me — and has the potential for significantly larger ramifications, environmentally speaking — is the marketing premise for the brand: Getting women to feel more comfortable purchasing condoms.

“[This] was something that we found and confirmed in our research: The preconception of a girl who’s carrying condoms is negative,” Hollender told me. “Guys will maybe admit that, at the end of the day, it’s nice if [a woman] has them. But if she has a lot, if she has too many, if they’re out, if they’re super accessible — they read into all of that.” 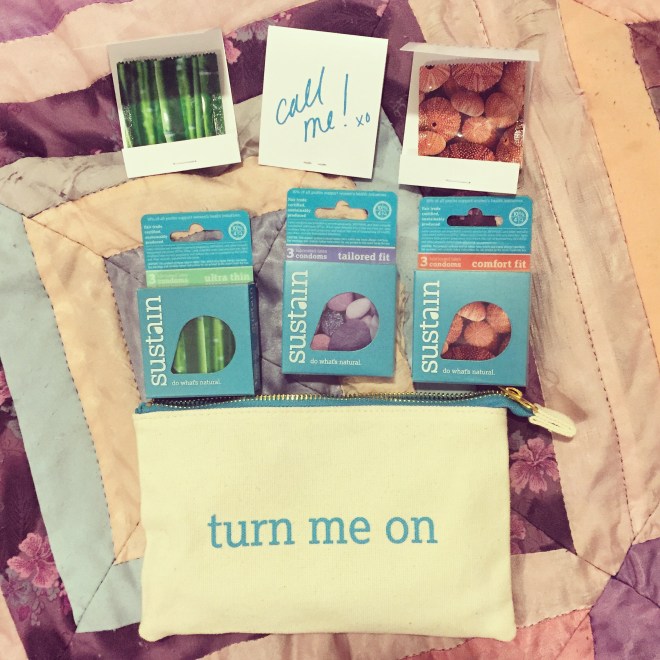 A grab-bag assortment, if you will, of Sustain condoms.Grist / Amelia Bates

If there’s any doubt that women are hesitant to use condoms, the statistics back it up. As of 2010, only 16 percent of women who use any form of birth control use them as a first-line method of contraception, which is down from 20 percent in 1995. Granted, that decrease isn’t as alarming when one takes into account the increase in the use of hormonal birth control methods and IUDs. But it’s still pretty alarming when taking into account that 37.8 percent of women between 15 and 44 don’t use any form of contraception at all.

I sat down with the Hollenders to find out a bit more about how they’re trying to change the condom-buying game for women. A condensed and edited version of our conversation is below:

Q. Some might interpret the assumption that women respond more to sustainability- and environment-centered advertising campaigns as sexist. How would you respond to that?

A. Jeffrey: I think that it’s confusing to think that we’re taking advantage of something when in fact, the bottom line is that condom companies have been focused on men for decades, and have largely ignored women.

Meika: I mean, the sustainability decision and the marketing decision are not necessarily related. Obviously, Jeffrey’s legacy is in sustainability — so no matter what product we were making, we were going to make the most sustainable version of that product.

[Without] asking about sustainability at all, we spoke to 500 women last summer and asked them: “How do you feel about condoms? How do you feel about buying them? Do you feel like you can relate to any of the brands out there, are they talking to you? Does the packaging appeal to you?” And there was such a clear [response]: “No, we feel left out of the conversation, we feel like [it’s] male-focused.” And we realized: Wow, not only are usage rates going down among women, but they feel alienated from a lot of the brands that are selling condoms, and that’s a huge problem.

What we’re trying to do is destigmatize contraception — rebrand birth control, almost — to make women feel really good about buying and carrying condoms, and also help them understand that their sexual health is a critical component to their overall health. I think that message and education has been lacking over the past few decades.

Q. Are you working with any other organizations or campaigns to attack this issue from an education/awareness standpoint?

A. Meika: That’s the big question, right? How do we change attitudes and behaviors around this issue — and I definitely don’t think we’ve figured that out, obviously, because we’ve only been around for a couple of months.

One thing that we are already doing is working with organizations like Planned Parenthood. We give 10 percent of our profits to women’s reproductive health organizations. The National Campaign to Prevent Teen and Unplanned Pregnancy [for example] has a campaign called Bedsider, where young women on campuses are hosting events and sessions around contraceptive options. We’ve just sent like 10,000 condoms and educational information to their campus rep. Those are the types of partnership that we’ve started to develop that we’re working on, and we’re going to see how they pan out.

Another thing is, I don’t think there are many — if any — great women role models in this area. Other than Lena Dunham, nobody’s talking about safe sex regularly and openly, in terms of what we’ve seen.

Jeffrey: There’s a lot of research to support that if people you respect and look up to model a certain type of behavior, you’re far more likely to imitate that kind of behavior. [Dunham] is not making it seem like sex is always way sexier with condoms — the truth is, that’s not always the case. She does it in such an honest way, and that’s what we need more of.

Q. So how has this lack of open conversation about sex — and particularly safe sex — affected your strategy?

A. Jeffrey: One of the things that has generated the most media attention about [Sustain] is the fact that a father and daughter are in business selling condoms, and that is so strange. That’s a perfect paradigm for what’s wrong with our society, because it should be comfortable and OK — why should condoms be such a taboo thing?

Meika: I think it’s because sex is taboo.

Jeffrey: I think it’s really eye-opening to how backward, Victorian, and repressed our society is when it comes to sex, and I think it’s why we see all the problems we see.

Meika: And something that’s very motivating for me — but also crazy to me — is… that now this has become a political issue. For someone like me, as a 26-year-old, things that I took for granted — access to contraception, the freedom to decide if I ever wanted to get an abortion if I needed one or wanted one — is now being questioned. It’s like we’re really clearly moving backwards, and … people are starting to get frustrated and see that these issues are real and we need to talk about them.