Is your bank funding the Dakota Access Pipeline? Here's how to find a new bank. 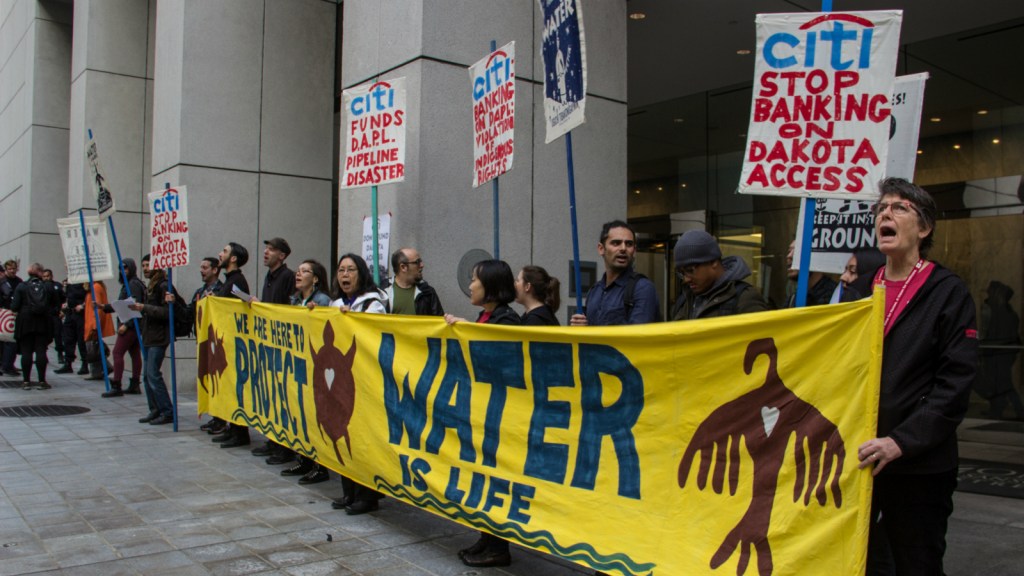 Is your bank funding the Dakota Access Pipeline? Here’s how to find a new bank.

I’ve been looking to switch banks for some time and the recent events in North Dakota have made my desire to fire Bank of America all the more urgent. I’m having a hard time finding information about banking institutions that are financially supportive of environmentally sustainable and socially responsible projects — or even banks that aren’t bankrolling dirty energy projects. For someone who is interested in changing banks, but who still needs some of the perks a big bank can offer, what are the best options?

When it comes to banks, we tend to pay the most attention to the stuff that directly affects us: interest rates, overdraft fees, whether or not our local branch gives away free lollipops (or is that just me?). It’s easy to overlook the fact that banks do a lot more than just babysit our hard-earned dollars. They also get their fingers in all kinds of investments and deals, including those that support energy projects such as the Dakota Access Pipeline — a 1,172-mile pipeline that would carry oil from North Dakota across four states, and carry a whole lotta polluting and racist baggage too. This controversial project would not be possible without cash from a number of big banks.

So welcome to the latest episode of Big Banks Behaving Badly! You’re right that Bank of America is one of the institutions funding the company that’s building the Dakota Access Pipeline — along with dozens of other banks, including Citibank, Wells Fargo, Goldman Sachs, and JPMorgan Chase. Environmentalists are targeting those banks and calling on them to halt the funding, and one Norwegian bank is now considering pulling out of the project.

You’re also right that plenty of the biggies support other fossil fuel development projects, from coal mining to deep-water oil drilling. This 2016 report card from the Rainforest Action Network grades the major banks on exactly this, and finds that many of them — including Bank of America — deserve to be sent to summer school.

So if we want our banks to better represent our green values, we know who not to patronize. But who is worthy of handling our stacks? Here are a few options:

Big banks that support renewable energy
The megabanks aren’t exclusively funding fossil fuels; many are also backing solar and wind power projects. Bloomberg has checked into which institutions have been supporting renewables and cutting their own carbon emissions. European banks are leading the way, but JPMorgan Chase cracked the top 10 in 2014. Still, even as Chase and other banks put money into renewables, they continue to show up as bad actors on RAN’s fossil-fuel report card. If money talks, these banks are talking out of both sides of their mouths — so read on for alternatives.

Credit unions
I’m a huge fan of credit unions: They’re nonprofits, they usually offer excellent interest rates and low fees, and they invest in local projects rather than dirty international dealings. I’m not sure what perks you’re looking for, Meredith, but credit unions offer plenty of services just like the Wall Street outfits do — so I encourage you to check out what’s available in your area.

Community development banks
You say “socially responsible projects,” I think “community development bank.” These institutions (which can also be credit unions) might not focus specifically on eco-friendly investments, but they do make a point of serving the financially underserved: local people, institutions, businesses, and nonprofits that might not qualify for loans elsewhere. These aren’t available everywhere (though I did find one in Philly); search here to see if there are options near you.

Best of luck in your quest for a new home for your money! Switching banks takes a little bit of logistical wrangling, but it’s well worth the, er, investment (here are tips and step-by-step directions). And make sure to tell your current institution exactly why you’re bailing. How will things ever get better if the big guys don’t know what they’re doing wrong?