Move over Beyonce, it’s time to make room for another Queen B. And her name is Susannah Austin. 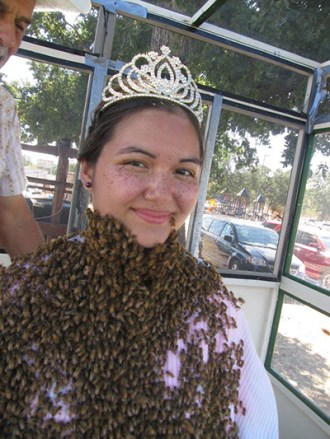 In a recent article in Modern Farmer, the Bee Queen and Bee Princess Elena Hoffman were profiled to talk about their niche interests. And nothin’ says niche interest like allowing insects with stingers to hang out on your neck. Here’s a bit from the article:

People think of two things when it comes to bees, she says. Honey and stinging. During visits to FFA groups and classrooms, the queens often bring a demonstration hive borrowed from a local beekeeper. And to convince audiences of the docile nature of honeybees, they’ll sometimes demonstrate a bee beard: allowing thousands of the insects to crawl on their neck and face while they discuss the hive.

Bee royalty like Austin and Hoffman have been parading around the U.S. since the late 1950s. The first American Honey Bee Queen, Kay Seidelman, was crowned in ’59. Their tasks are similar to most agriculture pageant queens, such as the highly coveted title of Tulip Queen in my hometown of Pella, Iowa (PUT THOSE PETALS TO THE METAL, GIRLS!). They travel to state fairs, schools, city governments, and other regional events to give talks and demonstrations promoting beekeeping.

Back in the ’50s and ’60s, the queen and princess spoke primarily about promoting honey production — but as bee numbers have been steadily dropping in past decades, the women focus their speaking on the issue of colony collapse disorder (CCD).

There are lots of initiatives that are trying to combat CCD on a local to a national scale, but we’re glad that young people like Austin and Hoffman are out there fighting for the bees. And sorry, Beyonce, as much as I adore ya, I don’t think you’re ready for this royal jelly.