There are plenty of ways to gear up for a safe bike ride after dark, from pulsing head- and tail lights to decking out your spokes in bits of reflective tape. But when battery-powered lights suddenly lose their juice mid-ride or you find yourself out without your reflective clothing, nighttime biking can get hairy in a hurry.

Enter Emily Thibodeau, owner of the Boston repair shop Hub Bicycle, who has found a way to turn your bike into one giant reflector. Her latest venture, Hub Powderworks, is currently the sole company licensed to coat entire bike frames in a special type of newfangled, super reflective paint. The Boston Globe explains:

Thibodeau is using a new generation of highway paint patented by Indianapolis-based Halo Coatings. The technology uses hundreds of thousands of tiny spheres, embedded in the top layer of the coat, to reflect light back to its source — instead of diffusing it, as regular paint does. In San Francisco, Mission Bicycle Company is using the Halo coating on one of its bike models that retails for $1,245.

Right now, Hub Powderworks’ paint comes in one color, Zakim Gray, named for Boston’s Leonard P. Zakim Bunker Hill Memorial Bridge. The paint appears light gray during the day, but shine a car’s headlights on it at night and it glows a striking pale blue. It’s bright, really bright, but not meant to replace extra lights and reflectors entirely — you want drivers to be able to see you even when they aren’t shining their headlights on you, after all. 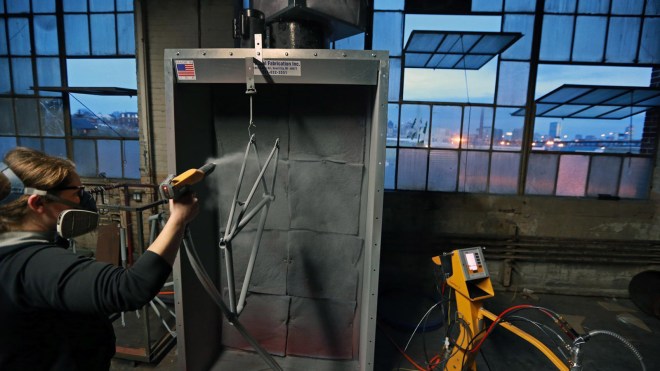 Thibodeau cooked up her new enterprise with help from her friend Joshua Zisson, a lawyer who specializes in cases involving cyclists — and who happens to be partner in Halo Coatings’ company, too. As Zisson told Globe reporter Stefanie Friedhoff, he’s been trying to make reflective paint more available to bikers for years:

“Almost all of my cases involve a version of an accident in which the driver did not see the bike rider,” Zisson said. “I never understood why highway paint was not on every bike already. The safety benefits of this technology are tremendous.”

Getting a bike frame coated in the reflective paint is expensive — upwards of $500 a pop — but if you can afford it, and you’re willing to dismantle your ride (and live without it for a few weeks), you can mail it in. Thibodeau and Zisson are toying around with the idea of selling bike accessories covered in Zakim Gray paint, too.

In the meantime, for those riders who don’t have the cash for a fancy schmancy new paint job, Grist’s own Greg Hanscom has some tips for night-riding that you can check out here.

No matter how you decide to trick out your steed, be it with highway paint or with LED lights, shine on and stay safe, you crazy bikers.

No one sucks on climate change like Australia, mate