Have you ever done a Big American Road Trip? I haven’t, really. There was the drive I took out to Seattle when I moved here, crossing over endless miles of snowy tundra in North Dakota and Montana, and one sweltering summer week spent driving up the northeastern coast, but that’s about it. As for the rest of the gorgeous weirdness that makes up this bizarre country of ours, well, I’ll have to try to see it for myself eventually.

But I do know that the mind-blowing geographical variation across the United States mirrors its extreme political disparities — which means reproductive rights deviate wildly across state lines. A woman seeking reproductive healthcare living in Texas, for example, has an extremely different experience from one living in Washington.

So, this week we’ll explore exactly what regressive reproductive health legislation looks like in some of our reddest states. And to chase that upsetting information, we’ll show you a weird, beautiful thing from that state — without ever having to get in a car to see it!

SHOT: In Missouri, where a 72-hour hour waiting period for abortions has recently been signed into law, a state senator is trying to block a master’s student’s dissertation examining that ban’s effect on pregnant women.

CHASER: As if Missouri’s abortion laws weren’t terrifying enough, the state is also home to the World’s Largest Goose. Have you ever encountered a normal-sized goose? Already terrifying! So I want to know who is responsible for this nightmare: 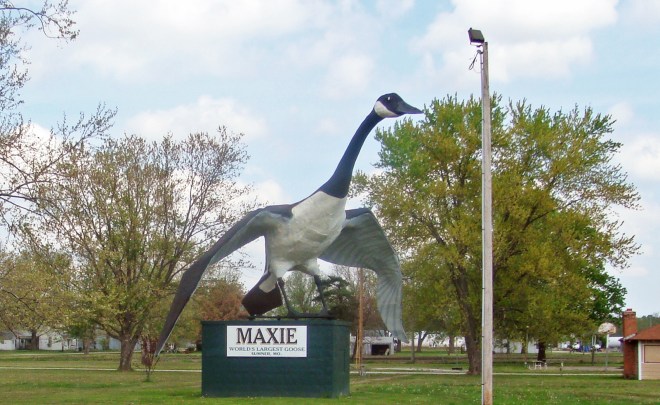 SHOT: Today, the Supreme Court announced it would hear a case concerning the constitutionality of limiting access to abortion clinics in Texas. Lots of abortion providers have been forced to close their doors due to new, highly restrictive state standards for facilities. Meanwhile, “crisis pregnancy centers,” which attempt to dissuade pregnant women from getting abortions, are proliferating across the state. (For more on how this case got to the Supreme Court, check out this timeline.)

CHASER: Don’t worry, (heterosexual) Texas ladies — you may have to travel hundreds of miles and fight off anti-choice evangelists if you want to get an abortion, but you can enjoy the male version of Hooters. The tastefully dubbed “Tallywackers” is located in Dallas and staffed entirely by scantily clad dudes. However, I did some research on the restaurant, and found this most concerning and bewildering fact via Yelp: “They don’t have regular pickles?!” What kind of pickles do they have? The imagination runs wild.

SHOT: South Dakota’s abortion laws are so regressive that there are actually no doctors in-state that provide voluntary abortions — they have to fly in from Minnesota. From Minneapolis-St. Paul’s alt-weekly City Pages: “Think of it as Haiti after the earthquake. South Dakota has legislated itself into the Third World.”

CHASER: If you need something to cheer you up after THAT fun fact, look no further than South Dakota State University, whose dairy program allegedly invented the “Cookies ‘n Cream” flavor of ice cream in the 1970’s. While it’s hard to confirm who decided to mix Oreos into ice cream for the first time, it’s not hard to confirm that this was a great idea. Say what you will about their unsavory politics — this state knows its sweet treats!

EXTRA FUN FACT OF THE WEEK! Do you have an IUD? Congratulations — in terms of popularity, your chosen form of birth control is the fastest-growing in the United States. Fun fact: The only other forms of birth control that are becoming more popular are the contraceptive ring and patch and … withdrawal?

Reminder: Abortion is legal and you shouldn’t be paying for birth control