As any denizen of the internet will tell you: There are dank memes and then there are bad memes.

Bad memes: Anything on frackfeed.com

Frackfeed is a budget bin Buzzfeed created by North Texans for Natural Gas, a natural gas lobbying group that aims to “give a voice to those who support natural gas.” As they say: When a disenfranchised group needs a voice, let them have memes. 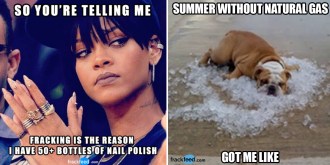 In addition to memes, Frackfeed offers #millennialfriendly content like listicles and quizzes. Want to know which Friends character you are? Frackfeed has got you covered, even though — as far as we know — Central Perk has nothing to do with natural gas extraction. Frackfeed also want you to vote for a candidate in the 2016 election named, yes, Fracking — perhaps the dark horse third-party candidate the nation has been waiting for!

At first glance, a website using celebrities, fuzzy animals, and MS Paint to praise natural gas might seem like some fairly high-effort pandering by a lobbying group. Upon closer inspection, however, you will find the still-warm corpse of internet comedy.

But, hey — if you can’t pay BuzzFeed to make listicles for you, as Shell did this week, you might as well create your own.

Our reporters peek behind the curtain at the national political conventions