Less than 12 hours after the Miami Republican presidential debate, Marco Rubio found himself grilled for a second time by CNN on climate change. The night before, Rubio responded to a question on climate from Miami Republican Mayor Tomás Regalado, who, as an appropriately concerned Floridian, acknowledges and cares about the science and policy causing his city’s flooding. “Well, sure, the climate is changing and one of the reasons why the climate is changing is the climate has always been changing,” Rubio said Thursday night. Which is really all you need to know to get a sense of his position on climate.

“Why not embrace the science though?” asked CNN’s Chris Cuomo Friday morning. “You didn’t speak to that specifically last night. The science to 99 percent of the community is clear. It’s something that’s seen as a future perspective. Why don’t you share it?”

“OK, there is a consensus among scientists around the world that humans are contributing to what’s happening in our climate,” said Rubio. “What there is no consensus on is how much of the changes that are going on are due to human activity, in essence the sensitivity argument.”

“You know, here’s the bottom line,” Rubio continued. “We don’t know how much of it is due to human activity, and that’s relevant in the policy world because they are asking me to support public policies that, by their own admission of the climate activists, these climate policies they want us to adopt would not have a measurable impact on the ecology or the environment now or for the foreseeable future, meaning in my lifetime, yours, or my children’s.”

It’s the kind of answer that has a whiff of nuance. Unfortunately for the senator, it’s also incorrect. Here’s what the sensitivity argument actually looks like, when adapted from the 2013 IPCC report, the world’s authority on climate science: 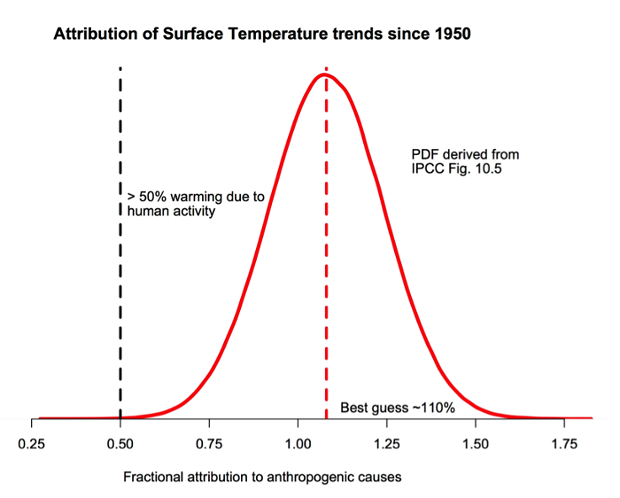 The probability density function for the amount of warming since 1950 attributable to human causes. RealClimate

The IPCC explains: “It is extremely likely that more than half of the observed increase in global average surface temperature from 1951 to 2010 was caused by” greenhouse gas emissions and other human factors. Another way to think about it is the chance that humans are not the major cause of warming is improbably low, at less than 1 in 10,000.

But the science doesn’t tell us which policies to pursue. Climate policy is hard. Because Rubio has one thing right: Something like the Clean Power Plan won’t prevent a certain number of inches of sea level rise in his lifetime. But that’s also not the point. Climate policy requires looking past the immediate-term. For some communities, climate change is here, right now. For others, the effects won’t be felt for a century. Rubio bills himself as taking a courageous stand against consensus, but it’s more courageous to trust the science and stand up for people who haven’t yet been born.