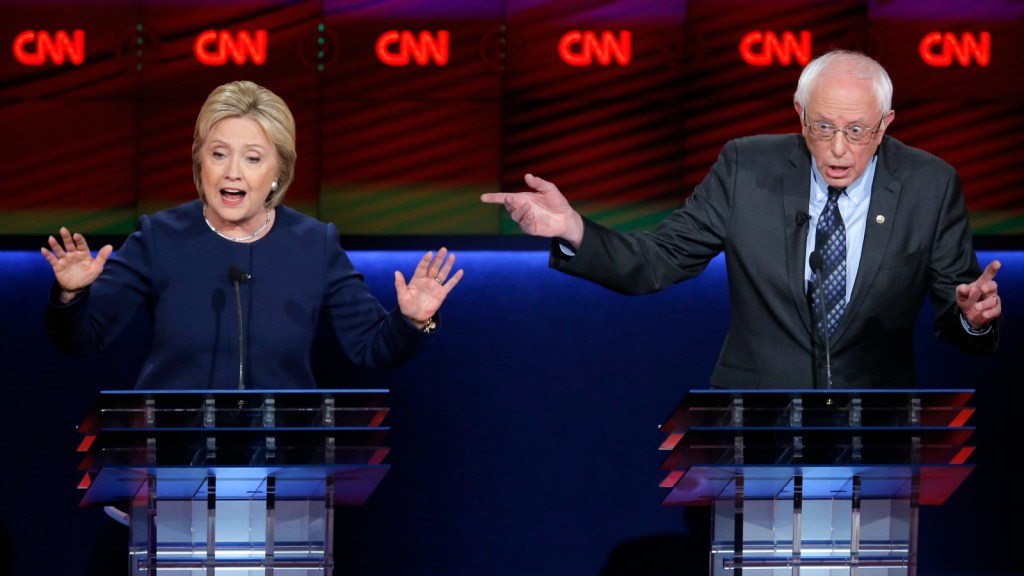 After being ignored by presidential debate moderators throughout the entire campaign thus far, climate change finally got some attention at Wednesday night’s Democratic debate. And the topic provoked a surprisingly controversial remark — one accidentally inspired by yours truly.

Hillary Clinton’s response to a climate question included this claim: “The Clean Power Plan is something that Sen. Sanders has said he would delay implementing.”

On its face, that looks to be just plain wrong. Digging deeper, it turns out to be a misleading interpretation of a very different Sanders proposal — one first reported by me.

Remember: Sanders is a strong supporter of climate action, one of the Senate’s most vocal leaders on the issue. He has unveiled a detailed and ambitious climate action platform. And he has praised the Obama administration’s Clean Power Plan (CPP), designed to limit carbon emissions from coal-fired power plants, and voted against congressional efforts to delay or block it.

After the debate, Politifact, the fact-checking arm of the Tampa Bay Times, asked the Clinton campaign what her source was for the allegation. Much to my surprise, their answer pointed to an article that I wrote. Last month, I reported on steps Sanders would consider taking to limit fracking through executive action. Sanders has called for a ban on fracking, but that would require action by a Congress likely to be controlled at least partly by Republicans, so I asked what he would do if he didn’t have congressional cooperation. Two examples the Sanders campaign staff gave me, among the six that made it into my piece, pertained to the Clean Power Plan: extending the duration of a program under the CPP that gives states emissions credits for renewable energy generation, and regulating methane as well as carbon through the CPP.

The Clinton campaign argues that the latter of those two amounts to a proposal to delay the CPP because it would require revoking the current rule. “Rewriting the Clean Power Plan in the way Sen. Sanders has proposed after the plan has already been finalized would necessarily require a significant delay,” Clinton spokesperson Jesse Ferguson wrote to me in an email. “The inevitable and unfortunate outcome of this proposal from Sen. Sanders as described in your article would be to delay the Clean Power Plan and that is what Hillary Clinton was referencing.”

They are not alone in seeing it this way. After my article came out, some legal scholars wrote blog posts criticizing Sanders on those same grounds. Ann Carlson, an environmental law professor at UCLA, finds Sanders’ proposal to be a risky gambit that would not only mean stopping the CPP in its tracks but potentially losing a friendly panel on the D.C. Circuit Court that is currently slated to hear the big legal challenge to the CPP. Carlson writes:

Revising the Clean Power Plan would cause significant delay in its implementation simply because of the procedural requirements of notice and comment (ignoring for a moment the increased controversy it would ignite against an already controversial plan). And delay in reducing greenhouse gas emissions is problematic on at least two fronts: the longer we delay implementation, the more expensive reductions become, and delay makes it more difficult to achieve our Paris commitment to achieve 26 to 28 percent reductions in our emissions by 2025. Sanders would sacrifice these practicalities to get greater reductions in emissions over the long run. He would also probably lose the D.C. Circuit panel of judges currently hearing legal challenges to the CPP, a panel that includes at least two judges likely to accord the administration significant deference in its choice about how to regulate greenhouse gases under the Clean Air Act.

This is a valid point. Every major new regulatory requirement EPA imposes requires a public comment period. Carlson also rightly notes that expanding the CPP to cover methane leakage outside the walls of a power plant would exacerbate the plan’s greatest legal liability, which is the way that it regulates the emissions from a state’s whole electricity system rather than just emissions from each individual plant.

But Carlson, Clinton, and other critics are treating Sanders’ proposal as if it were an ironclad promise, rather than one option among many. Sanders’ first-order position is that he will lead a “political revolution” that will change the makeup of Congress and make it possible to pass legislation to rein in fracking and carbon emissions. That would moot the need for the tweaks to the CPP that his campaign mentioned to me. His campaign only came up with the proposal for a CPP expansion in response to my query about what he would do without help from Congress. (Both Carlson and Politifact write, incorrectly, that I interviewed Sanders. I did not and my article contains no quotes from Sanders. Rather, I talked to members of his campaign staff.)

In light of this kerfuffle, I asked the Sanders campaign to respond to the assertion that their idea for CPP expansion amounts to a proposal to delay the plan entirely. They say that, in light of Sanders’ record, it’s silly to interpret his proposed CPP revisions as an automatic delay. If Sanders assumed office and couldn’t get his bill to curtail fracking through Congress, he would look at a broad palette of potential executive actions and weigh their respective costs and benefits. If a Sanders administration determined that expanding the CPP to cover methane would require significantly delaying the rule or threatening its viability, then it just wouldn’t do it.

“Our thinking was to get as much out of the Clean Power Plan as possible, not to impede its progress,” says Karthik Ganapathy, a Sanders campaign spokesman.

The way Clinton phrased her comment at the debate was especially disingenuous. Rather than saying that Sanders has proposed changes to the CPP that would require delaying its implementation — which would be technically defensible — she accused him of simply proposing to delay it, as if that were the whole point. Politifact ultimately found the Clinton campaign’s explanation unpersuasive and rated her statement “False.”

Nonetheless, there is more to this story than just the Clinton campaign trying to mislead Democratic primary voters into thinking she is to Sanders’ left on climate change. There is also a real policy disagreement between the candidates. On Wednesday, immediately after claiming Sanders wants to delay the CPP, Clinton said, “We need to implement all of the president’s executive actions and quickly move to make a bridge from coal to natural gas to clean energy.”

Whereas Sanders thinks the current CPP’s implicit promotion of natural gas is a bug, Clinton sees it as a feature. Clinton simply doesn’t agree with Sanders that ramping up natural gas use is something best avoided. Clinton reasons that gas is better than coal: when burned, it emits half as much carbon as coal, and dramatically less conventional pollution.

But environmentalists have been moving away from this view over the last few years as the air and water quality risks of fracking have come to light, as well as the high rate of methane leakage that happens before natural gas gets to power plants. Methane is a far more potent greenhouse gas than carbon dioxide in the near term.

Jamie Henn, a spokesperson for 350.org, issued a statement after the debate calling the natural-gas-as-bridge-fuel idea “a concept that even natural gas’ strongest supporters in the environmental community have all but abandoned.” He continued, “I cringed when I heard her mention natural gas as a bridge fuel. Scientists are now clear that natural gas is a bridge to nowhere and that we must move directly and swiftly to 100% renewable energy.”

Clinton would counter that she endorses tight regulation of methane leakage, and that under those and other conditions she would impose, fracking would be very limited. Clinton sees Sanders’ opposition to natural gas as letting the perfect be the enemy of the good. Much like her contention that we shouldn’t delay the CPP to strengthen it, Clinton would argue that we need to get off coal right away and renewables aren’t ready to fully take its place, so gas is a fine interim solution.

Climate activists, who mostly lean toward Sanders, increasingly believe that without an economy-wide price on carbon pollution, the only answer is restrict the production of fossil fuels, which will drive up their costs. If renewables are cheaper than fossil fuels, the thinking goes, the market will make sure there’s enough clean energy.

Perhaps the most telling thing about Clinton’s comment on Wednesday isn’t about her climate policies at all. It’s that Sanders has her sufficiently nervous and defensive that her campaign is drawing on a little-known writer’s article on an environmental news website to concoct an attack on Sanders that pretends to come from the left. Climate hawks could see this as an ironically good sign. Clinton clearly feels the need to neutralize the threat from Sanders on climate, which means the issue has some salience — at least among Democrats.