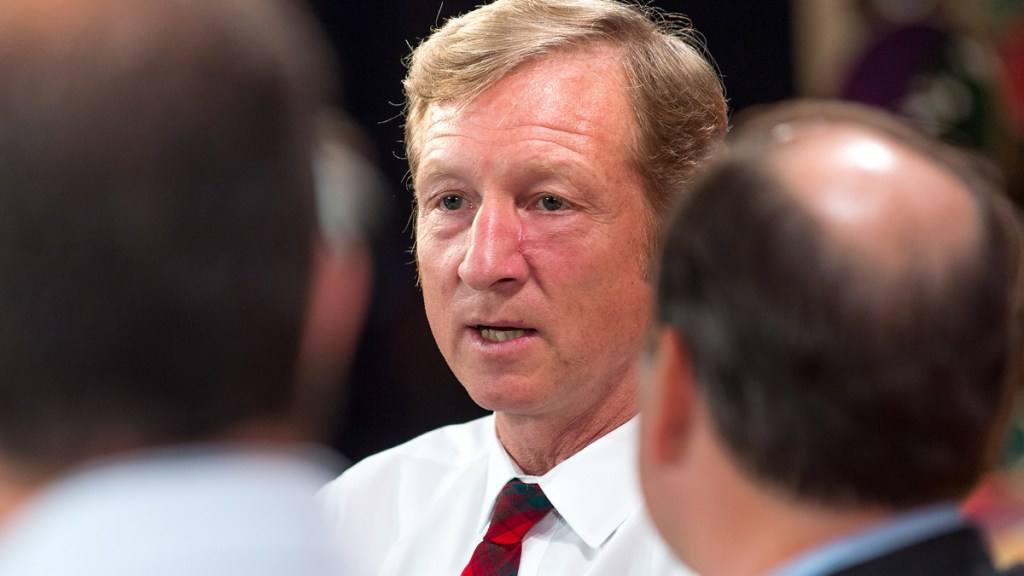 As Grist’s Ben Adler told you in February, billionaire climate activist Tom Steyer is spoiling for an expensive battle against politicians who are standing in the way of climate action. Steyer plans to funnel about $50 million into campaigns this year to support climate-friendly political candidates and attack the climate-denying variety. His super PAC, NextGen Climate, expects to raise that much again from other like-minded donors, for a total war chest of $100 million — a vast amount that Adler pointed out will nonetheless pale in comparison to the fossil fuel industry’s spending on its candidates of choice.

The Washington Post reports on newly released details about Steyer’s plans for 2014:

The independent efforts run by his super PAC, NextGen Climate, will include television ads, on-the-ground field organizing and get-out-the-vote operations that seek to mobilize voters on the local impacts of climate change. The group plans to highlight issues such as drought in Iowa and the rising cost of flood insurance in Florida. It will also spotlight the climate-change skepticism of GOP Senate and gubernatorial candidates, and the campaign donations they have received from the fossil-fuel industry.

So far, the list of targeted Republicans includes Senate hopefuls Cory Gardner in Colorado, Terri Lynn Land in Michigan and Scott Brown in New Hampshire, as well as governors Rick Scott of Florida, Paul LePage of Maine and Tom Corbett of Pennsylvania. The group also plans to target the GOP’s Senate nominee in Iowa.

NextGen Climate said in a press release that it will use three main tactics:

Deploying climate as a wedge issue to turn out key voters — particularly persuadable voters and drop-off voters who are traditionally absent in mid-term elections.

Targeting extreme Republican candidates who deny basic science and are beholden to the special interests of the fossil fuel industry.

Providing significant resources to support candidates who are on the right side of climate policy.

Here’s a map showing the races into which NextGen Climate plans to pour its money: