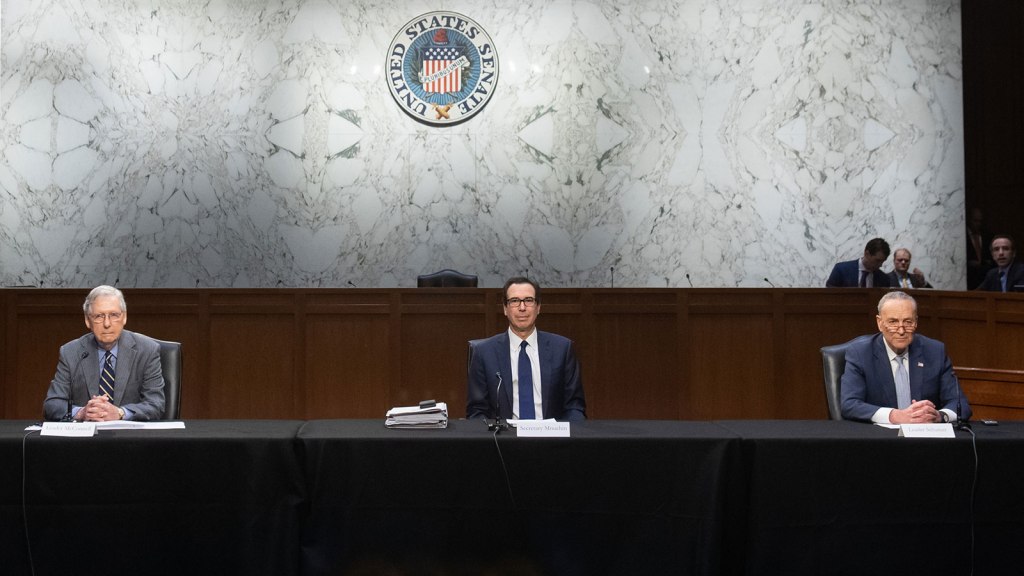 After more than a week of squabbling over what should go into the third coronavirus relief package, the White House and Senate leaders reached a compromise on Tuesday night. And while no climate-friendly provisions made it into the $2 trillion stimulus bill, it wasn’t necessarily bad news for the planet either.

In the days leading up to this near-final bill, much of the debate centered around Democrats’ attempts to include certain green provisions, like support for the struggling renewable energy industry, and a requirement that a bailout for airlines be contingent on emission reduction promises.

The fight broke down into a sandbox tussle on Monday when Mitch McConnell accused Democrats of delaying relief for hospitals and struggling Americans in their pursuit of the Green New Deal, while Democrats argued that if the government was going to bail out the oil industry by purchasing $3 billion of oil for the Strategic Petroleum Reserve, why not help other hurting energy industries, too? The clash seems to have ended in a draw, as neither the oil bailout nor any clean energy or emissions reduction measures are in the most recent version of the bill. The only thing that stuck was $32 billion for the airline industry — no strings attached.

In the midst of the negotiations, a coalition of scientists, academics, and advocates from the environment, justice, and labor movements penned a letter to Congress with their own “menu of solutions” to make the stimulus a win-win for the economy and the environment.

The letter criticizes the American Recovery and Reinvestment Act of 2009, the stimulus package signed by President Obama during the Great Recession, for centering companies over workers, and it offers almost 100 policy interventions to improve on that model. If you’re someone who thought the Green New Deal sounded nice but weren’t sure what it meant in practice, I encourage you to check this letter out. The proposals are highly specific and cover everything from creating jobs to reducing emissions to shoring up communities that are vulnerable to the effects of climate change.

The ideas range from the familiar, like creating green jobs in clean energy, construction, the food system, transportation, and manufacturing, to the creative, like expanding funding for the National Endowment for the Arts to support out-of-work artists and makers. There are layers of proposals within each of the umbrellas I just mentioned, like providing direct funding to transit authorities to help them through the slowdown, changing zoning regulations to promote dense development, providing no-interest loans for local governments to build parks, supporting indigenous farming practices and protecting native seeds, and ending fossil fuel subsidies and directing those funds to help workers transition to new jobs.

The letter’s authors aren’t the only ones thinking about how the country could bounce back from coronavirus while getting ahead on climate change. Grist staff spoke with seven experts with more ideas for a green stimulus. While most called for short-term measures similar to the ones Democratic senators fought for, in the long term many wanted to see major investments in clean energy infrastructure with a focus on hiring from and serving under-resourced communities and communities of color.

Even though the $2 trillion stimulus that Congress is voting on this week is void of consideration for the planet, experts are saying it will probably only get us through the next few months. That means many of these ideas could still come into play in future legislation.