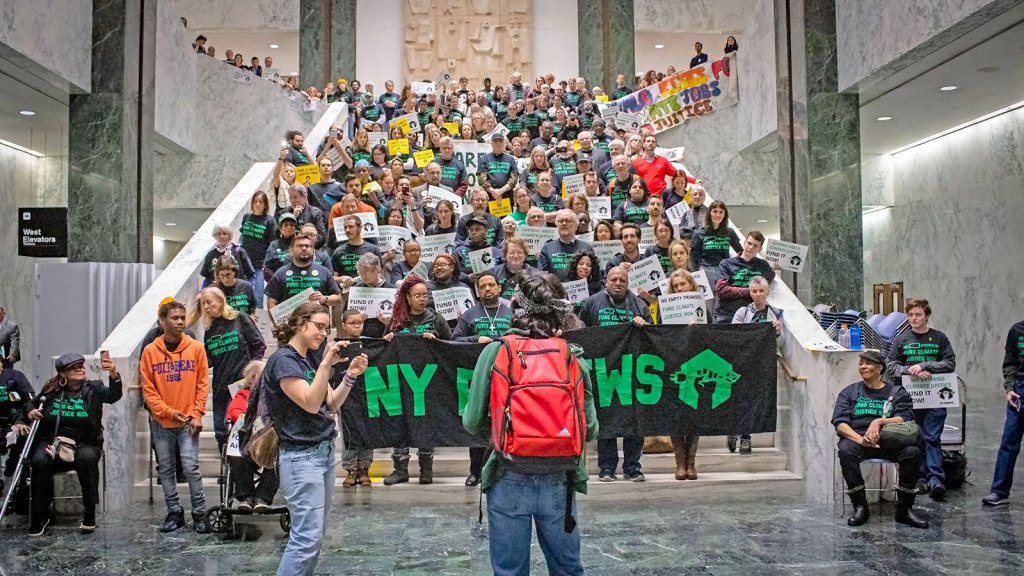 By law, New York has to protect communities from climate change. Cuomo’s budget ignores that.

Nearly 300 climate activists from across New York State gathered in the halls of the capitol building in Albany late last month during an environmental conservation hearing. They formally submitted testimonies to the committee, spoke with Assembly members, and rallied inside the building, occupying the lobby and one of the grand staircases. They were there to tell New York Governor Andrew Cuomo that they’d noticed he had some unfinished business with regard to the state’s climate policy.

The rally came after Cuomo released his 2021 budget proposal. Although it included a $33 billion, five-year plan to fight climate change, environmental groups were surprised to see that the budget didn’t mention anything about protecting vulnerable communities from the climate crisis — even though the state is required to do just that under the Empire State’s ambitious new climate law, Climate Leadership and Community Protection Act (CLCPA).

The CLCPA, which commits the state to net-zero emissions by 2050, was signed last July and officially went into effect on January 1, 2020. The final version of the bill was not exactly what advocates had hoped it would be. They envisioned it as the state’s version of the national Green New Deal: sweeping legislation that would curtail the state’s greenhouse gas emissions and transition to a greener economy while also addressing racial and economic issues. But last-minute changes made by Cuomo slashed the original bill’s social justice and labor provisions — making it look a lot less like the federal Green New Deal.

What the CLCPA does contain, however, are provisions to address climate impacts on disadvantaged communities. The law says that state agencies, authorities, and entities shall direct resources “in a manner designed to achieve a goal for disadvantaged communities to receive forty percent of the overall benefits of spending on clean energy and energy efficiency programs, projects, or investments” and “no less than thirty-five percent.” But Cuomo’s spending plan for fiscal year 2021 does not mention anything with regard to that provision.

In a letter to state representatives, New York Renews — a statewide coalition of nearly 200 advocacy groups — expressed their disappointment in Cuomo’s spending plan. “You passed a law designed to protect communities, but the governor’s budget does not include the funding necessary to do so,” the group wrote. “The governor’s status quo climate budget ignores disadvantaged communities as if the CLCPA was never signed into law.”

“Low-income communities and communities of color across New York State have consistently faced the worst impacts of pollution and climate change, yet the Governor’s budget does not meet the standard set by the CLCPA that at least 35 percent of climate and energy spending target frontline communities,” NY Renews coalition coordinator Stephan Edel told Grist in an email. “This is a grave oversight, but there’s still time to fix it.”

As part of the solution, NY Renews is pushing for the Climate and Community Investment Act, which would fine corporate polluters. The money generated by that fine would go to large-scale renewable energy projects, updates to the electric grid, environmental justice community projects, energy-efficient transit systems, helping low-income New Yorkers with their energy bills, and providing financial assistance to workers and nearby communities when fossil fuel infrastructure closes. Since it will take time for the Climate and Community Investment Act to go into effect and begin collecting money from polluters, New York Renews is demanding a $1 billion Climate and Community Investment Fund to be added to this year’s budget to jumpstart spending to benefit low-income communities.

In response to a request for comment from Grist, a representative for Cuomo said in an email that state agencies, in coordination with a new Climate Justice Working Group, will figure out how to devote at least 35 percent of clean energy funding to disadvantaged communities as required by the CLCPA.

State budget negotiations between Cuomo and the legislature will continue through March and will be finalized by March 31. New York Renews is committed to pushing its demands: On February 28, the group is set to gather around 300 activists to visit state legislators within their districts to talk about the budget and the Climate and Community Investment Act. It also plans to start working with the Climate Action Council, a policymaking body that was created under the CLCPA and is set to convene for the first time this month to begin setting specific emissions reductions targets for the state.

“We’re hopeful that the Assembly and Senate budgets will include new spending for climate justice and frontline communities, and that those provisions will be included in the final New York state budget,” Edel said. “Make no mistake, we’ll continue to fight for climate, jobs, and justice at every step of the process.”