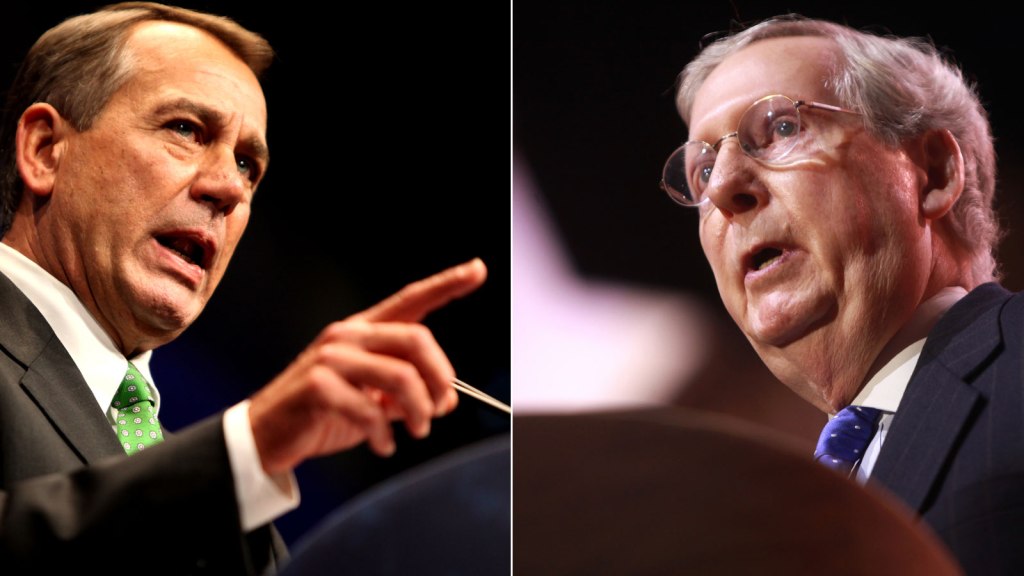 In what has recently become a common ritual in American politics, Congress’ Republican majority is moving forward with its own set of appropriations bills, rather than negotiating a budget with President Obama or the Democrats in Congress. Surprise! Their bills take extreme positions — for corporate interests; against public health and safety. In particular, the appropriations bills governing the Environmental Protection Agency (EPA) and Department of Interior (DOI) would decimate environmental spending and repeal huge chunks of federal regulatory authority — including, crucially, EPA’s ability to regulate greenhouse gas emissions under the Clean Air Act.

Republicans in both the House and the Senate have written and passed the EPA/DOI appropriations out of their respective appropriations committees on party-line votes. There are slight differences between the House and Senate versions, but the basic contours and spending levels are the same. Both would drastically cut spending to hold it down to the levels laid out by the sequestration process defined in the Budget Control Act of 2011.

Remember sequestration — the fall-back budget-cutting plan designed to be so broadbrush and draconian that both parties would come to terms on a real deficit-reducing plan rather than face such a politically painful outcome? Thanks to Republican unwillingness to raise tax revenue, sequestration actually went into effect; we’re still living under it. Now Republicans are simply demanding that domestic spending cuts under sequestration be maintained, while the defense budget is allowed to grow. Meanwhile, they are attaching “policy riders” to the environmental appropriations bills that would take us back to the days before President Nixon signed the Clean Air Act and Clean Water Act.

But the GOP has a problem: They don’t control all the levers of power. President Obama won’t sign any budget that repeals the EPA’s authority to regulate climate pollution. Senate Democrats, who can filibuster appropriations bills, won’t allow it to pass anyway. Nor will Senate Democrats agree to such severe budget cuts. In a press conference Thursday, Senate Minority Leader Harry Reid (D-Nev.) said, “Republicans know full well that Democrats cannot and will not support bills they are bringing to the floor … They know the President said he’s going to veto them.”

Nonetheless, the contents of these Republican appropriations bills matter. They lay out the Republican baseline for budget negotiations, which sets the agenda — or at least half of it — for the ultimate budget compromise. And some of the smaller policy riders could make it into the final version. These bills also tell us what Republicans would do if they controlled the White House and Congress.

There are two main ways that congressional Republicans are trying to undermine environmental protection in their budget bills: through spending cuts that make it practically impossible for EPA and Interior to do their jobs, and through policy riders that make it explicitly and legally impossible.

Relative to Obama’s budget requests, the Republicans would cut roughly $2.2 billion total from the two agencies — around half from each — to stay in line with the sequestration spending levels. Here’s what that would mean:

That would mean that we couldn’t meet our climate pledge from the 2009 Copenhagen Accord of an economy-wide 17 percent drop from 2005 levels by 2020. That, in turn, would undermine our international credibility to negotiate a stronger deal in Paris this December. As OMB notes, “Failing to address climate change will also exacerbate poverty and contribute to environmental degradation in developing countries, potentially resulting in resource shortages, political instability, and conflict.”

And that’s all just the spending cuts. The policy riders are even worse, because they don’t just make it difficult for agencies to carry out their mission, but they actually ban them from doing it. There are around a dozen important policy riders in both the House and Senate bills, but here are the biggest ones:

And you know how most Republicans feel about cracking down on power plants, factories, and cars. Their bills would stop EPA from lowering the ozone standard until 85 percent of “non-attainment” counties — meaning counties not yet in compliance with the current standard — have reached compliance. Aside from the apparent arbitrariness of the 85 percent figure, this doesn’t make sense intellectually. Even if we have a lot of catching up to do, the scientific finding regarding what level of ozone is safe for human health simply is what it is — it isn’t changed by the fact that our air is far worse than that in many places. As Sierra Club legislative director Melinda Pierce puts it, “They’re saying we have to make a baby step before assessing the level of safe pollution for humans.”

Despite having to fight a war to protect progress on multiple fronts, environmental lobbyists are surprisingly optimistic. Republicans simply don’t have the votes in the Senate to get their way, nor control of the White House. Their only lever to force Obama and the Senate Democrats’ hand is to threaten to shut down the government — but when they did that in 2013 it damaged their popularity.

That doesn’t mean they won’t do it again: after all, they didn’t suffer any consequence in the 2014 midterms, and the average Republican congressman’s biggest fear is losing a primary to a Tea Party challenger, not a general election to a Democrat. On the other hand, their desire to win back the presidency might lead the GOP to be more careful about damaging their party brand going into a presidential election year. Moreover, Republicans are riven by internal divisions between their extremist and establishment wings, and they may not even be able to get their whole party on board for this far-right legislation.

“There are Republican members of Congress for whom you can’t cut EPA funding enough,” says Taurel. “But with such big cuts, you won’t find Democratic votes for this bill. So [Republicans] need to keep their caucus together, and it’s hard to find a [budget] number that doesn’t lose either moderates or conservatives.” If they fail to pass the EPA/Interior bill when it comes to the floor of the full House for a vote, they will be in a much weaker position when negotiating with Obama and the Senate.

Taurel is probably being overly optimistic, though: The number of Republican moderates who support clean air and clean water has dwindled to almost none. The most likely outcome is that Republicans will pass their budget, and it will be up to Senate Democrats and the president to stand firm.