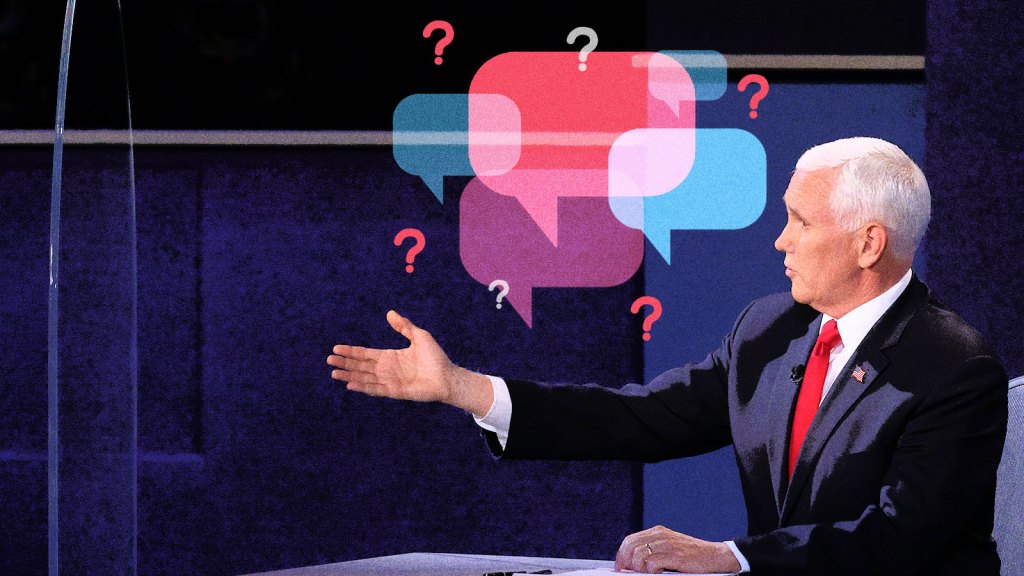 The exchange lasted seven minutes. Harris gritted her teeth and talked about green jobs. Pence repeatedly accused the senator of supporting a Green New Deal that would “crush American energy” and claimed Biden wanted to ban fracking. He revived old climate-denier tropes with lines like: “The climate is changing. The issue is, what’s the cause?” In almost the same breath, he praised the Trump administration as pro-science and pro-environment.

While Harris spent the climate change section largely running away from stances she adopted in the primaries, Pence stretched the truth on multiple occasions. So there were quite a few climate-related claims that could use some clarification. Here’s a quick fact-check of the vice president’s comments on our overheating planet.

“What’s remarkable is the United States has reduced CO2 more than the countries that are still in the Paris climate accord.”

Oh boy. First of all, virtually every other country in the world is still in the 2016 Paris climate agreement, in which nations agreed to take steps to limit global warming to 2 degrees C (3.6 degrees F). At last count, 190 of 197 nations in the world had ratified the agreement, with the exception of Iran, Turkey, and a few smaller countries like Eritrea and Yemen. (The U.S. is technically still a party to the agreement as well, at least until the day after the election.)

On the one hand, the U.S. has dramatically cut carbon emissions: According to the International Energy Agency, U.S. emissions stemming from energy use dropped by close to 1 gigaton between 2000 and 2019. In absolute terms, that was the biggest drop by a single country over that period — a factoid that led to the conservative website Daily Wire’s February headline “United States led entire world in reducing CO2 emissions in 2019.”

But the primary reason the U.S. registered such a big drop is that America is one of the biggest, most irresponsible spewers of carbon dioxide in the first place. We have the highest emissions per person of any country in the world, and the second-highest emissions overall, trailing China. Percentage-wise, the U.S. has only cut emissions by a measly 3 percent, while countries like Germany managed to slash their carbon pollution by 8 percent or more. (Not to mention Denmark, which cut its economy-wide CO2 emissions by 37 percent!)

It’s kind of like bragging that you cut your mile time to 10 minutes — when your nearest competitors are easily running 6-minute miles.

“The both of you repeatedly committed to abolishing fossil fuel and banning fracking.”

At a CNN town hall last year, when Harris was still a presidential candidate herself, she did mention supporting a fracking ban. The idea, however, never made it into her climate plan. Joe Biden, meanwhile, has never vowed to ban fracking — and even if he wanted to, he legally couldn’t. The president can no more ban fracking than you or I could have gotten that fly off Pence’s head: Ninety percent of fracking takes place on private lands, where it would require an act of Congress to halt the practice. Biden has promised to halt fracking on public lands, but that’s hardly going to stop the flow of natural gas into American homes and power plants.

As for fossil fuels, Biden has arguably committed to abolishing them from the electricity sector: His “Build Back Better” plan calls for electricity to be generated by 100 percent clean energy by 2035 (although part of that goal could be met by fossil fuel plants using carbon capture technology to eliminate emissions while still using the same fuels). Biden has also called for the country to reach net-zero carbon emissions by 2050, which means that if any fossil fuels are still in use, their emissions will need to be removed from the atmosphere somehow. But “abolishing fossil fuels” entirely? Not in the next four years.

“There are no more hurricanes today than there were 100 years ago.”

Potentially true, but misses the point.

This is a tricky one. According to one analysis, hurricanes in the continental U.S. haven’t significantly increased in number since 1900 — but other researchers cite a moderate upward trend. (It’s hard to analyze how many hurricanes there were a hundred years ago, since the only available monitoring was provided by passing ships.)

In general, though, the frequency of hurricanes isn’t what matters most; it’s their intensity that dictates how many Americans will have their homes flooded and possessions swept away. Scientists believe that, as the climate warms, the overall number of hurricanes will remain the same or even decrease slightly — but the number of severe storms will increase. Warmer ocean temperatures could fuel higher winds and even cause storms to slow down over land, amping up storm surges and increasing flooding.

Whether or not hurricane frequency is increasing over time, 2020 is a strange time for Pence to be suggesting that we aren’t seeing more storms. For the first time in 15 years, we’ve run out of letters in the standard alphabet for tropical storms.

“Our air and land are cleaner than any time ever recorded. Our water is among the cleanest in the world.”

Let’s just establish this once and for all: Clean air and clean water are important. They are also not solutions to climate change. We could have the cleanest air and water in the world, but if we’re still spewing carbon dioxide into the atmosphere, the planet will keep heating up well past the limits that scientists and policymakers agree are necessary to prevent catastrophic consequences.

The U.S. certainly has cleaner air than it did before the Environmental Protection Agency came into existence 50 years ago. Administrator Andrew Wheeler declared in June that “Americans are breathing the cleanest air since 1970,” and data released by the agency seems to back that claim up. But when it comes to our water, the U.S. ranked outside the top 25 in safety of sanitation and drinking water in the Environmental Performance Index compiled by Yale and Columbia Universities.

Oh, and the Trump administration has systematically dismantled approximately 100 environmental rules, many of which were aimed at keeping toxic substances out of that supposedly crystal-clear air and water. So there’s that.