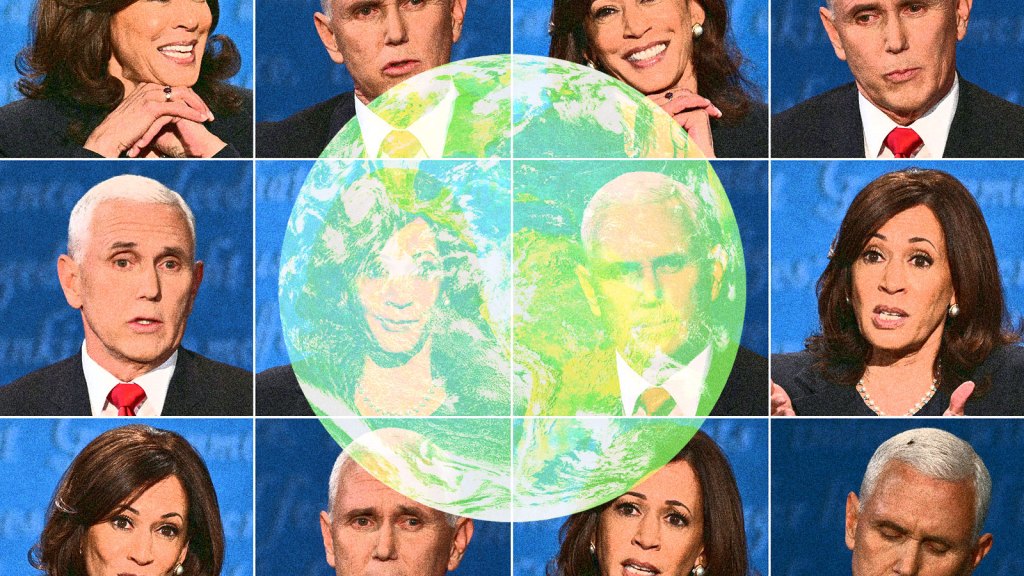 Maybe that’s because last week, when Chris Wallace broke 12 years of debate question silence on the issue during the painful interruption contest between Joe Biden and Donald Trump, he forced the candidates to extrapolate on the subject for nearly 10 minutes. The exchange caught the president (and us!) a tad off-guard. So this time, the vice-presidential hopefuls had talking points at the ready.

Both Pence and Harris rushed to paint themselves as pro-science — not a surprising goal given that in 2020, more acres have burned in the western U.S. than ever before, hurricanes are tearing through the alphabet at record speed, and a global pandemic has killed more than 200,000 Americans. But despite their environmental claims, both candidates seemed most concerned with painting their ticket as sufficiently pro-fracking, bickering repeatedly about Joe Biden’s supposed position on the practice.

Here’s how it all went down: Just 30 minutes into the debate, Harris used a question about the economy as an opportunity to take a stab at the current administration’s failure to pass meaningful legislation rebuilding U.S. roads and bridges. She then touted Biden’s “Build Back Better” plan to create millions of jobs in infrastructure projects and renewable energy.

“There was a time when our country believed in science,” the California senator said, referencing Biden’s planned investment in research and development.

But Pence wasn’t about to let his opponent get away with using the words “jobs,” “science,” and “renewable energy” without a fight. He struck back with one of the two “worst” environmental epithets of the night: Green New Deal supporter.

“They want to bury our economy under a $2 trillion Green New Deal,” he said of his opponents, referencing the price tag on Biden’s climate plan (which is inspired by, but hardly identical to, the so-called Green New Deal resolution introduced by Senator Ed Markey and Representative Alexandria Ocasio-Cortez). Pence went on to falsely claim that a Biden administration would ban fracking and abolish fossil fuels altogether, costing the country hundreds of thousands of jobs.

Harris did not mince words in response. “Joe Biden will not ban fracking,” she said. “He’s been very clear about that.” (Not only has Biden said he doesn’t want to ban fracking, he does not have the authority to do so, as it would require an act of Congress.) Nevertheless, Pence kept the lie going throughout the evening.

Minutes later, Page officially turned the debate over to climate change, first asking Pence whether he believed that climate change posed an existential threat. Just as he did when asked the same question last year during an excruciating interview with CNN, Pence dodged and weaved his way around the matter.

“The climate is changing,” Pence said. “The issue is: What is the cause? And what do we do about it? President Trump has made it clear that we’re going to continue to listen to science.”

Pence recycled claims made previously by various members of the Trump administration: namely, that “our air and land are cleaner than any time ever recorded,” the Paris Agreement was a bad deal for the U.S., and that Biden and Harris want to “abolish” fossil fuels. He also downplayed the role of climate change in 2020’s long list of major disasters such as wildfires and hurricanes. Instead, he called for better forest management and noted that hurricanes are not actually more frequent than they were 100 years ago (both technically true, but incomplete assessments).

From a pro-science standpoint, Pence’s climate statements left much to be desired. And yet Harris, despite her strong record on climate policy, did not seem particularly eager to fill the environmental void. Rather than tout the two environmental justice bills she recently introduced in the Senate, she barely spoke about any of her or Biden’s climate policies (aside from green jobs). Instead, she spent the majority of the climate portion of the debate trying to convince the American public that Biden was NOT GOING TO BAN FRACKING!

Without going into exactly how, Harris offered this dual promise on behalf of her ticket: “We will achieve net-zero emissions by 2050, carbon-neutral by 2035,” she said. “Joe has a plan.”

She just wants to make sure you understand that plan is NOT the Green New Deal.