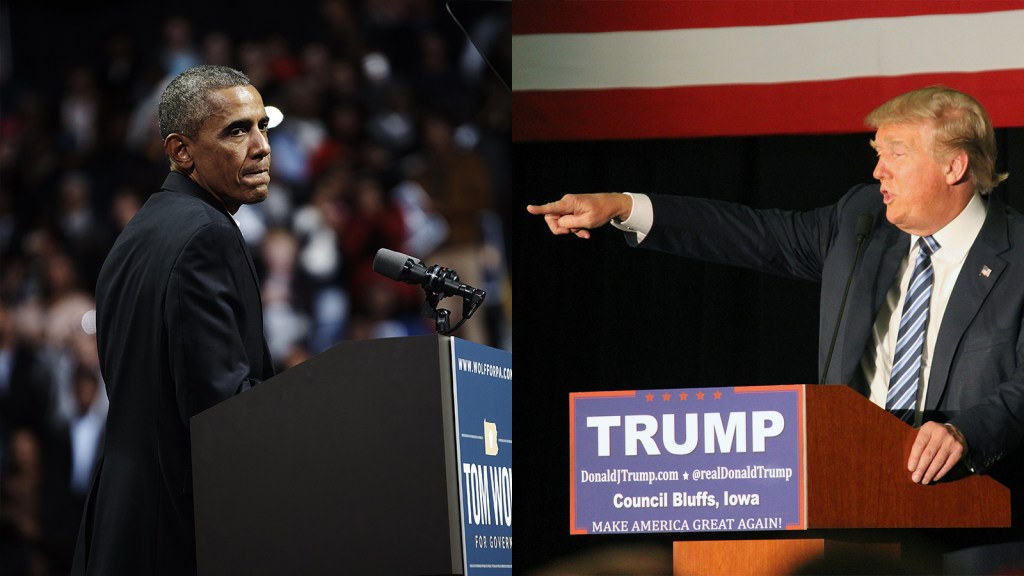 In Sunday’s New York Times, op-ed columnist Ross Douthat argues that we should pin responsibility for Donald Trump’s success not only on the disarray of the Republican elites but also, somehow, on President Obama.

There are a lot of problems with that analysis, but let’s focus on the part with implications for climate change. Douthat writes:

[Trump] is rallying a constituency that once swung between the parties, but that the Obama White House has spent the last eight years slowly writing off. Trump’s strongest supporters aren’t archconservatives; they’re white working-class voters, especially in the Rust Belt and coal country, who traditionally leaned Democratic and still favor a strong welfare state.

These voters had been drifting away from the Democratic Party since the 1970s, but Obama has made moves that effectively slam the door on them: His energy policies, his immigration gambits, his gun control push, his shift to offense on same-sex marriage and abortion.

Douthat is articulating a version of the dishonest “Obama has abandoned the white working class” meme that has circulated in the conservative media since the 2012 election. If you look at the 2008, 2004, and 2000 election results, you’ll find that Appalachian whites have voted increasingly Republican, and they were especially opposed to Obama before he took office. But you don’t even need to look it up, because Douthat himself goes on to concede that “bigotry inclined some of these voters against Obama from the start, or encouraged them to think the worst of him eventually.”

Douthat makes it sound like the alienation of blue-collar white voters from the Democratic Party — aside from some who opposed Obama out of racism — is driven by how Obama provoked them with policy shifts, like finally beginning to crack down on climate pollution and backing same-sex marriage. Though the columnist acknowledges that the migration of less-educated whites out of the Democratic Party has been going on for decades, he leaves out just how central this backstory is to today’s divisions.

In 1964, President Lyndon Johnson signed the Civil Rights Act. Johnson predicted that it would cost his party the South for a generation. Sure enough, even though Johnson beat anti-civil rights Republican Barry Goldwater in a popular vote landslide that year, Goldwater carried five southern states. In 1968, Republican Richard Nixon’s Southern Strategy was to move rightward on social issues such as civil rights, anti-Vietnam War protests, and crime. Nixon won, and a decade later, Ronald Reagan followed his lead, adopting other reactionary social views, such as opposition to abortion and gay rights, to expand the GOP’s appeal to populist white voters, especially southerners and evangelicals.

Most of the Democrats’ alleged white working class problem is actually just a problem with white Southerners — who, as Johnson predicted, now overwhelmingly vote Republican. Outside of the South, non-college educated whites — college education is the imperfect proxy that political scientists use for class — are much more evenly split between the parties.

That regional difference between white voters in the South and the North is driven by racism. The Times’ polling specialist, Nate Cohn, notes, “[Trump] fares best in a broad swath of the country stretching from the Gulf Coast, up the spine of the Appalachian Mountains, to upstate New York … His strength in the South is blunted only by Ted Cruz in Texas … It is similar to a map of the tendency toward racism by region, according to measures like the prevalence of Google searches for racial slurs and racist jokes, or scores on implicit association tests.”

So it’s ludicrous to suggest that Trump’s fans are people who would still be voting Democratic if only Barack Obama had not disrespected them by trying to slow climate change or introduce modest gun safety measures. These are voters the Democratic Party lost long ago over opposition to civil rights, women’s rights, gay rights, fear of immigration, and other social change. Their loyalty shift has nothing to do with opposition to environmental protection — that’s why Nixon signed the Clean Air Act and Clean Water Act.

The flaws in Douthat’s political and historical analysis are matched by distortions and omissions in his presentation of the election’s legal and policy contexts. Douthat accuses Obama of “using every available end-around to make domestic policy without any support from Congress.” That’s a shot at the Clean Power Plan, among other Obama policies.

Conservatives frequently assert that Obama’s effort to regulate carbon emissions via executive authority, since he can’t get Republicans in Congress to pass a new law, is a provocative power grab. In fact, EPA is required by law to regulate air pollution. Under George W. Bush, states that were concerned about climate change had to bring suit against EPA demanding that it do its job under the Clean Air Act and regulate carbon emissions if science shows they endanger human health. The law on this is so clear that even a conservative-majority Supreme Court ruled against the Bush administration in Massachusetts v. EPA (2007) and held that, following an endangerment finding, carbon pollution must be regulated.

So Obama isn’t stretching the boundaries of the law; he is finally bringing the government into compliance with it. It’s also not true that Obama lacks “any support from Congress” for carbon regulation or his other domestic priorities. He has support from roughly half of Congress — the half represented by Democrats. Those Democrats, by the way, actually received more votes for the Senate than did their Republican colleagues. Democrats just hold fewer Senate seats from those votes, thanks to the institution’s rural bias.

Douthat writes as if the only calculation that could possibly have informed Obama’s policies was how many non-college white voters he would lose versus how many minority and college-educated voters he would gain. He doesn’t even consider that a politician who takes responsible governance seriously — unlike the leading Republican candidates — might also care about an issue’s substance. It’s possible for a president to develop policies not simply for electoral rewards but because he finds that the empirical evidence and expert opinion support them.

Obama didn’t decide to start regulating carbon and tighten restrictions on conventional pollutants in a factual vacuum. He looked at what science tells us about the gathering catastrophe of climate change and about the health effects of related problems such as smog exposure — especially on children in low-income areas. He might even have considered the hundreds of millions of impoverished residents in climate-vulnerable developing countries.

Douthat’s argument is that if Democrats do anything that doesn’t cater to the ignorance, backwardness, or bias of a subset of uneducated white voters, then they have provoked whatever half-baked move — like supporting Donald Trump — those voters make next. “Look, it’s the Democrats’ fault, too,” says The New York Times’ genteel, reasonable-sounding conservative columnist.

No, it isn’t, and it certainly is in no way a reaction to the Clean Power Plan or any other element of Obama’s energy policies. Obama has largely embraced fossil fuel development: permitting expanded offshore drilling, continuing until last month to lease fossil fuel extraction on public land for below-market rates, and failing to investigate possible water contamination from fracking. But while expanding fossil fuel supplies, Obama has cut down on domestic fuel demand through rules like auto efficiency standards, the Clean Power rule, and incentive programs for renewable energy production.

Hillary Clinton and Bernie Sanders needn’t fear that going beyond Obama’s policies with more serious restrictions on fossil fuel extraction will somehow trigger an even greater Trumpian backlash. There’s simply no evidence that Obama’s energy policies provoked this one. Trump’s appeal isn’t about energy policy or anything else so wonky. It’s about racism, sexism, homophobia, xenophobia, Islamophobia, and other bigotries that progressives cannot and should not indulge, placate, or excuse.