Elizabeth Warren's new climate plan can go the distance, even if her campaign can't 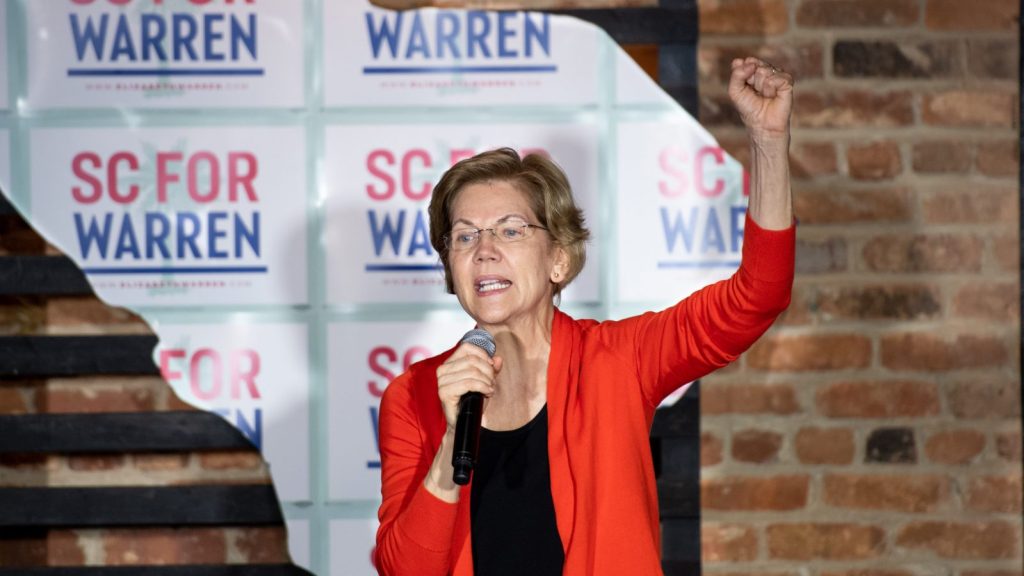 Elizabeth Warren’s new climate plan can go the distance, even if her campaign can’t

Elizabeth Warren once again trailed her top competitors in Saturday’s South Carolina primary. Another poor showing on Super Tuesday — the day when the greatest number of Democrats can go to the polls — could spell the end of her presidential aspirations.

But regardless of what happens to the Massachusetts senator this week, her climate plans, some of the most detailed and thoughtful in the primary, could live on — much like those of Jay Inslee, the campaign’s original climate candidate, who left the race last August. (Warren, among others, adopted elements of the Washington State governor’s climate platform upon his exit.)

That’s especially true of her latest proposal, aimed at stopping Wall Street from continuing to finance the climate crisis. As far as Warren’s climate plans go, this one is as on-brand as they come. Evoking the 2008 financial crisis, she writes in the plan, posted to Medium Sunday morning: “Once again, as we face the existential threat of our time –– climate change –– Wall Street is refusing to listen, let alone take real action.” (Larry Fink over at BlackRock might disagree, nevertheless, Warren persists.)

Many other candidates, including Warren herself, have previously unveiled climate risk-disclosure plans, designed to compel corporations to reveal to stockholders and the public potential climate-related liabilities to their business — ranging from fossil fuel investments on their books to parts of their operations with exposure to, say, sea-level rise. But this plan, introduced as the stock market continues to plunge amid coronavirus fears, is different in that it is aimed directly at Wall Street banks.

Climate change, she says in the Medium post, destabilizes the American financial system in two major ways: physical property damage (think the wreckage of coastal cities in the wake of catastrophic hurricanes or Western towns post-wildfires) and so-called “transition risks.” For those of you without a degree in economics, transition risks in the context of climate change means, for instance, investments in the fossil fuel industry that could suddenly lose value as the nation switches to a green economy. Theoretically, such a shift could create conditions for a financial meltdown.

“We will not defeat the climate crisis if we have to wait for the financial industry to self-regulate or come forward with piecemeal voluntary commitments,” Warren writes. So she suggests taking aggressive steps to rein in Wall Street and avoid financial collapse by using a number of levers at a president’s disposal — some old, some new.

First, she says, if elected, she’ll use the regulatory tools in the Dodd-Frank Act — enacted in the wake of the 2008 crash — to address climate risks. Specifically, she would ask a group created by that legislation — the Financial Stability Oversight Council, comprised of heads of regulatory agencies — to assess financial institutions based on their climate risk and label them “systemically important” where appropriate.

Next, she’d require American banks to self-report how much fossil-fuel equity and debt they acquire yearly, in addition to the assets they hold in that sector. She’d also mandate insurance companies disclose premiums they derived from insuring coal, oil, and gas concerns. She’d ask the Securities and Exchange Commission and Department of Labor, the two agencies in charge of regulating pensions, to identify carbon-intensive investments. Current pension systems, she writes, are “leaving all the risk of fossil fuel investments in hard working Americans’ retirement accounts.” In addition, she’d staff federal financial agencies with regulators who understand the connection between financial markets and climate change, “unlike Steven Mnuchin,” she says (seemingly unable to pass up the opportunity to drag Trump’s unpopular Treasury secretary).

Perhaps the most important piece of Warren’s plan concerns international cooperation, which echoes a theme in previous climate plans she’s introduced. She’d join other world powers in making climate change a factor in monetary policymaking, and prompt the Federal Reserve to join the Network on Greening the Financial System, a global coalition of central banks. And she’d make implementation of the Paris Agreement a prerequisite for future trade agreements with the U.S. “Addressing the financial risks of the climate crisis is an international issue,” Warren writes on Medium.

As is her calling card, Warren’s latest plan is designed to protect consumers from a potential financial bubble that could burst on the horizon. And if she’s unable to continue campaigning after this week, her competitors might be smart to heed her warning and give this plan a good look, particularly the international components. As John Donne famously wrote, no market is an island.